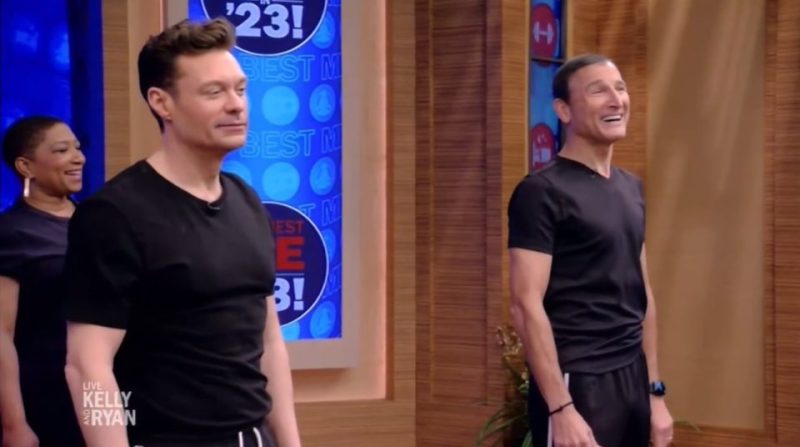 RYAN Seacrest has tried to sabotage a show producer during a segment on yoga poses.

The Live with Kelly and Ryan host, 48, got annoyed with producer Michael Gelman, 61, for being able to do a headstand and mimed pushing him over.

Ryan was presenting a segment called The Best Me in ’23! with yoga teacher Laura Kasperzak on poses that help to “promote balance and mobility”.

The presenter changed into a T-shirt and sweats and was joined by Michael, who was also in gym gear.

The trio attempted a couple of poses with Laura’s help on yoga mats live on air.

While Michael easily hoisted himself into a headstand, Ryan struggled to balance on his head.

He ran over to his colleague and mimed pushing him and blowing him over.

Laura was shocked by Michael’s skills, exclaiming: “Wow, look at that!”

Ryan looked more infuriated than ever and again mimicked blowing at Michael’s legs to try to get him off balance.

Also in the segment, he took a moment to confront his guest host, Live’s daily announcer, Deja Vu.

At one point, Ryan was struggling to do a yogi squat, having a slightly hard time keeping his balance.

The yoga teacher assured him that there was no “judgment” from him concerning the TV star’s difficulties.

Ryan then hopped up from his squat and leaned into Deja Vu’s face to say: “You hear that? No judging!”

Deja Vu replied, “Listen! I sit at the seat of judgment,” adding a giggle to break the ice.

Deja Vu occasionally fills in for Kelly Ripa, 52, as Ryan’s sidekick like she did back in August.

Kelly returned to work on Monday after being mysteriously absent on Thursday and Friday.

Despite returning to the show on Monday, Kelly still seemed under the weather.

ABCHe gave up and stood up, groaning ‘Oh my God!’ when he saw Michael’s perfect pose[/caption]