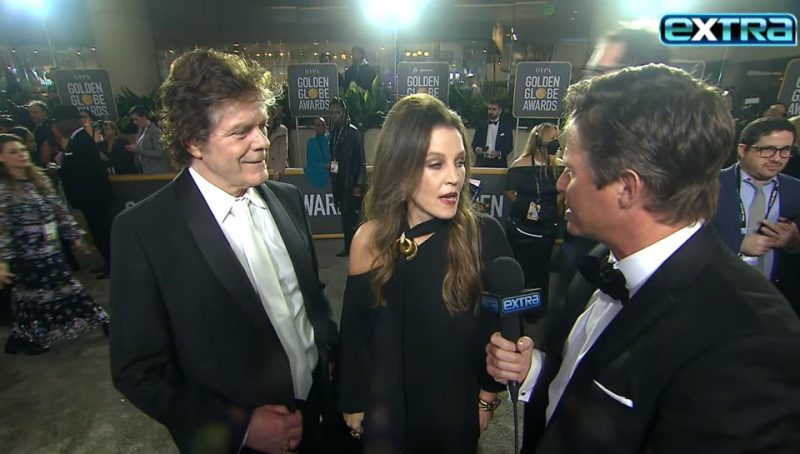 LISA Marie Presley had appeared unsteady and held onto a friend in one of her final interviews before her death on Thursday.

Elvis’ daughter died at the age of 54 after suffering a suspected cardiac arrest at her home in California.

She had appeared at the Golden Globes just two days prior to see Austin Butler pick up the best actor award for his portrayal of her famous father.

In one final interview, Lisa spoke slowly and appeared to slur her words at times after being asked about the movie.

Asked about her thoughts after seeing the movie Elvis for the first time, Lisa said: “I was mindblown, truly.

“I actually had to take like five days to process it.”

She said she “hoped” it would be a wonderful night for Elvis, adding: “I adore him [Butler].”

Extra’s Billy Bush, who carried out the interview, told NewsNation she seemed “off” during the chat.

Speaking after her death, he added: “We had two steps up onto our platform. I asked her, here let me lend you a hand to help you up.

“She was on the arm of Jerry Shilling…he was holding her arm.

“She was very much relying on his support for balance and she spoke very slowly.

“And I can tell you this, when the interview was over I said to my crew ‘something’s off.’

“There’s no question that she was off. She was a little slow.”

On Thursday, Lisa Marie’s mother, Priscilla Presley, confirmed the news of her daughter’s passing in a statement to People.

She said: “It is with a heavy heart that I must share the devastating news that my beautiful daughter Lisa Marie has left us.”

The actress went on: “She was the most passionate, strong, and loving woman I have ever known. We ask for privacy as we try to deal with this profound loss.

Paramedics had performed CPR on the singer at her home before taking her to the hospital for treatment.