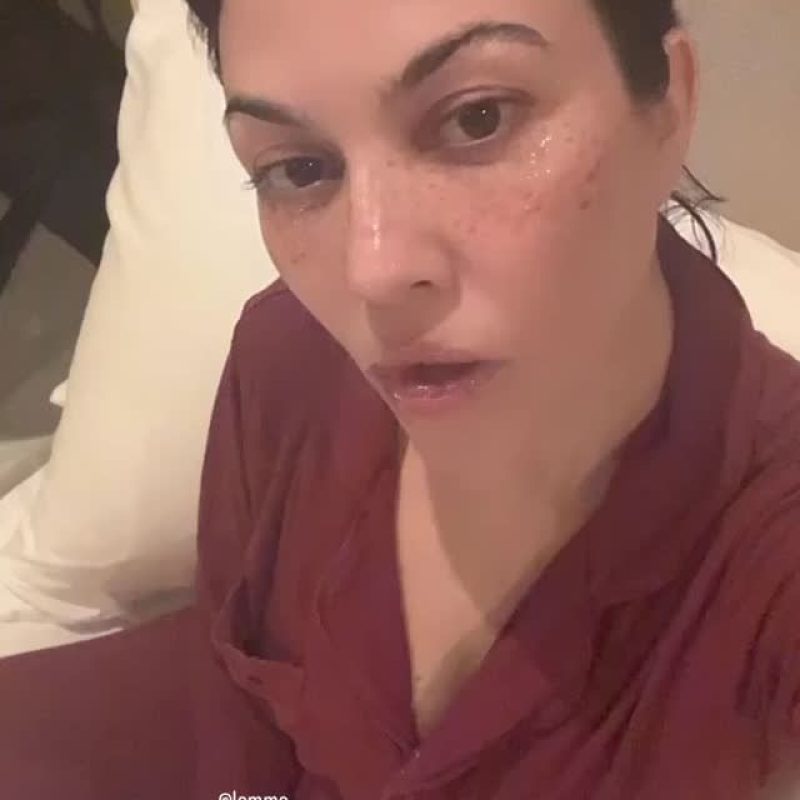 KOURTNEY Kardashian has shown off her fake freckles while displaying her makeup-free skin in a new video.

Kourtney, 43, appeared to be playing with the face filter in her Instagram Story.

The Kardashians star seemed to have freckles on her natural skin and had a sparkling twinkle next to her eye.

About thirty minutes before the strike of midnight, the Hulu star ditched her makeup and wore red pajamas.

Kourtney explained she was just “chilling” as she posed bare-faced for the camera.

The reality star promoted Lemme Chill and said: “I’m about to read some of your reviews and post some of my favs.”

At the end of the short video, the Lemme founder squinched her glam-free face and pouted her lips.

The TV personality has been working on her vitamin and supplement brand for the past five years.

During the launch, she shared in a lengthy post: “I’ve been dreaming of this idea, having lots and lots and lots of meetings and conversations with different people trying to figure out the best way to build this, the right partners and building the team that felt really good.”

After getting married in May 2022 in Portofino, Italy, the TV star became the stepmother to husband Travis Barker‘s children: Alabama, 16, and Landon, 18 – he shares both teens with his ex-wife Shanna Moakler.

The Keeping Up With The Kardashians alum recently shared a sweet mother/daughter moment on TikTok.

The KUWTK star sported a gray hoodie as part of her short dark locks were pulled back.

She stood in front of a mirror while getting glammed up.

Her middle child, Penelope, peeked behind her mother.

The duo danced and pretended to sing the lyrics from the track, Kill Bill, by pop singer SZA.

The pair mimicked the line: “I might kill my ex, not the best idea.”

Unfortunately, fans did not find the music video amusing and speculated the song was a reference to Kim’s former parter.

One critic claimed that the former E! star “knew what she was doing with the lyrics,” while another critic said: “Feels slightly inappropriate to be in this video with Penelope when it’s about her dad!”

After nearly a decade together, the exes ended their long on-and-off relationship in July 2015.