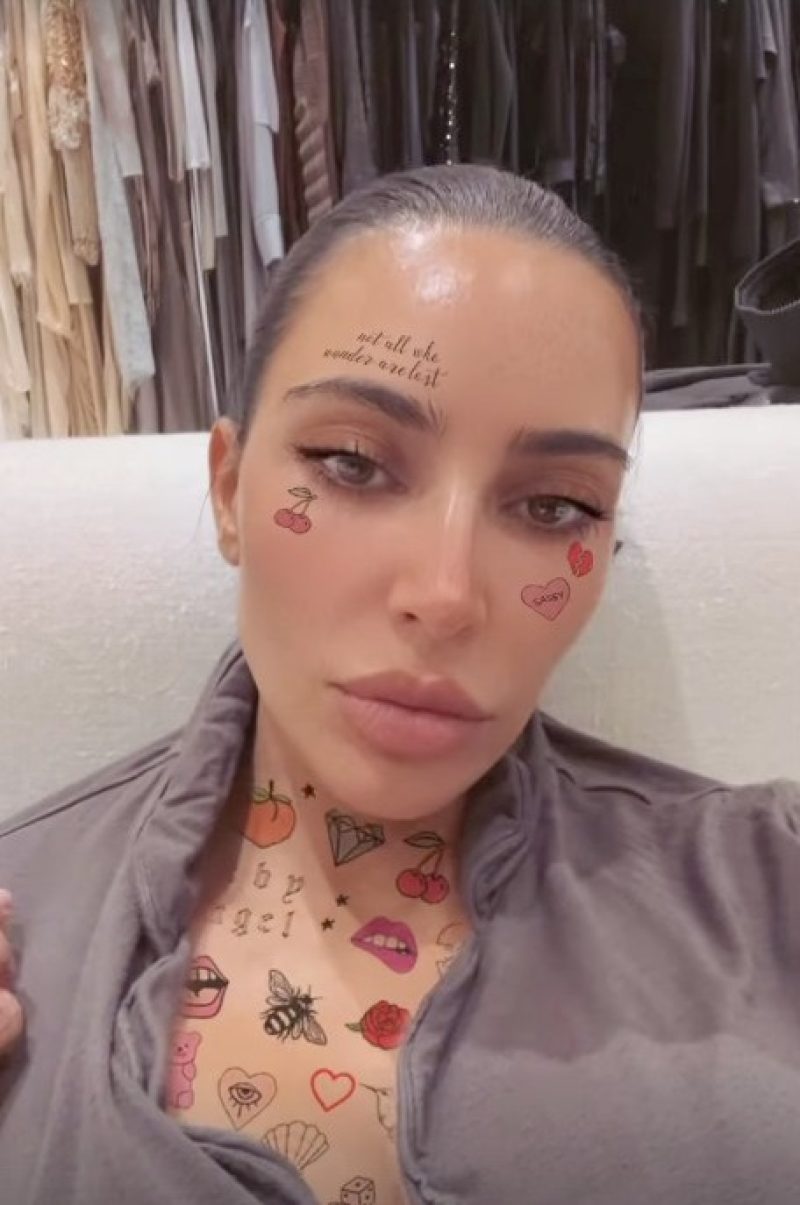 KIM Kardashian has shown off her fake face and neck tattoos in a new video.

The Kardashians star seemed to be playing around with face filters in her silent Instagram Story.

Instagram/Kim KardashianKim had fake designs of cherries, mouths, and hearts all over her skin[/caption]

While sitting on a white lounge chair, Kim, 42, pulled at the collar of her shirt and displayed more fake tatted designs.

Below her shadowy eyes, there were images of a broken heart and a cheery.

Her neck had various patterns of mouths, bees, and diamonds.

With the rack of fancy clothing in the background, she appeared to be inside the walk-in closet of her $60million mansion in Los Angeles.

Meanwhile, her ex-husband Kanye West, 45, has reportedly gotten remarried at a secret ceremony.

Ye is believed to have tied the knot with Yeezy designer Bianca Censori.

Kanye and Bianca, 27, have yet to make their marriage legal as the two have not filed for a marriage certificate, according to TMZ sources.

Briana has been spotted with her long brunette locks chopped and a new short blonde bob.

On January 9th, the pair appeared to be wearing wedding bands while having lunch together in Beverly Hills, as seen in the photos obtained by DailyMail.com.

The architectural designer has been working for the Yeezy brand after joining the fashion company in November 2020.

Kanye paid tribute to Bianca in December 2022 when he released the single Censori Overload, which is a play on her surname.

He claimed in the lyrics that he was celibate before tying the knot.

The Yeezus singer rapped: “And The Bible said, I can’t have any more sex til marriage.”

The tack also included references to his recent divorce from the mother-of-four.

The lyrics opened with: ‘Waking up to ‘I can’t do this anymore’ text’, I know it’s ’cause the headlines / Why she wanna leave.”

The Flashing Lights hitmaker reportedly tied the knot with Bianca about two months after his divorce from Kim Kardashian, 42, was finalized.

Kim and Kanye finally settled their divorce in November 2022.

Before their settlement, sources told The U.S. Sun that Kim was “desperate” to finalize the split.

The Skims founder filed for divorce back in February 2021 after nearly seven years of marriage.

After splitting up with his ex-wife, Kanye had several public romances, including his short-lived flings with actress Julia Fox, model Vinetria, and model Chaney Jones.