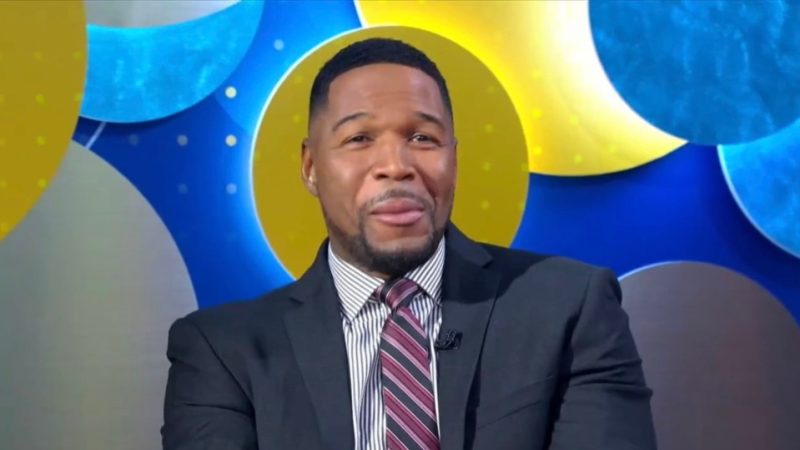 GMA’s Michael Strahan has been called out by co-host Robin Roberts for an awkward act as the show returns from commercial.

On Thursday’s episode of the morning show, Michael went to grab something to snack on during a commercial break.

GMA host Michael Strahan grabbed some food before the show went to commercial breakABCWhen GMA returned, Michael was still chewing, which co-host Robin Roberts called him out for

But he wasn’t finished eating when the show returned, as he was still chewing when the cameras started rolling.

“What were you doing over there, Michael?” Robin asked pointedly when the show returned from commercial break.

Michael grinned wide with a huge mouthful of food, continuing to chew as Robin called him out.

It took a moment for him to swallow as he covered his mouth with his hand.

“Mom always said, don’t eat with your mouth full!” Robin joked as all of the hosts laughed.

“He made a beeline over there!” Robin continued, as Michael finished munching and rested his hands on his knees.

“I didn’t want you to eat alone!” Michael joked to Erin, who apparently also had a bite to eat during the break.

The other hosts had a good laugh before continuing the show, with Michael in good spirits.

The GMA mainstay returned to his post on Thursday morning after taking Wednesday off.

The host was out on Tuesday after receiving backlash for his interview with Prince Harry, 38.

He did make an appearance this past Monday, however, to expand his interview with the Duke of Sussex.

Instead, he took a day off on Tuesday this week.

Host Cecilia Vega was tapped to fill in for him instead.

Michael returned to hosting duties on Wednesday, then appeared on Thursday and Friday once more as well.

Marilee shared a birthday tribute to daughter Sabine, who she shares with TJ, for the girl’s 10th birthday.

Marilee wrote: “And then she’s 10! Happiest birthday to this wonderful human of mine, who pours so much goodness into the world.”

Michael took the time to post a heartfelt birthday message to Sabine.

Michael continued to munch while Robin joked with him, wearing a huge smileABCHe covered his mouth at one point with a huge mouthful of food as his co-hosts laughedABCWhen finished eating, Michael joked that he didn’t want Robin to have to ‘eat alone’ABC