Wednesday ending explained: Who is the monster? 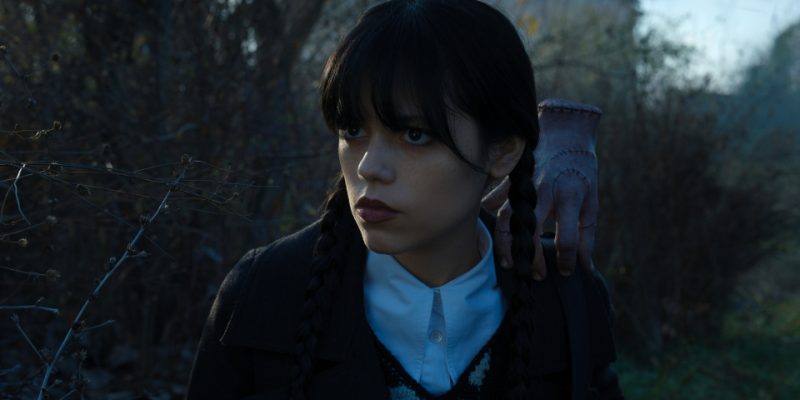 THE Addams family have burst back onto our screens after their sour-faced teen daughter was given her own show.

Millions of viewers have already binged watched the new Netflix series Wednesday – but some were left baffled by the ending.

NETFLIXThe identity of the terrifying monster, the Hyde, that has been terrorising Nevermore is revealed in the final episode[/caption]

What happens at the end of Wednesday?

The eight-part series wraps up with the episode “A Murder of Woes”, which focuses on the identity of the serial killer slaying students.

Wednesday, played by Jenna Ortega, has been meticulously keeping track of the mysterious murders of outcasts and normies.

After weeks of setbacks and dead ends in her attempt to find the truth, it is her romance with Tyler which helps her solve the whodunnit.

The pig-tail-wearing teen had shared her first-ever kiss with her beau – which prompted her to have one of her visions.

She sees the monster, who her Uncle Fester informed her was known as the Hyde, killing Dr Kinbott and then turning back into Tyler.

Wednesday confronts him and bombards him with questions about his secret identity, although Tyler maintains his innocence.

She plans to torture her love interest into telling the truth after Bianca traps him with her siren call – before her new school pals reveal her intentions to Principal Weems.

The Sheriff puts a stop to Wednesday’s plan and hauls her down to the local police station, where she is later released after avoiding kidnapping charges – but she is expelled from Nevermore Academy.

Who is the monster?

Despite his initial protests, Tyler admits all to Wednesday before they leave the police station during a chilling conversation.

He boasts that he is the Hyde and enjoys every moment of killing his victims while almost tasting their delectable fear.

The son of Jericho’s Sheriff says his feelings for Wednesday were never real, but instead a ploy as part of his sick scheme.

He warns Wednesday that she is his next target on his list – seeing the heartbroken teen pack her bags to head home the following day.

Now all that is left of her investigation is working out who is the master controlling the hellish monster terrorizing the town.

A conversation with her friend Eugene regarding his earlier attack sees him recall the assailant wearing red boots – allowing Wednesday to put together the final pieces of the puzzle.

Sweet, innocent teacher Marilyn Thornhill is exposed as the mastermind behind the chaos that has gripped Nevermore.

She is actually Laurel Gates -the daughter of a wealthy family who was killed by Morticia when she attended Nevermore – who has been manipulating Wednesday all along.

After an explosive confrontation, the teacher played by Christina Ricci injects her student with nightshade poison and seemingly kills her.

She then tries to finish the job by whacking Wednesday in the head with a shovel, leaving her unconscious.

Mayhem erupts in Nevermore as schoolkids fight against the supernatural abilities of the monsters – but Wednesday is ready to do battle.

What is Wednesday about?

Wednesday follows the life of the sour-faced teenager and only daughter of the Addams Family.

She enrolls at her parent’s former school in the hopes of mastering her emerging psychic ability – but is confronted by their past.

As the titular character navigates the Nevermore Academy – a school for Outcasts – she becomes immersed in a puzzling murder case.

A mystery monster has been attacking people around Nevermore and the neighboring town of Jericho – and Wednesday believes she can find the culprit.

Her weird and wonderful magical abilities aid her through her amateur investigation and to a list of several potential suspects.

Dark humor, romance and teen struggles dictate the story of the gothic teen in this Addams Family revival.

How can I watch Wednesday?

Fans can watch the show on Netflix.