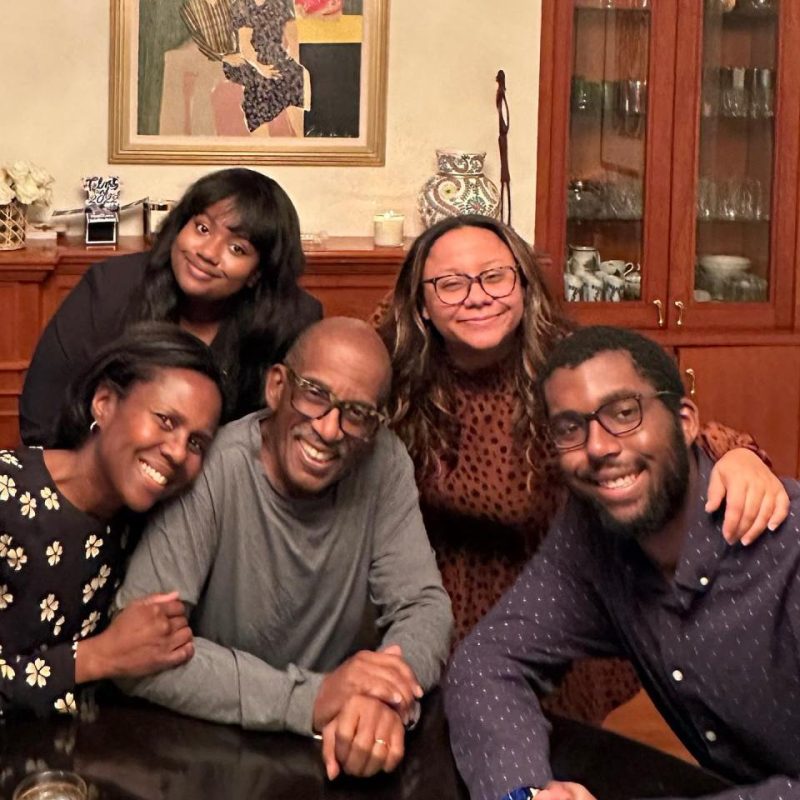 TODAY fans were in tears on Thursday as Al Roker reunited with his wife and children on Thanksgiving.

Al, 68, was admitted to the hospital earlier this month for a blood clot in his leg, which broke into several chunks that reached his lungs, but he’s now back home with his loved ones.

His wife Deborah took to Instagram on Thursday and shared a sweet family photo of her cuddling up to her husband.

The couple were surrounded by their three children Leila, Courtney and Nicholas as they smiled for the camera at home.

Al was wearing a comfy-looking grey long-sleeved top and his trademark spectacles, but appeared frail and tired.

Deborah looked so happy to have her husband home and captioned the photo: “Thursday thankfulness and then some. Holding on tight and cherishing this moment like never before.

Deborah’s followers rushed to comment on the photo and were so happy to see Al back home.

“I am smiling from ear to ear seeing this beautiful photo. Al is BACK!!!” one person wrote.

Another said: “I’ve been thinking about your family and praying for Al. Seeing him leave the hospital, and then seeing everyone together makes me so happy for y’all!”

A third person commented: “This melts my heart. Truly a thankful day,” and a fourth added: “Awe! Such a sweet family pic!!”

Someone else wrote: “So happy to see that Al is doing better,” and a different person said: “This melts my heart. Truly a thankful day.”

Another follower added: “Hoping you are all ok? What happened to Al?” followed by a crying face emoji.

Hours before Deborah’s post, Al shared a heartwarming video of him exiting the hospital to head home for Thanksgiving dinner.

“This is my version of the Thanksgiving Day parade. Getting ready to leave the hospital. Time to blow this taco stand,” Al said in a video on Instagram.

It’s the first time he was forced to miss Macy’s Thanksgiving Day Parade in over 25 years.

The veteran NBC anchor has presented the annual event on the ground since 1995 alongside co-anchors, including Savannah Guthrie and Hoda Kotb.

On Thursday, he shared a snap of himself watching the parade from a TV set in his hospital room and tweeted: “So much to be #thankful for on the #thanksgiving day. Leaving the hospital and home for #thanksgivingdinner.”

While reporting on the day’s festivities, Hoda, 58, and Savannah, 50, gave a shoutout to their colleague live on air.

“For the past 27 parades, at this moment, Savannah, we would turn to Al Roker, who’s our Today Show colleague and our best pal,” Hoda reflected on her co-host.

Savannah chimed in with a sweet message for the Today Show veteran: “We love you, Al. We’ll see you next year.”

PrevPreviousAl Roker’s wife shares unrecognizable photo of him and reveals what’s left her touched amid Today star’s health battle
NextWill there be a season 2 of Wednesday on Netflix?Next