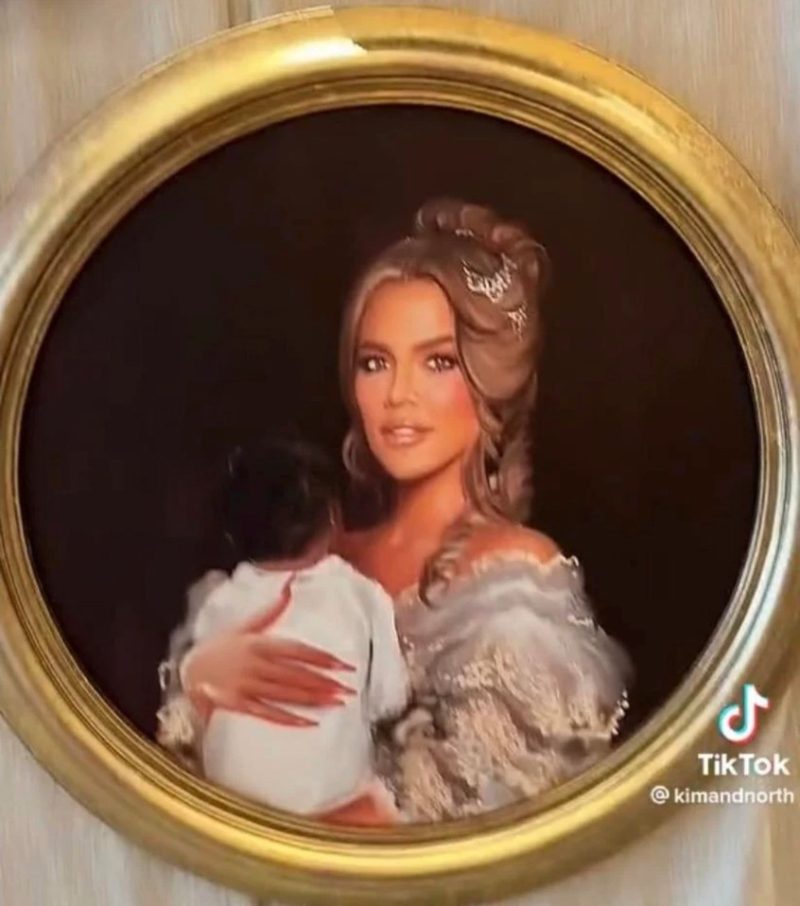 THE Kardashian family have shared a rare photo of Khloé and her baby boy as part of their Thanksgiving celebrations.

As well as filling her home with an array of flowers and candles, the 67-year-old star also had personal portraits created for every guest and hung them on a wall behind the dining table.

Various members of the family showed off the framed pictures on Instagram including Kylie Jenner and Kim Kardashian‘s daughter North West – who filmed it for TikTok.

They captioned it: “better view of some of the portraits,” and included a snap of Khloé‘s portrait.

In the photo, the Good American founder looks regal in a silver off-the-shoulder gown and sporting a traditional Victorian hairstyle.

The reality TV star is sporting her trademark extra long finger nails as she cradles her son, who is dressed in a white babygro.

Khloe’s baby boy, who was born via surrogate in July, has yet to be named publicly and she seems intent on not revealing his face properly just yet.

Fans commented on the portrait on the Reddit thread as one person claimed: “The hiding of Kylie and Khloe’s baby’s faces just shows how everything they do is for clout. They can’t even document their own babies in private… sad really.”

Someone else pondered: “I wonder if the portraits were made so far in advance and that’s why the two new babies don’t have their own? I know Khloe and Kylie aren’t showing pictures of the babies but they could have had portraits made of them and not share it with the public like they have been.”

A third person admitted: “The turned around babies are sending me omg,” and a fourth added: “Honestly these paintings are so f**king weird.”

Khloé shares the boy and her four-year-old daughter True with her ex-boyfriend Tristan Thompson.

However, the pair split up when it was revealed that the basketball player had cheated on Khloé with fitness trainer Maralee Nichols, 31.

Tristan came clean in December 2021, simultaneously when news broke that he fathered a son, Theo, with Maralee.

At the time, Khloe and Tristan had just conceived their son via surrogate, which they had not yet publicly announced.

Fans are now convinced that Khloé could be headed for a holiday reunion with ex Tristan after spotting a major clue.

On Thursday, Khloe‘s sister, Kim Kardashian, shared a series of photos of herself serving a Thanksgiving meal to the inmates of Camp Kilpatrick – a juvenile detention camp located in the Santa Monica Mountains of western Los Angeles County.

Standing right next to her and helping her serve the dinner was Tristan.

Kim even gave Khloe’s cheating ex a special shout out on Instagram.

Fans rushed to a Reddit chatroom to speculate about what, if anything, the Kim and Tristan reunion could mean.