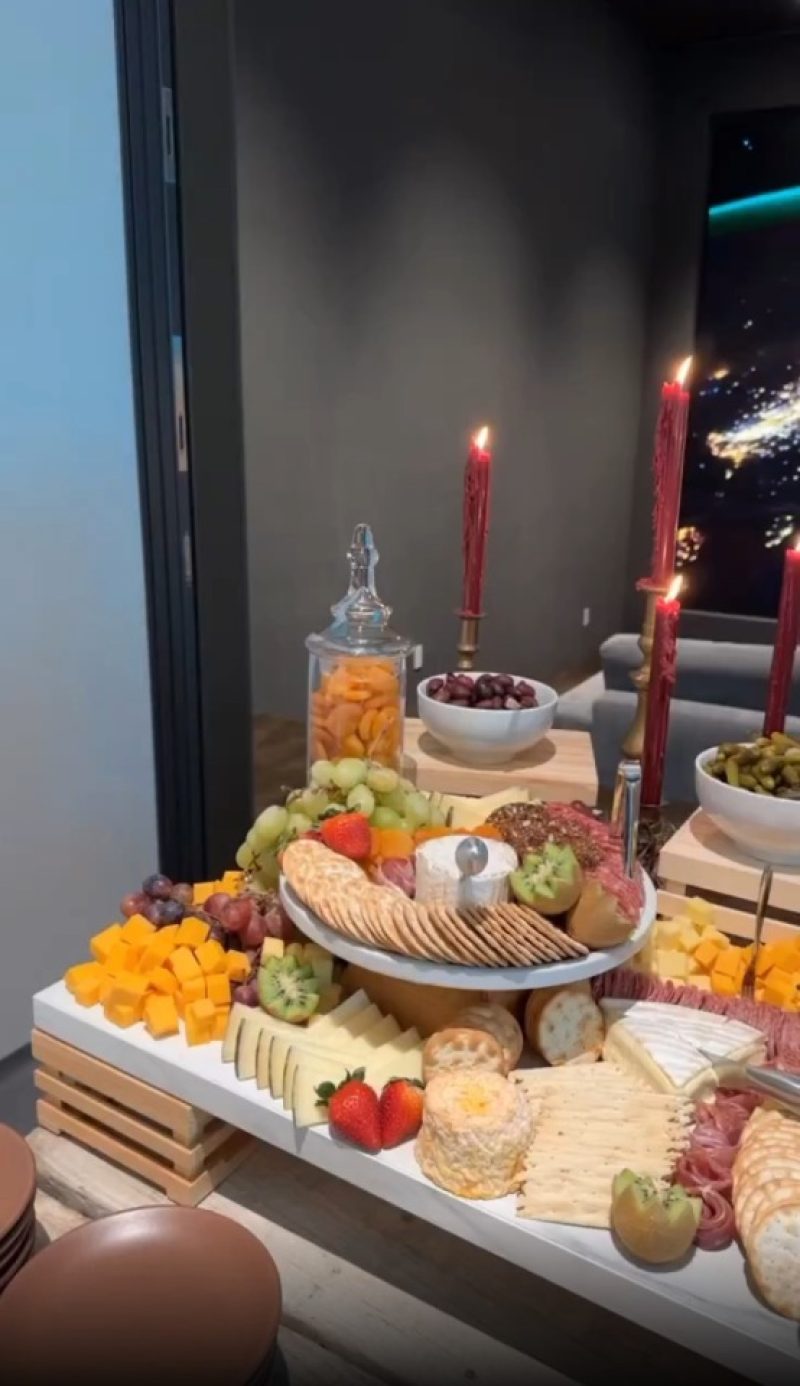 THE KARDASHIANS are showing off their lavish Thanksgiving celebration including plenty of rich desserts and royal paintings of family portraits.

Kim Kardashian, 42, was the first to post about the grand display on her TikTok she shares with her daughter North West, nine.

Kim included shots of candles, portraits, the Kardashian table set up and desserts in the video.

The entire family was included in the Victorian royal-style paintings, including Khloe, 38, holding her new baby boy and Kim dressed in a Marie Antoinette-esque blond updo.

Kris Jenner, 67, also showed off the lavish dinner; however, she included a video of a massive charcuterie and cheese board and gave a close-up look at the dessert table.

The desserts included a donut bar and a slice of a pie-flavor-of-choice with an abundance of toppings.

However, Kardashian critics weren’t charmed by the grand display of wealth.

A fourth lamented: “I wish I was there eating all that food – looks so good. I hope it doesn’t get wasted.”

A fifth and final fan slammed: “They need to get over themselves.”

The Kardashians are known to throw the most over-the-top lavish parties and Thanksgiving is no exception.

The Kardashians went all out to celebrate Thanksgiving in 2021 at Kris’ $12million Palm Springs mansion.

Kourtney Kardashian, her kids Penelope, Mason and Reign were there, as well as her husband Travis Barker and his teenage kids Alabama and Landon.

Also attending was model Kendall Jenner, who posted a video of the incredible cheese and charcuterie spread.

There was also a honey wall – a frame of capped honey – hanging above the impressive table.

The family dined at Kris’ signature long table, which was decorated with festive greenery and featured name cards.

They tucked into turkey, as well as other different types of meat with all the trimmings – including stuffing and roast potatoes.

For desert, there were marshmallows, different flavored pies, cookies and chocolate cake.

The famous family pulled out all the stops for their 2020 Thanksgiving party, which began with the Jenner sisters dancing in matching sweats to RUN DMC’s It’s Tricky in a fun clip.

Kylie and Kendall paraded around their living room as they acted out the song’s lyrics, including “funny drunk,” “sloppy drunk,” “high maintenance” and “low maintenance.”

Meanwhile, Khloe stunned in a skintight pair of Good American jeans while filming her daughter True running around with her cousin Stormi in the living room.

The party included quite the spread for their meal, including Oreo chocolate cakes, several huge charcuterie boards, turkey, stuffing and all the traditional sides.

There was even a S’mores Bar set up, with marshmallows and chocolate bars ready to be toasted next to a mini fire.

One year earlier in 2019, the family documented their Thanksgiving celebration on Instagram.

Khloe said she was thankful for her daughter True, who she shares with ex Tristan Thompson.

Alongside a photo of the mother-daughter duo kissing through a glass door, Khloe wrote: “Everyday I give thanks that I was chosen to be your mommy! I’ll never ever take this role for granted! Thank you Tutu! I will easily love you until the end of time!  #Thanksgiving #Thankful.”

Kris also spread holiday cheer by posting a message that read: “Wishing everyone an amazing Thanksgiving!! Feeling very blessed, and so thankful today! Happy thanksgiving everyone!”

Kim said she was thankful for the four kids she shares with her now ex-husband Kanye West.

Alongside a photo of Kanye holding Psalm, Kim wrote: “So Thankful for my babies.”

Kim followed up the post by sharing a snap of her with all of her children and wrote: “So thankful for all of my babies.”

Earlier in the day, Kanye dropped the music video for his song Closed on Sunday.

The video starred several members of the famous family, including Kim, their kids, Kourtney, her ex Scott Disick, and their three kids.