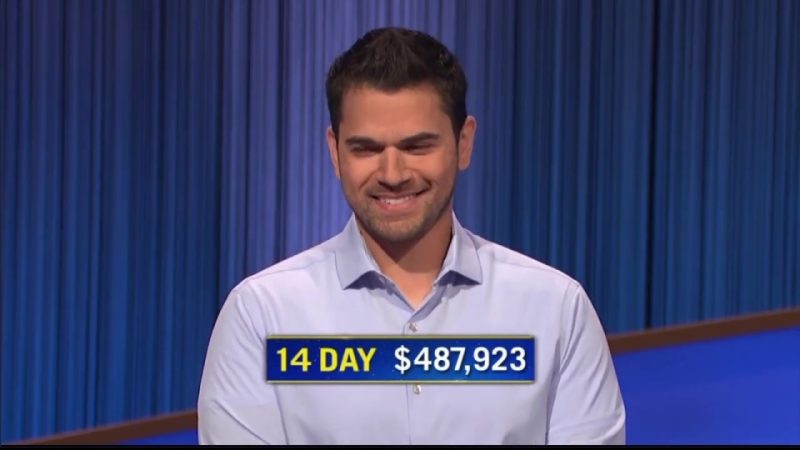 Cris snagged his win on a Final Jeopardy! question on Southern Colleges.

His contestants, Tarun and Megan appeared completely stumped although the stakes were high as they were behind on the game.

Jeopardy! fans ‘confused’ as to whether shows will air on Thanksgiving

Megan had the wrong guess and dropped $2K from her total winnings.

Cris’s previous best single-day winnings were at $69K from a previous episode.

He took a risky bet at $25,221 and was confident the answer was Georgia Tech.

At the start of the episode, Ken gave a nod to Jeopardy! legend Amy Schneider.

Amy has the third-most money ever won on Jeopardy! behind Ken himself with $2.5M and James Holzhauer with $2.46M.

Her impressive 40-day winning streak totaled at $1.4M and Ken himself is wondering if Cris has the potential to rival her winning streak.

At the start of the holiday episode, Ken mentioned a year previously Amy was standing in the exact same position as Cris, drawing a parallel between the two Jeopardy! legends.

Although Cris’ winnings are impressive, his looks are wow-ing Jeopardy! fans even more.

He has a rabbit named Lentils with his girlfriend Heather of 10 years – having sternly corrected Ken that you cannot feed rabbits the beans he’s named after.

A former competitor exclusively told The U.S. Sun that before Cris takes the stage, he is not looking to mingle.

“He was very nice, very polite but he did sit separately from everyone else. He was quiet and it was hard to get a read on him.”

One fan Tweeted after an episode: “Cris is so hot.”

Another fan wrote: “I love Jeopardy! tournaments don’t get me wrong, but I’m very glad sexy Cris is back on my screen.”

A third penned: “Cris is hot, nothing better than looks and brains.”

As a fourth replied: “I agree he is hot looking.”

A fifth tweeted: “He is so adorable” as a sixth wrote: “Heyyyy Cris!!!”

A seventh honed in on his brooding black brows: “Welcome back to my life to Cris and his eyebrows.”

One more admitted: “So smart and if you’re watching you’ll see he does smile and it’s a very nice smile!”

NBCKen was wow-ed by Cris’ extreme Final Jeopardy! wager bringing his win up to $71.8K for the night[/caption]