Jeopardy! host Mayim Bialik claps back at body-shamers in new TikTok about ‘women asking for seconds’ 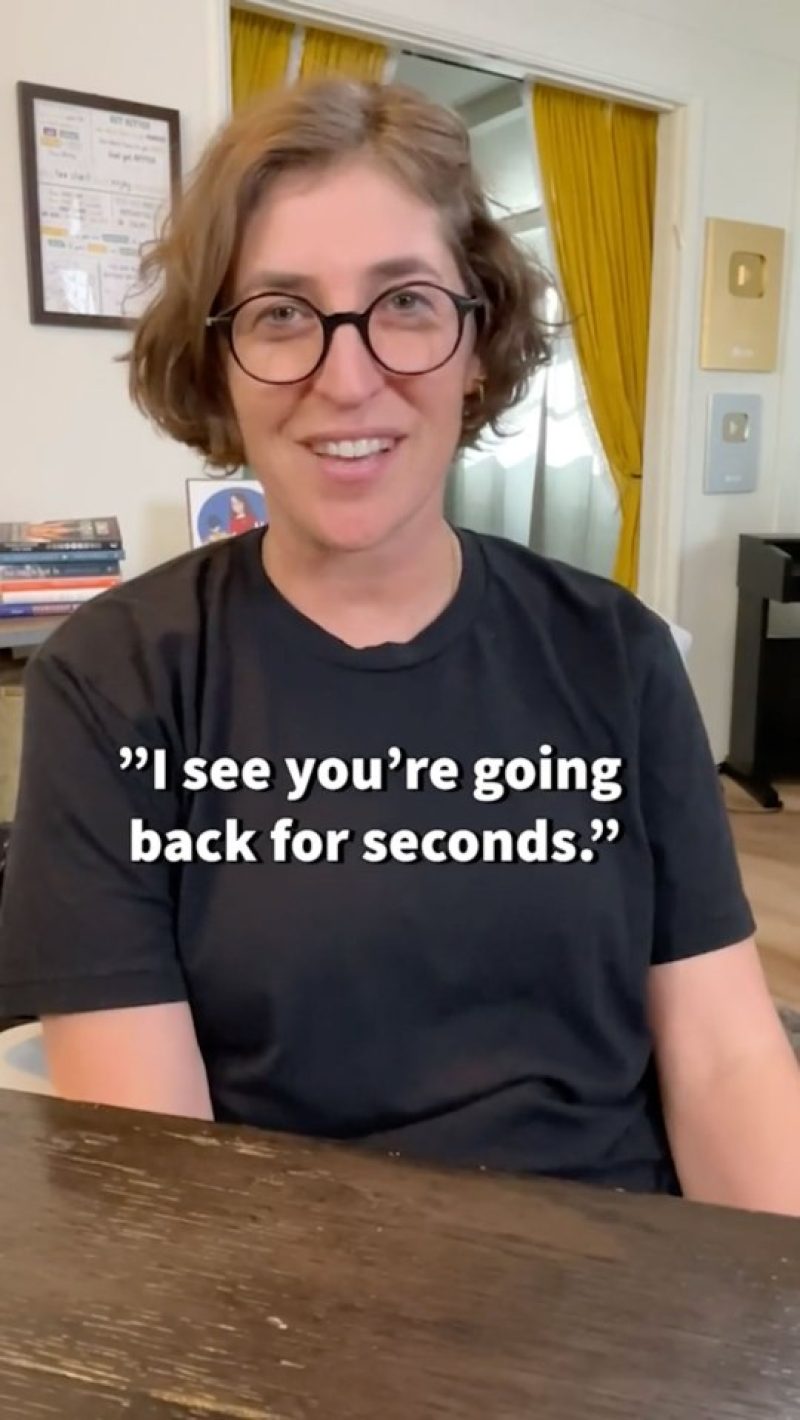 JEOPARDY! host Mayim Bialik has clapped back at body shamers in a new Tiktok video.

She talked about women going back for seconds on Thanksgiving.

On Thursday, Mayim captioned a video of herself sitting at a table with: “I see you’re going back for seconds.”

She wore a black t-shirt and circle-rimmed glasses as she talked into the camera.

The Jeopardy! host said: “Like many women in our culture, I struggle with body dysmorphia and many issues surrounding food.”

“You bringing it up doesn’t make it better and I’m going to enjoy seconds, yes, thank you.”

Body dysmorphia is a mental health condition where someone spends a lot of time worrying about their appearance and the flaws they see in it.

Fans loved her clap back and took to the comments to show their agreement.

“Hell ya! Let’s eat some cake together girl!!!” one wrote.

“Perfect – say it louder,” wrote another.

A third said: “Absolutely. I can’t believe some people.”

“Thank you for this,” many chimed in.

Body dysmorphia can cause people to have anxiety, especially during the holidays.

Mayim recently opened up about her anxiety and and how she calms it.

She took to Instagram earlier this week and shared a video of herself relaxing at home.

Dressed in a black T-shirt and a gray hoody, The Big Bang Theory actress appeared to be makeup free and wore spectacles as she addressed her 4.1 million followers.

The short clip was captioned: “A few things I do to calm my anxiety. There are more. Should I do another part to this?”

In the video, Mayim said: “Meditate at least once a day, eat chocolate, whistle incessantly,” before showing off her skills.

She also shared the video on the Instagram page for her mental health podcast Bialik Breakdown.

Commenting on her whistling, one fan said: “What a clear and crisp whistling!” while another said: “As a parrot, I greatly appreciate your outstanding whistling.”

However, others admitted that whistling isn’t great for others who suffer from anxiety.

“But the whistle produces anxiety in the other people around,” one said.

Another admitted: “Ironically, listening to somebody whistle is the worst thing ever for my anxiety, I can’t bear that noise.”

Someone else joked: “Now I am anxious for chocolate & for you to stop whistling.”

A different person added: “I’m okay with the meditation! But I don’t know if it’s just me but I hate people who whistle, it’s making me feel so angry hahahaha.”

And another follower claimed: “Whistling helps activate your vagus nerve!”

Mayim’s other fans offered up their own suggestions for how they cope with anxiety, and listed dancing, sleeping and listening to positive affirmations.

Earlier this month, Mayim faced some backlash from Jeopardy! fans for giving a “tasteless” and “morbid” clue during the celebrity spinoff.

During the episode, the celebrity Jeopardy! contestants John Michael Higgins, Wil Wheaton, and Joel Kim Booster vyed for a chance to move on.

Among the opening categories was one that featured the letter “A” in all responses.

But one clue proved extra agitating.

It read: “In 2021, fugitive Brian Laundrie ended his days in Fla’s Myakkahatchee Creek area, home to these long & toothy critters.”

The correct response was “What are alligators,” but fans were put off by the mere mention of the suspected murderer.

“Jeopardy! just had the most absurd question I have ever seen in my life,” one viewer tweeted.

Another added: “What the f**k, Jeopardy!. A Brian Laundrie question? Tasteless.”

One person said: “That Jeopardy! question mentioning Brian Laundrie and the answer was alligators?? What the actual h**l, that was so… out of line. Not necessary! There was no reason to mention him at all!”

While this person claimed to be mortified: “Watching Jeopardy! and low and behold they asked a casual question about alligators referencing Brian Laundrie! Oh Mayim. Oh Jeopardy!

“What incredibly poor taste. I’m sure her parents would be thrilled to turn on the tv to see this on a game show!?”

InstagramEarlier this week, the Jeopardy! host opened up about her anxiety and how she calms it[/caption]