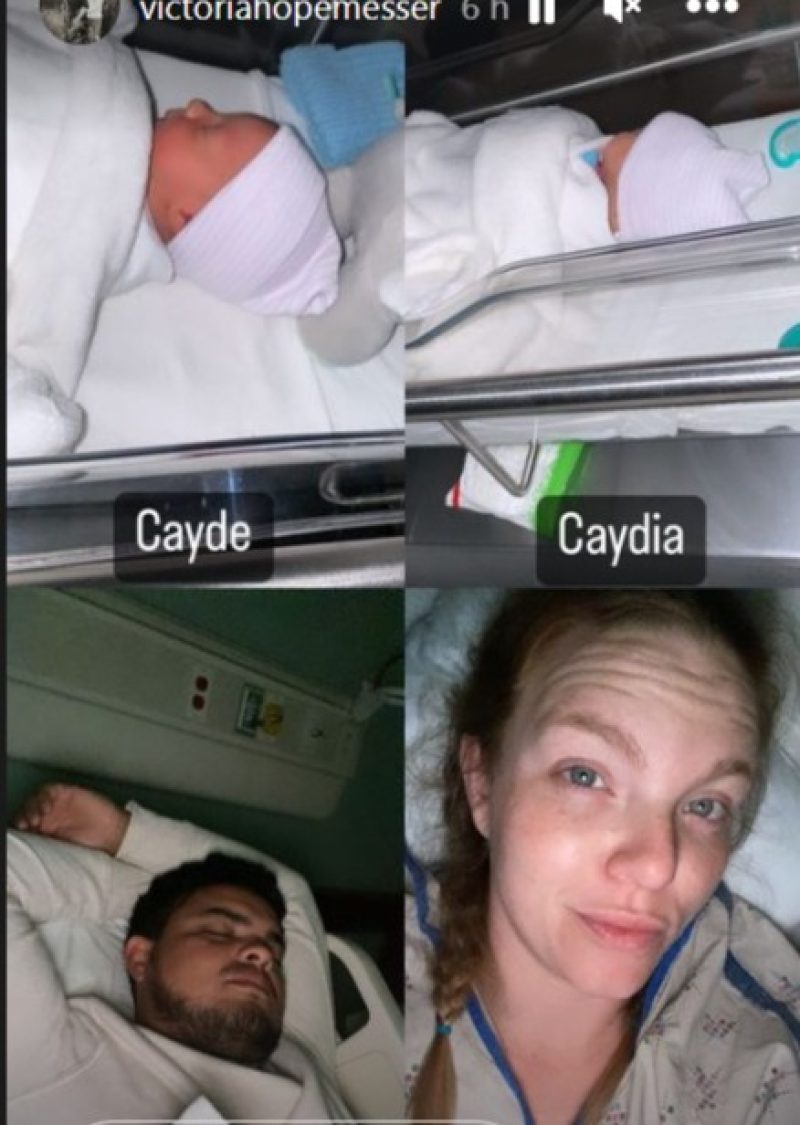 TEEN Mom star Victoria Messer has shared new photos of her in the hospital after giving birth to twins.

The reality star announced on Wednesday that she had welcomed a boy and a girl with her husband, Royer Rodriguez.

InstagramShe also shared photos and videos of the newborns sleeping[/caption]

InstagramVictoria welcomed a boy and a girl earlier this week with her husband, Royer Rodriguez[/caption]

Victoria, 28, took to her Instagram Stories to show off her new additions in a series of photos and videos.

In one sweet snap, Victoria – known to Teen Mom 2 fans as Leah Messer‘s sister – captured the siblings cuddling together while they slept.

They each were swaddled in a blanket, wearing matching striped beanies, showing their already close bond.

In another unedited post, the TV personality included a collage of photos of the babies, mom, and dad, looking exhausted while still at the hospital.

The photos showed the babies sleeping in their individual cots, distinguishing them by their names, Cayde and Caydia.

Meanwhile, dad, Royer, was passed out in a nearby hospital bed, while mom, wide awake, took selfies of herself donning no makeup and a hospital gown.

Victoria gushed over her husband in the following video, where she cuddled with him while he slept as the country hit, Good Ones by Gabby Barrett, played in the background.

Hours earlier, the West Virginia native shared an adorable video of the newborns with her nearly 10,000 followers on Instagram and revealed their names.

“Let the adventures begin,” Victoria wrote in the caption.

The twins are her 4th and 5th children overall and her 2nd and 3rd kids with her husband Royer, whom she married in February this year.

She became pregnant with her and Royer’s two-year-old son Cai shortly after they met on vacation in his native Costa Rica.

Royer later popped the question when Victoria flew to Costa Rica to introduce him to his son.

She showed off her baby bump in a photo with Leah’s 12-year-old twin daughters, Ali and Aleeah.

The now mother-of-five captioned the post: “We can’t wait to meet our second set of first generation TWINS!”

Instagram / Victoria MesserThe newborns are Victoria’s fourth and fifth child, and her third with her husband, Royer[/caption]

PrevPreviousGMA’s Michael Strahan gets ‘scared’ & struggles to catch his breath after big shock on live TV
NextWhat is Vomit Fruit’s real name, what does it taste like and who’s eaten it on I’m A Celeb?Next