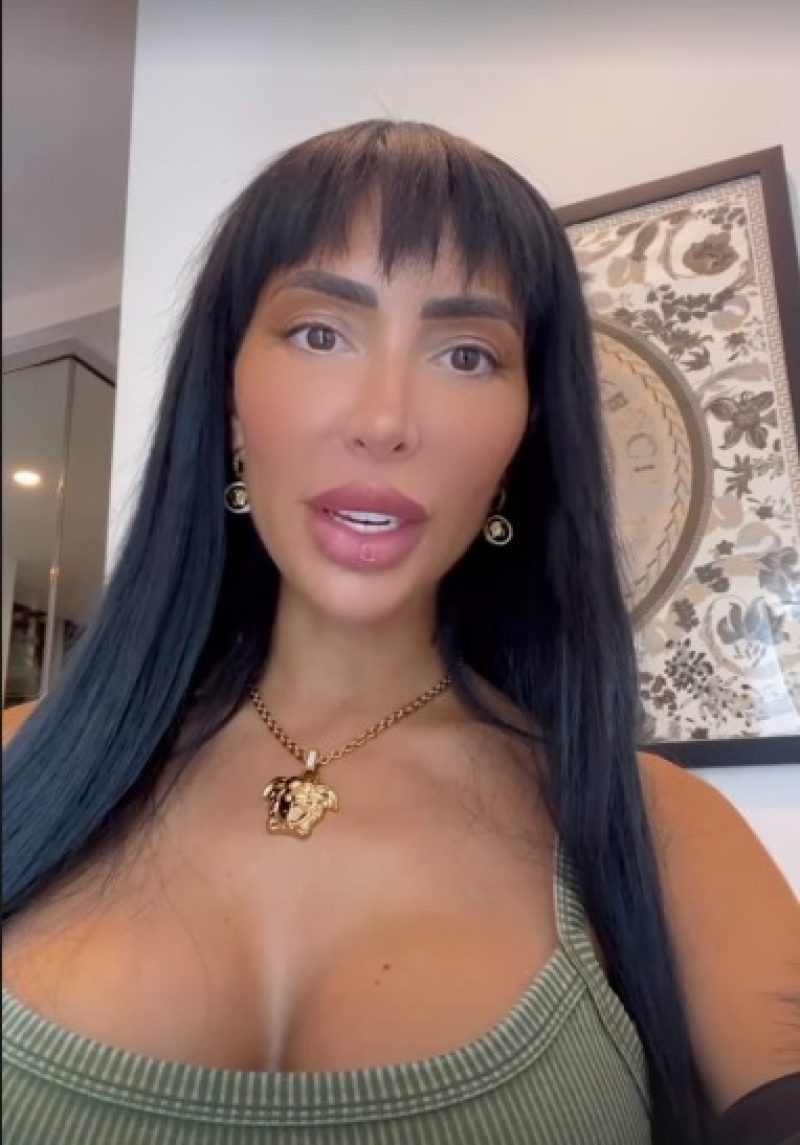 Farrah, 31, took to her Instagram Story on Wednesday evening and shared a video and a mirror selfie.

The reality TV star was sporting an epic tan as she showed off her cleavage in a khaki green tank top, which she paired with leather look pants.

Farrah accessorized with a chunky gold necklace and matching earrings and appeared to have used a filter for the posts.

In the brief video, she told her 2.9 million followers: “Do I even post on my main feed any more? I just don’t know, the subscription is lit. Medusa on everything!”

She was referring to the paid for subscription service that many reality TV stars are now offering their fans on Instagram.

However, people were more concerned with Farrah’s skin tone as opposed to the fact that she is now charging people for content.

Sharing her selfie on Reddit, someone wrote: “I have no words . . .”

Other people quickly commented on the thread as one person said: “This is her worst look yet.”

Another wrote: “I really need her to stop,” while a third asked: “So is she like trying to erase her ethnicity or what?”

Someone else claimed: “So she’s black fishing. Can we just call a spade a spade?”

A different person replied and said: “I’m really surprised I haven’t seen more comments about the blatant new tan or whatever it is.

“Everyone is so focused on her hair that nobody is pointing out her skin is about 40 shades darker too. Obviously she’s not originally as white as Kayla but that doesn’t make it any different in my opinion.”

Someone else agreed and posted: “I was thinking the same thing,” while another added: “That was my thought exactly.”

Another Reddit user suggested: “I think she’s going for that super-self-tanned, black-haired, face-full-of-filler Kardashian look. (To be fair, they are half Armenian and she is I think half Lebanese? So they all have naturally dark-ish coloring for Caucasians. Just not this dark.)”

The comments come after Farrah showed off her new hairstyle earlier this week.

The Teen Mom alum shared a selfie late Tuesday night in which she pouted for the camera and pulled a peace sign.

Farrah displayed her long straight locks with bangs, but her followers were not overly impressed.

Sharing a screenshot of the selfie on Reddit, one person said: “Sorry but those bangs look awful, did she cut them herself?”

Others quickly commented on the thread as one user wrote: “Oh no Farrah,” and another added: “her hair is making zero sense to me.”

Someone else begged: “Dear Farrah, Please stop using your “Farrah filter” . It scares us. Thanks,” and another claimed: “She looks like she’s trying for an anime look now.”

GettyTeen Mom alum Farrah looked rather different back in 2013[/caption]