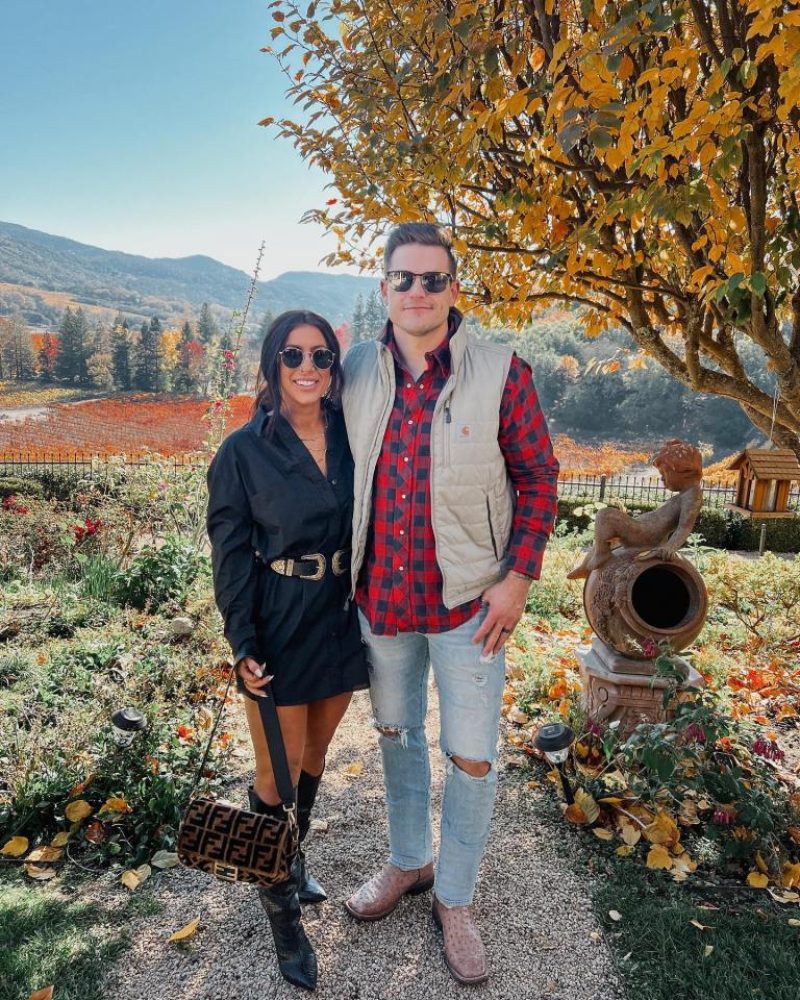 Chelsea, 31, took to the social media platform on Wednesday and posted a snap of her and Coel cuddling up to one another at a farm.

Despite it being late November, the mom-of-four showed off her tanned legs in a short black shirt dress.

Chelsea accessorized her look with a chunky black and silver waist belt, a Fendi handbag and knee-high leather boots.

Grinning from ear-to-ear, the mom-of-four cosied up to Coel who was dressed in light blue ripped denim jeans, a plaid shirt and a stone-colored gilet.

The happy couple both wore sunglasses as they smiled for the camera and prepared for Thanksgiving.

However, not everyone was impressed with Chelsea’s attire and took to the comments to share their thoughts.

“Dude that belt you’re wearing: I wore more than 20yrs ago. Something that deff didn’t need returning!!!” one person wrote.

Another asked: “What is she doing to herself? Not at all pretty,” while a third person joked: “Looking fast I thought that was a statue of Scooby-Doo next to Cole.”

Someone else took umbrage with Chelsea’s nose piercing and commented: “Beautiful pic. That nose ring tho.”

Other followers were much more complimentary as one stated: “Love the fall colors! You all look great!!”

Another said: “I need your whole wardrobe,” while a third wrote: “You are the most beautiful woman ever! You have such incredible fashion sense.”

Someone else added: “Y’all look so amazing, love your outfit,” and a different person noted: “Looking good guys!!!”

However, other people weren’t interested in their outfits at all and begged Chelsea to address the furore surrounding her recent ad post for Duracell batteries.

Earlier this week, the reality TV star caused an uproar when she shared a post which featured her four-year-old son, Watson.

The mother-son duo posed for the shot while sitting in front of the lit-up Christmas tree as Chelsea clutched a packet of lithium
coin batteries.

Despite the Teen Mom 2 alum’s attempt to encourage child safety, fans were not impressed by her message.

The post circulated on a popular Teen Mom forum, where users bashed Chelsea for using her son to advertise the product.

“I’ll take a picture with my kid for a Duracell check. It’s not hurting anyone,” one person commented, apparently sarcastically.

“I thought this was going to be a PSA about button batteries and how dangerous they are, but nah…. She’s shilling for Duracell. How disappointing,” remarked another.

“Everything is an ad with these people,” wrote a third.

Chelsea has yet to address the backlash, so many people decided to remind her about it when she shared her latest pic.

“Are you going to address your previous AD post?” one person asked.

Another fumed: “Not going to address your previous post no???? You and @duracell @duracellofficial should be ashamed of yourselves.”

But other followers defended Chelsea and the advertisement and claimed that she has nothing to explain.

InstagramChelsea with her husband Cole and her four kids: Aubree, Walker, Layne and Watson[/caption]

PrevPreviousKardashian fans in tears over ‘cute’ moment between Travis Barker & his stepdaughter Penelope, 10, in rare TikTok
NextWho is Jonnie Irwin and how long has he been presenting A Place In The Sun?Next