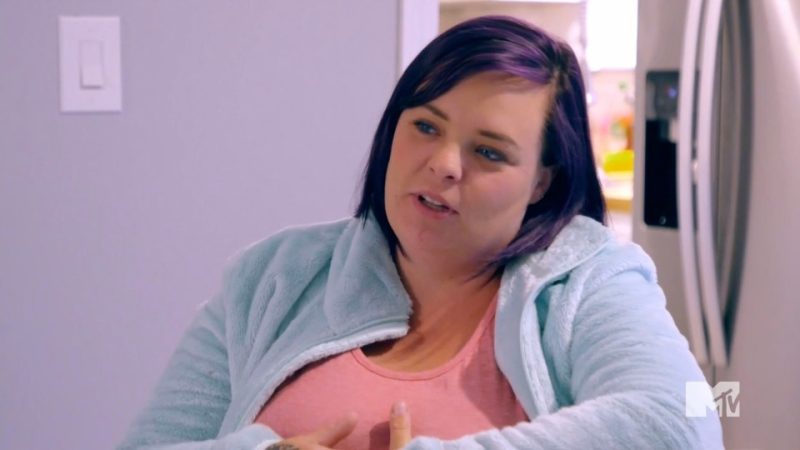 Earlier this week, a clip resurfaced which showed Tyler Baltierra making a tasteless remark about his wife’s weight.

In the brief clip, a woman is seen eating food from a bowl while the song Something in the Orange by Zach Bryan plays.

The words on the post read: “Everybody talks about cutting toxic family off, but no one actually talks about the grief that comes with having to stand firm on that decision knowing it’s not what you want, but what is needed for your wellbeing and everyone around you.”

Catelynn captioned her Instagram post: “It’s hard AF.. the shit is NOT easy and the grief is so damn real.”

It’s unsure who Catelynn was referring to, but it could have something to do with the troubled relationship she has with her mom April.

Catelynn and April’s complicated relationship has been documented over the years on Teen Mom, while fans have watched the 30-year-old forgive her mother multiple times.

The mom-of-four’s fans and followers certainly sympathized with her post and when one person shared it on a Teen Mom Reddit page, others rushed to comment.

“Ooof felt this,” one person wrote, while another said: “I feel this. It’s so much harder than people realize. Props to the people who are able to do it.”

Another commented: “I feel this deeply,” while a fourth person added: “This is a very valid feeling. Especially around the holidays.”

A different Reddit user commented: “I feel this in my soul this year….”

Catelynn’s fans had a lot to say earlier this week when the throwback clip of her and Tyler resurfaced.

In the old video, Tyler and his wife were sharing a meal, when Catelynn brought up the idea of joining Weight Watchers to shed some extra pounds.

“I really like Weight Watchers,” she said while eating a chicken quesadilla. “It makes myself feel good.”

Tyler seemed to be all for it, but he stuck his foot in his mouth with his response.

“It’s your body, you do what you want,” he replied. “Obviously, I don’t want no heifer for a wife.”

The remark even shocked the show’s crew, as one producer called out, “Tyler!” in surprise.

“I’m being honest!” Tyler continued. “Would you want to marry some big heifer?”

“He thinks he’s being funny,” one person criticized.

“He is so loud. Every time he opens his mouth it’s just so aggressive,” another added. “He needs a filter for his words and his volume.”

While a third said: “The irony is that his weight has fluctuated over the years since. And he’s not grown any babies inside his body.

“What’s his excuse for being a heifer?!”