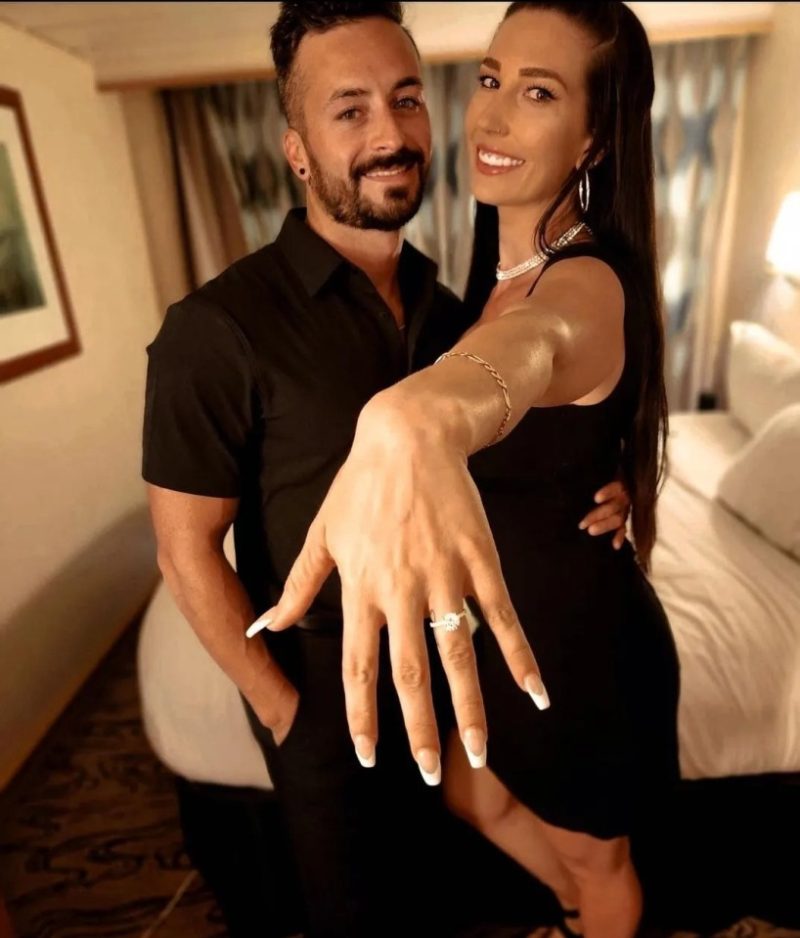 NATHAN Griffith’s ex Ashley Lanhardt has got engaged to her boyfriend Lee Runion.

Teen Mom 2 alum Ashley dated Nathan – who is Jenelle Evans‘ baby daddy – on and off for three years until their split in 2021.

InstagramAshley and Nathan dated from 2017 until 2021[/caption]

Ashley has since moved on salesman Lee and they got engaged on November 17 in Aruba.

She shared emotional pictures from the moment Lee got down on one knee, as well of her sparkling diamond ring.

Ashley wrote on Instagram: “On 11.17. 22 in Aruba, with the most perfect song playing in the background, Lee asked me to spend forever with him.

“Through my tears, I said YES!! My love for this gentle, respectful man runs so deep.

“He has shown me a love that I thought only existed in fairytales. I’m so lucky that I get to spend the rest of my life with him!”

She concluded: “Can’t wait to be Mrs Ashley Lynn Runion.”

Ashley then shared a video of herself flipping through a wedding planning book that her mom got her.

The MTV alum captioned the clip on her Instagram Stories: “It’s finally happening!”

He wrote: “It’s official official, she said yes!! Have never felt more sure about anything in life! You compliment me in all aspects of life!

“I am so excited to bring our family into this world with you as my ride or die. I love u to pieces!!!! 2023 is going to be another massive year for us.”

It’s unclear when Ashley and Lee started dating, but they went Instagram official in November 2021.

Nathan – who is father to Jenelle’s son Kaiser, seven – and Ashley split in March 2021.

He apparently moved back in with his mom after Ashley reportedly called time on their relationship.

“Nathan is not living in Florida anymore and has moved back to Tennessee to live with his mom [Doris],” a source told The Ashley’s Reality Roundup.

“Ashley broke up with him.”

Insiders claimed at the time that “Nathan is seeing another girl already.”

During their relationship, Ashley had grown close with Nathan’s children, son Kaiser and daughter Emery.

In December 2020, she paid tribute to Nathan and his children in a photo with them, writing: “My love for these 3 runs so deep. After my dad passed I lost all desire to start a family of my own.

“Then these 3 special humans walk into my life unexpectedly, but right when I needed them most. You don’t have to be blood to be family, these two tiny humans are my kids.

“I love them both with every ounce of me. We are a family & I absolutely can’t imagine my life without them.”

Meanwhile, in May of this year, Nathan shocked fans by revealing he had secretly married May Oyola.

Not much is known about Nathan’s new bride aside from the fact that she lives in Miami, Florida.

Nathan and Jenelle welcomed their son Kaiser in 2014.

In 2015, Jenelle was arrested for first-degree domestic violence against Nathan, although the personal trainer would drop the charges.

That same year, Nathan was arrested for domestic violence against Jenelle and the two parted ways for good.

InstagramJenelle and Nathan split in 2015 and are parents to son Kaiser, seven[/caption]

MTVAshley appeared on Teen Mom as Nathan’s girlfriend when Jenelle was on the show (seen Chelsea Houska, Jenelle, Kailyn Lowry and Leah Messer)[/caption]