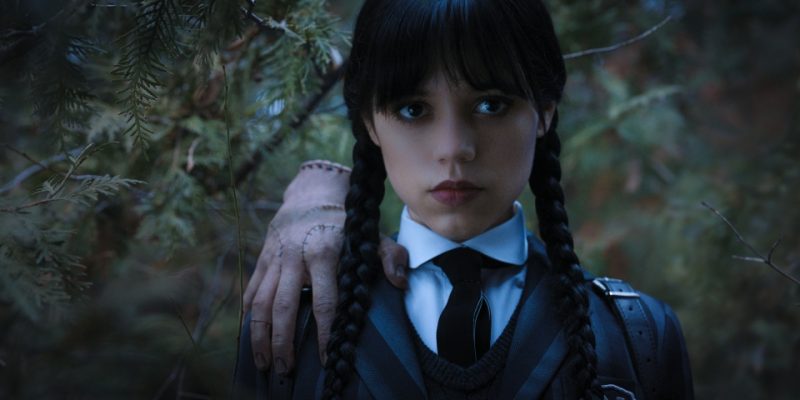 NETFLIX star Jenna Ortega has taken on a spooky new look after bagging her lead role as Wednesday Addams.

But before stepping into the shoes of the sour-faced teenager, the former Disney star sported a much more welcoming appearance.

Fans have said she looks unrecognizable in a series of snaps taken six years before her big break on Tim Burton’s new Netflix show.

The eyes of the world are fixed firmly on the baby-faced actress, 20, after she was cast as the miserable daughter in the new Addams Family series.

Donning Wednesday‘s signature plaits and stony face while armed with her morbid one-liners, it’s hard to believe Jenna once played the role of Harley Diaz in Disney’s Stuck in the Middle.

The 20-year-old first made a name for herself before she had even left elementary school on the children’s channel.

She then took on another girlish role when she portrayed Young Jane in the comedy-drama Jane the Virgin.

The star then lent her skills to Iron Man 3 when she appeared as the Vice President’s daughter in 2013.

The following year, Jenna then earned a gig in the popular web series Know It All Nina, where she capitalised on her teenage charm.

She then starred in the 2015 Netflix sitcom Richie Rich, as the protagonist’s playful pal.

Jenna has also lent her voice to the popular Disney series, Elena of Avalor.

Her adorable looks paired with her explosive personality made her a hit with audiences across the globe.

But as she teetered on the brink of adulthood, the actresses’ career opportunities also began to mature with her.

Jenna co-starred as Pheobe in the horror sequel The Babysitter: Killer Queen, giving audiences a taste of her diversity.

She then played Ellie Alves in the second season of the Netflix thriller series You in 2019, again using her youthful looks to portray a younger character.

The Latina then further dabbled in dark roles after appearing as Tara Carpenter in Scream – a role she will be reprising for Scream 6, which will debut in 2023.

In a stark instance of life imitating art, Jenna is now sporting a more gothic look after earning her spot as Wednesday.

The glam actress even turned up to the show’s premiere delivering a look The Addams Family would be proud of.

She rocked the red carpet in a stunning black Versace dress with a thigh-high split alongside a gothic black veil.

The 20-year-old said it “just felt appropriate” to pay tribute to her character while riding on the coattails of her stardom.

Jenna has seemingly banished her sweet persona to immerse herself in the role, shocking fans with her sophisticated – although spooky – new appearance.

Due to her successful career, Ortega has been able to amass an extensive net worth – and is estimated to have $3million stashed away.

She is set to explore life as Wednesday as she grows up while trying to master her supernatural abilities in the new series, while taking influence from the several actresses who have had the opportunity to play the teen.

https://www.alamy.comJenna has starred in Jane the Virgin, Iron Man 3 and Richie Rich[/caption]