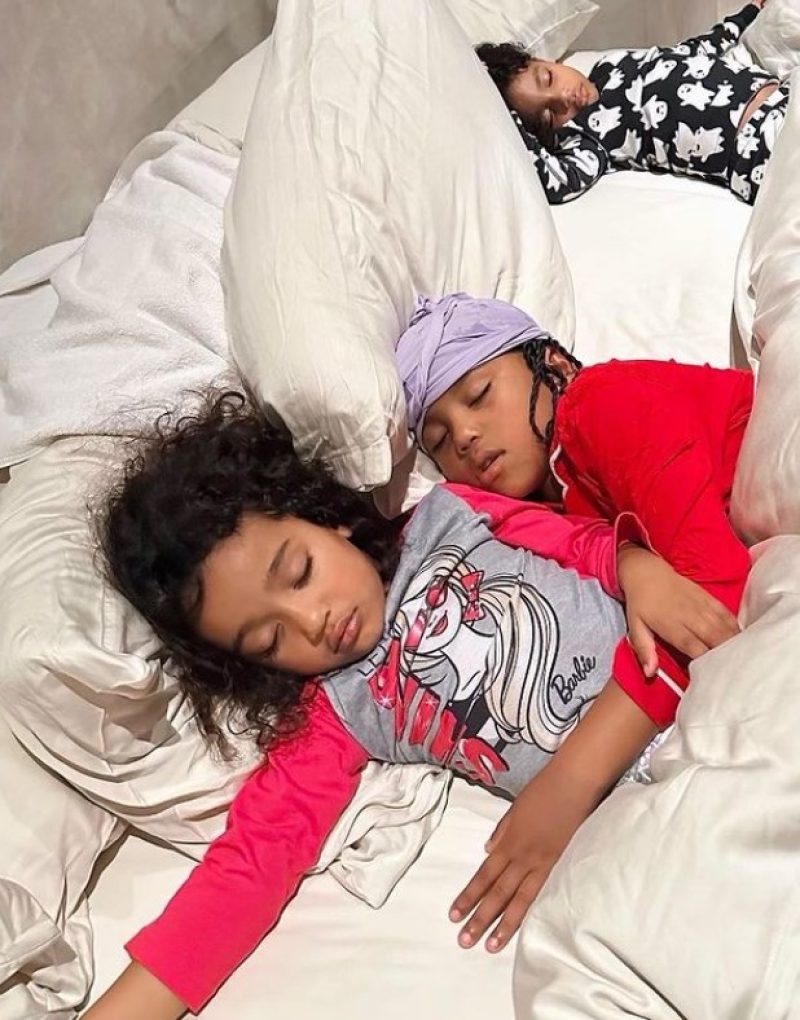 KIM Kardashian posted a photo of her kids Saint, six, Chicago, four, and Psalm, three, all snuggled up and asleep in bed.

However, fans were shocked Kim, 42, would invade her children’s privacy like that by posting a photo of them in her bed to her millions of followers.

In the two photos Kim shared to her Instagram, three out of four kids were snuggling up to each other in bed – although her eldest, North, nine, was missing.

Kim captioned the photos of her kids asleep: “Nothing better than these snuggles.”

While some fans found the photos endearing, others were not as charmed.

A group of Kim’s fans took to an online forum to discuss the post.

ALL HANDS ON DECK

One fan dissed: “I kind of hate this… nothing is private to them, not even sleep. Imagine you wake up and your mom has posted a photo of you sleeping to 300 million people.”

Another agreed and posted: “It’s so sad. Mostly because of the privacy thing but also because you know there will be creeps and a**holes who will comment all sorts of weird things about this.”

Yet a third fan wondered: “Right – did the kids consent to these photos being shared?”

A fourth fan slammed Kim’s comment and mocked: “Nothing is better than these snuggles except posting these snuggles to millions of people for validation.”

Kim shares her four children with her ex-Kanye West, who she’s currently battling in a nasty custody case.

The pair have reportedly not been on speaking terms, but they reunited earlier this month to support Saint at his flag football game.

The reunion came after Kanye was recorded storming out of Saint’s soccer game the week before after an argument with another parent on the sidelines.

As was first reported by TMZ, the rapper and the soccer mom’s disagreement appeared to end at an unhappy stalemate, with Kanye storming away from the combatant and off the field.

Kim, who was also present for the parent-to-parent quarrel, stayed planted in her seat though she did watch from a distance.

A source recently told The U.S. Sun that Kim is “desperate” to finalize her divorce from Kanye, but he has continued to stall the case.

The beauty mogul filed for divorce from Kanye in February 2021 after seven years of marriage.

Despite insisting he wanted to fast-track the divorce, Kanye has caused a number of delays due to his bizarre behavior.

The 45-year-old star took weeks to file his declaration of disclosure and has lost six lawyers so far, as many have struggled to work with him.

Kanye’s most recent attorney, Robert Stephan Cohen, who is based in New York, confirmed to The U.S. Sun he is no longer representing the embattled star.

The Can’t Tell Me Nothing rapper’s LA-based divorce attorney, Nick Salick, is still believed to be working on the divorce.

TMZ has claimed that Salick is eager to work out both a custody and property settlement agreement, although no further papers have been filed.

When asked repeatedly if he is still a client, his office refused to confirm or deny, telling The U.S. Sun: “We cannot comment at this time.”

Salick did submit the star’s financial information on October 17, which included his income, expenses, assets, and debts.

But since Adidas and Gap recently cut ties as many businesses distanced themselves from Kanye, his legal counsel may want to resubmit the filing.

The superstar is also no longer on the Forbes Billionaires’ list and claimed on social media: “I lost 2 billion dollars in one day.”

The German sportswear giant decided to part ways with Kanye after a video of the rap star boasting that the athletic apparel company couldn’t “drop” him circulated on social media.

On October 24, 2022, Adidas decided to end its partnership with Kanye after he posted a series of antisemitic comments.

The Donda rapper’s controversial remarks could work against him regarding his custody battle with Kim.

InstagramThe U.S. Sun previously reported Kim is desperate to finalize her divorce from Kanye, but he has continued to delay the process[/caption]

PrevPreviousWhen were Mariah Carey and Nick Cannon dating and how many children do they have together?
NextInside Adele’s refurb of £42million LA mansion as she gets rid all of Sylvester Stallone’s movie decorNext