Jeopardy! fans are ‘too distracted’ by one detail with Cris Pannullo before he clinches major milestone with 13th win 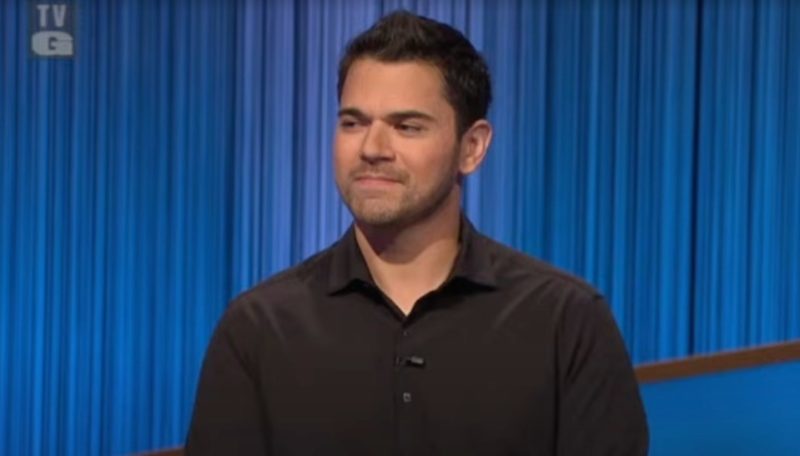 JEOPARDY! super-champion Cris Pannullo won his 13th game and hit a huge milestone on Wednesday, though many fans were too distracted to notice.

Viewers can’t stop swooning over him now that he’s back on TV.

The reigning champ faced John Dorsey, a loan operations specialist from Maryland, and Katy Rudolphy, a civil servant from Texas.

Cris is an operations success manager and former professional poker player from New Jersey who had no trouble after a five-week hiatus due to tournaments.

That staggering amount ties him for the 10th-longest streak and earnings on Jeopardy! ever, but his achievement got upstaged by fans obsessed with the added bonus of his good looks.

Amy Schneider follows up Jeopardy! win with ‘most relatable tweet ever’

Jeopardy!’s Ken Jennings riles up fans with ‘most controversial take ever’

“Cris is so hot” one fan simply tweeted after the show aired.

Another fan wrote: “I love Jeopardy! tournaments don’t get me wrong, but I’m very glad sexy Cris is back on my screen.”

A third penned: “Cris is hot, nothing better than looks and brains.”

As a fourth replied: “I agree he is hot looking.”

A fifth tweeted: “He is so adorable” as a sixth wrote: “Heyyyy Cris!!!”

A seventh honed in on his brooding black brows: “Welcome back to my life to Cris and his eyebrows.”

One more admitted: “So smart and if you’re watching you’ll see he does smile and it’s a very nice smile!”

Jeopardy! announced his return which came one game after Amy Schneider’s Tournament of Champions victory.

They shared an Instagram Gif of Cris warming up by jumping around like Rocky Balboa [seen below] – which may not have helped.

11 out of Cris’ now-13 wins have been runaways, meaning by Final Jeopardy no one could catch him even if they bet the house.

The Thanksgiving clue read: “The Fortune, the 2nd ship to land at this harbor, disappointed those already there, carrying 35 new residents & “not so much as biscuit-cake”

Ken Jennings, 48, exclaimed with a grin: “He’s got a lot to be grateful for tomorrow!” – as the champ clenched his fists in glory.

Finally, some fans appreciated his gameplay as one wrote: “This was a no-contest. 28 correct responses. This was a total no-mercy slaughter.”

Another compared him to another poker ace: “Cris is seriously one of the most captivating players I’ve ever seen. Reminds me of a mini James Holzhauer. I love his calm and cool demeanor.”

Cris – who revealed he’s the oldest of five siblings tonight – typically flashes a thumbs up and prayer hands as his winnings are shown at the top of each game.

He has a rabbit named Lentils with his girlfriend Heather of 10 years, correcting Ken quite sternly earlier that no, you cannot feed rabbits the beans he’s named after.

A former competitor exclusively told The U.S. Sun that before Cris takes the stage, he is not looking to mingle.

“He was very nice, very polite but he did sit separately from everyone else. He was quiet and it was hard to get a read on him.”

Gisele moves into new $11.5m Miami pad opposite Brady and talks to designer

Ken will hop aside from the iconic game show in January so that co-host Mayim Bialik can take the reins.

Over the summer he and actress Mayim – now handling Celebrity Jeopardy! which is off until January – were announced as the permanent co-replacements for the late, great Alex Trebek.

ABCCris Pannullo won his 11th runaway game of 13 total and now has the 10th longest Jeopardy! winning streak ever – but also ‘he’s hot’[/caption]

ABCFans are hilariously struggling to focus on his gameplay as one tweeted about ‘his very nice smile’ and another: ‘Welcome back to my life to Cris and his eyebrows’[/caption]