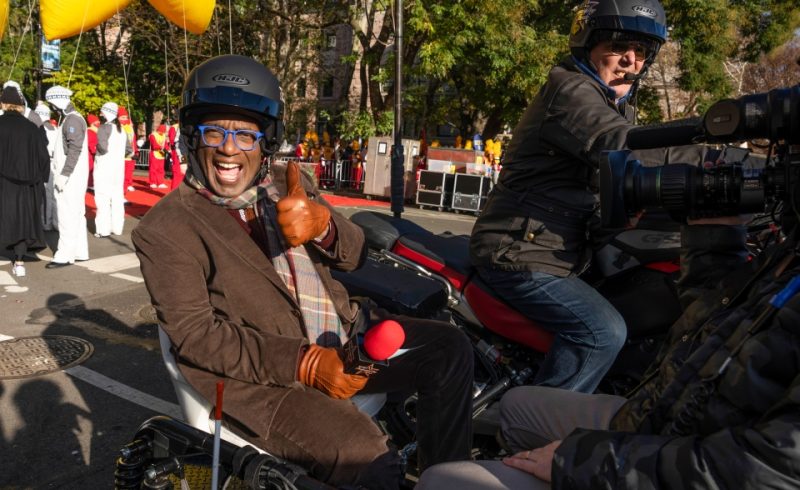 But, this year, the star’s appearance at the New York City parade is in doubt after he was rushed to hospital with blood clots.

Roker’s health has sparked fears among worried fans that he could be forced to watch the Macy’s parade from the sidelines or on TV instead of fronting NBC’s coverage.

It would see his long presenting streak come to an end.

One concerned Twitter user said: “If Al Roker isn’t doing the Macy’s Thanksgiving day parade this year, what is even the point of having Thanksgiving at all.”

While others claimed the holiday would have “no meaning” if Roker missed the event.

Today show bosses have not yet confirmed whether Roker will appear or skip the parade.

His co-star Sheinelle Jones appeared to hint that Dylan Dreyer could fill in for the anchor amid his absence.

A source close to the anchor told the U.S. Sun that he hadn’t “been feeling well”.

Fans and friends sent Roker their good wishes as they called on the host to make a speedy recovery.

Guthrie commented: “You’re the strongest person we know. We miss you and will see you soon!!”

Kotb also wrote: “Al Roker– hurry back to us… counting the days xoxoxo.”

Craig Melvin said: “Love you brother… can’t wait to have you back.”

Jenna Bush Hager penned: “Love you Al! Hurry home. You are missed and loved beyond nature.”

And, Carson Daly said: “We need him back. He inspires me every day because when I wake up I see him on his treadmill.

“He’s walking here to work. I’m like ‘All right, now I got to exercise.”

She said: “You’re an inspiration to us all and definitely one of the most resilient.”

She recently shared some heartwarming snaps of her husband and their kids.

In one selfie, she and Roker were seen beaming in the backyard of their home.

The second image featured a rare photo of the couple and their kids on their daughter’s graduation day.

Roberts captioned the post: “You are the shining sun and star in our family, Al. Love you so much. Can’t wait til you’re feeling like your old self.”

She also shared a snap of the pair sitting in their garden, captioning it: “Love is the best healer.”

Roker said: “Here’s to a speedy recovery to our friend, Jay Leno, who is one of the most genuine and generous folks on the planet. Get well soon, Jay.”

The anchor said he hoped to front the parade’s coverage before enjoying the rest of the day with the family.

This year’s parade is set to feature more than two dozen floats, 16 giant balloons, and a handful of star-studded performances.

Mariah Carey announced on Instagram that she will be opening for Santa Claus at the parade.

She said that her childhood dream is “coming to life”.

A-listers such as Paula Abdul, Jordin Sparks, and Sarah Hyland are also set to make an appearance.

Roker revealed that after the parade, his family tends to eat at one of their favorite restaurants before “passing out” at home.

He said: “I still try and make my mother’s sweet potato Poon each year, which is basically a crustless, sweet potato pie with a marshmallow topping.”

He revealed that the trick isn’t to let the marshmallows catch fire.

He said it was why he was missing from the network’s Hurricane Ian coverage.

Roker reassured fans by saying that his symptoms were not very apparent.

In November 2020, Roker revealed that he had been diagnosed with prostate cancer.

“Good news is we caught it early. Not great news is that it’s a little aggressive, so I’m going to be taking some time off to take care of this.”

He revealed that he underwent an operation and paid tribute to his surgeons.

Roker had his prostrate removed along with some surrounding tissue and lymph nodes during a five-hour procedure.

He has confronted previous health scares including a back operation and a hip replacement.

Fans have questioned the meaning of Thanksgiving if Roker is absentGettyGettyIt’s not known if Roker will appear at this year’s parade. Pictured: a Minion balloon is being inflated ahead of the event.[/caption]