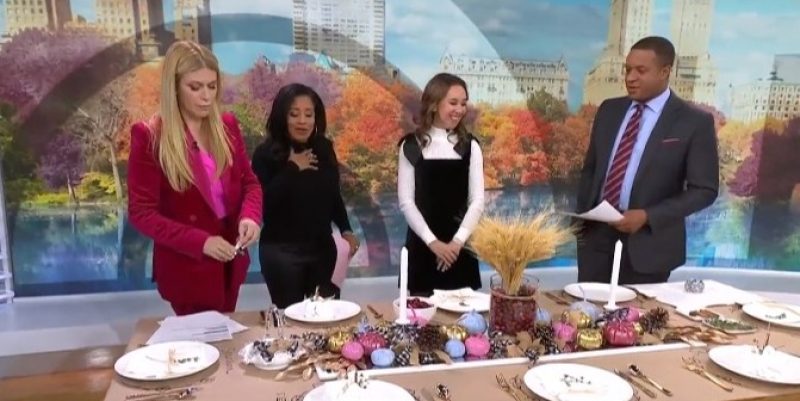 CRAIG Melvin looked like he’d had enough during one segment on the Today show.

The morning show co-host tried to completely walk off the set before he was stopped by his colleagues.

Guest Shannon Doherty (not that one), known for her TikTok channel At Home with Shannon, presented some simple, last-minute ways to make the holiday meal easier.

Among them were suggestions to use craft paper instead of a tablecloth for the kids to color on and for an easy-to-clean option.

Another hack is to use a full-length mirror as a table runner to place food and decorations on.

The host slowly crept backward away from the group, trying to distance himself from the giddy guest.

Eventually, Craig tried to take an opportunity to walk off completely, attempting to flee as he distracted the others by saying under his breath, “That’s a great idea.”

But before he could get too far, guest Shannon stopped him cold, and dragged him back, promising: “We also have quickly, just a few more things.”

Craig uttered a defeated, “Oh,” before rejoining the segment.

The anchor has been having his share of awkward TV moments lately, even clapping back at his co-host, Dylan Dreyer, during a cooking segment.

Craig ended the third hour by saying: “A big thank you to all of our chefs. It was incredible. Their recipes and hacks. It was such a fun morning.”

Then he tried to add in one last sentence before getting cut off: “You can head to TODAY.com…”

Dylan interrupted him by saying: “You have spinach in your teeth!”

Dylan and Sheinelle Jones laughed as Craig came back with a dig at her.

“You’ve got garlic on your breath,” he said.

The women continued to laugh as Craig finished the outro.

Dylan isn’t the only one Craig has thrown shade to on live TV.

Last month, he dissed his co-host Al Roker during a Halloween segment.

Al, Craig, Sheinelle, and Dylan all joined in on the segment.

She talked about safety when it comes to food allergies, and told Al that they have pumpkin baskets that light up to distinguish an allergy.

“Wow,” Al said. “In my day, it was basically a shopping bag or a pillow case.”

Craig then playfully dissed his co-host by saying: “They had Halloween back then?”

Gisele moves into new $11.5m Miami pad opposite Brady and talks to designer

Al said: “They did. They did. I was there when they were actually burning witches at the stake.”

Craig burst out laughing and Dylan and Sheinelle both playfully hit Al on the arm.

ABCCraig and company were hosting a segment on Thanksgiving hacks[/caption]