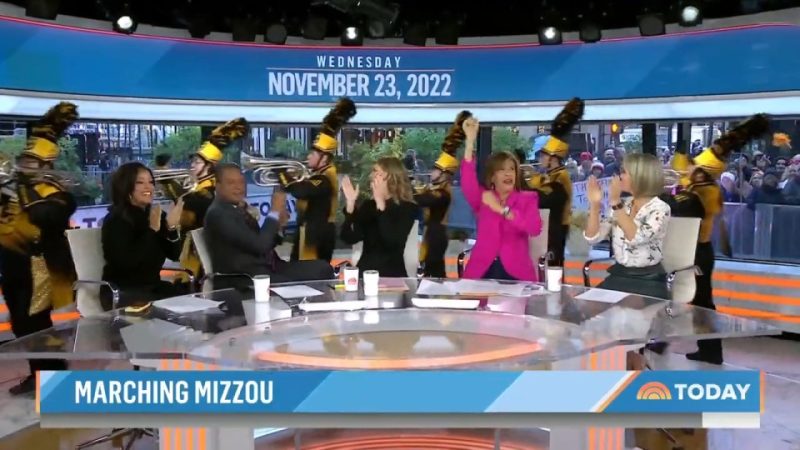 TODAY fans were left cringing as Savannah Guthrie, Hoda Kotb and their co-hosts broke down in an awkward dance on Wednesday.

The show was overtaken by a marching band as viewers were given a preview of the Macy’s Thanksgiving Parade.

TODAY ShowBut some viewers found the segment ‘awkward’ to watch[/caption]

Ahead of the 96th parade, Today took a look at what it takes to bring the epic event to life.

The Marching Mizzou and its cheerleaders then treated viewers to a performance across the plaza.

As the band started playing, the cheerleaders marched through the studio.

They were joined by Sheinelle Jones, Craig Melvin, and Dylan Dreyer, who also got involved in the dance.

The band then marched through the control room and surrounded the boogieing co-hosts in the studio.

Hoda slapped the table in time and shook her fist in the air.

However, some viewers were not impressed to see their favorite co-hosts getting so into it.

“I just want to watch the parade going down the street and the big balloons,” complained one.

Another simply described the dancing as “awkward”.

THANKS HE’S GONNA BE OK

Many Today fans are disappointed that the much-loved weathercaster Al Roker is unlikely to make an appearance on Thanksgiving.

The 68-year-old is battling blood clots in his legs and lungs and has been absent for two weeks.

However, he told his followers on Instagram last week that he is getting better.

“After some medical whack-a-mole, I am so fortunate to be getting terrific medical care and on the way to recovery,” wrote the meteorologist.

DOING IT THE DAY AFTER

Ahead of Thanksgiving, Sheinelle recently told HELLO magazine how she juggles her family celebrations with the show’s coverage of the parade.

Instead of the usual Thursday Thanksgiving dinner that most American families are accustomed to, Sheinelle’s family celebrates the day after.

She explained: “We realized that as long as we’re together, with our traditions and hearts of gratitude, it really doesn’t matter what day it is.”

PrevPreviousWill there be a The Kardashians season 3?
NextJeopardy! host Mayim Bialik reveals how she ‘calms her anxiety’ in new video after facing major fan backlashNext