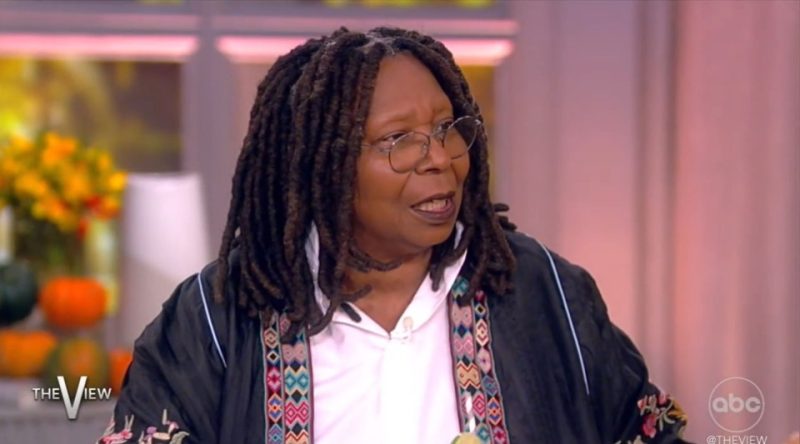 THE VIEW’s Whoopi Goldberg has slammed Joy Behar for her rude behavior during a segment about the Walmart shooting.

Whoopi, 67, couldn’t believe what Joy, 80, was doing as they opened the show on a sensitive note on Wednesday.

Wednesday’s episode of The View saw the women arrive on set to a huge Thanksgiving feast laid out on the table.

Whoopi opened the show by telling the audience that she was looking out for any breaking developments in the Chesapeake Walmart shooting, in which a manager gunned down eight people on Tuesday.

“Please don’t forget those who are not going to be as fortunate and really try to be thankful because tomorrow is never promised,” she said sincerely.

Whoopi then paused as a loud crunching noise could be heard.

Turning to Joy, the Sister Act star had a shocked look on her face as she asked: “What are you eating?”

“We weren’t supposed to start yet Joy,” Sunny Hostin, 54, chimed in, referring to the food on the table.

Joy looked guilty and covered her mouth as she said: “I wasn’t eating the food, it was a Tic Tac.”

The veteran panelist clapped back: “You have super sonic hearing!”

Whoopi gestured to the studio audience and agreed: “They heard it over there!”

Joy’s behavior may surprise some fans after she recently claimed that she hates loud noises.

Earlier this month, she reflected on her lengthy career as part of The View and Alyssa asked her how she had changed over the years.

Ana Navarro then interrupted to say: “I’m not sure you’re grouchier, you were pretty grouchy to start with.”

But the OG co-host snapped back: “Shut up.”

Joy continued: “I’ve always been a little grouchy, that’s my personality. I believe that negativity is funny, frankly. Positivity is not funny.”

The View will be taking a day off tomorrow for Thanksgiving.

However, programing will return as normal on Black Friday at 11a.m. on ABC.

The View celebrated Thanksgiving a day earlyABCWhoopi and co. will be back on Black FridayABC