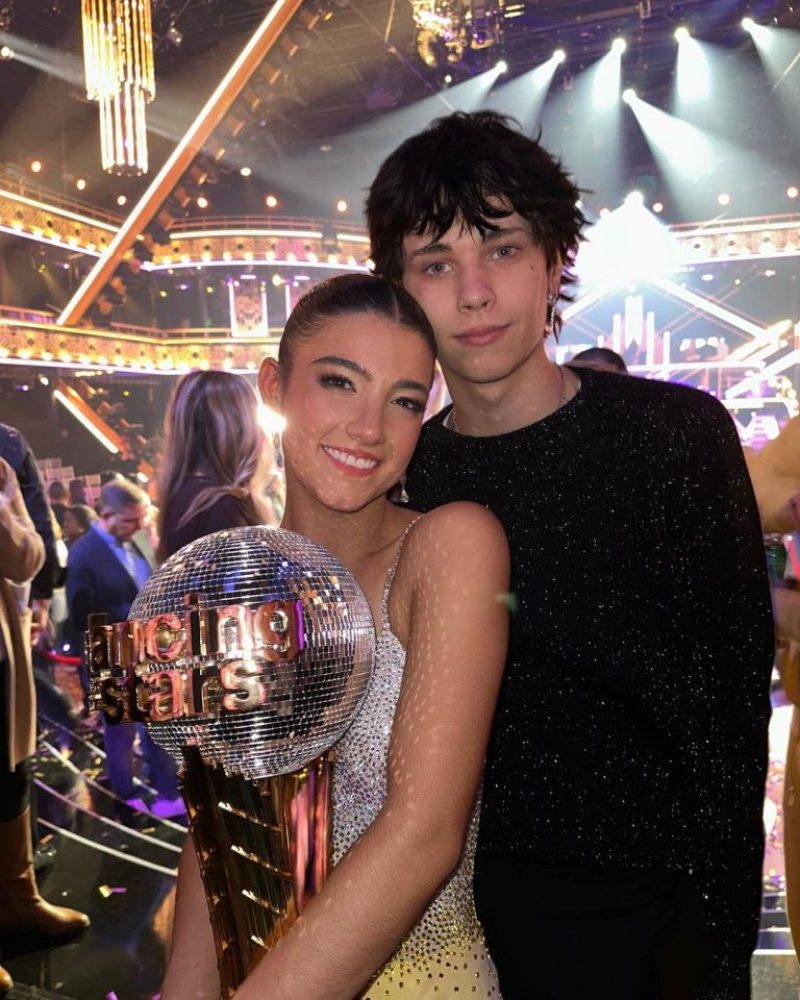 KOURTNEY Kardashian’s stepson Landon Barker has posted a rare snap with his girlfriend Charli D’Amelio after her DWTS win.

Travis Barker’s son often sat in the audience throughout the season, rooting the TikTok star on.

Disney+The TikTok star won DWTS, often with her boyfriend and his family in the audience[/caption]

The young star shared two photos of him and his girlfriend posing with her mirrorball trophy.

Landon also shared a blurry photo of the two, which seemed to capture them smiling at one another.

Kourtney, 43, commented a heart and star emojis on the post.

Other fans shared sweet words for Charli and them as a couple, with one writing: “So freaking sick.”

Someone else wrote: “BEST DANCER IN THE WORLD.”

A third fan wrote: “This is adorable. My favorite teen couple.”

Landon was a regular fixture in the DWTS audience during Charli’s long tenure on the show.

He made an appearance back in October that got the attention of host Tyra Banks.

Unfortunately, she seemed to struggle to remember Landon’s name and repeatedly called him Logan, apologizing only to make the blunder again.

After TikTok star Charli had performed, Tyra said: “I called your boyfriend Landon Barker and his name is Logan.”

Tyra went on, “I am so…” before stopping as Charli and her pro partner Mark Ballas motioned that she had got the names reversed.

She yelped: “Okay, I just said it backwards again. What is wrong with me with this? Why can’t I get this right?

“They said it in my ear last week, I got it wrong. Now that I’m reading it and I’m getting it wrong.”

The camera panned to Landon sitting in the audience and laughing at being called “Logan” again.

Tyra said to him: “Hello, Landon, I am so sorry. Your woman did so well tonight.

“That is what live TV is, it is lots of mistakes. We keep it real because it’s live. I apologize again.”

“All good,” Charli told her.

It wasn’t just Landon who was cheering Landon on.

Back in October, Kourtney, 43, and Travis, 46, were spotted in the live audience to offer their support for Charli.

During that episode, Tyra also referred to Landon as Logan.

“I know you guys are very proud right now.”

Fans on social media were quick to pick up on the naming mistake.

A third wrote: “His name is Landon, Tyra.”

For her DWTS appearance, Kourtney showed off a sleek bob hairstyle with a neat middle parting.

She wore a long-sleeve red dress with embroidered detailing on the front.

Travis rocked a plain white T-Shirt with a huge chain around his neck and a camo jacket slung over his shoulders.

He put his arm around Kourtney as the camera panned to the show the pair, who are known for their frequent PDA.

Landon, who has his own fashion line with BoohooMan, rocked a black T-Shirt and layered necklaces.