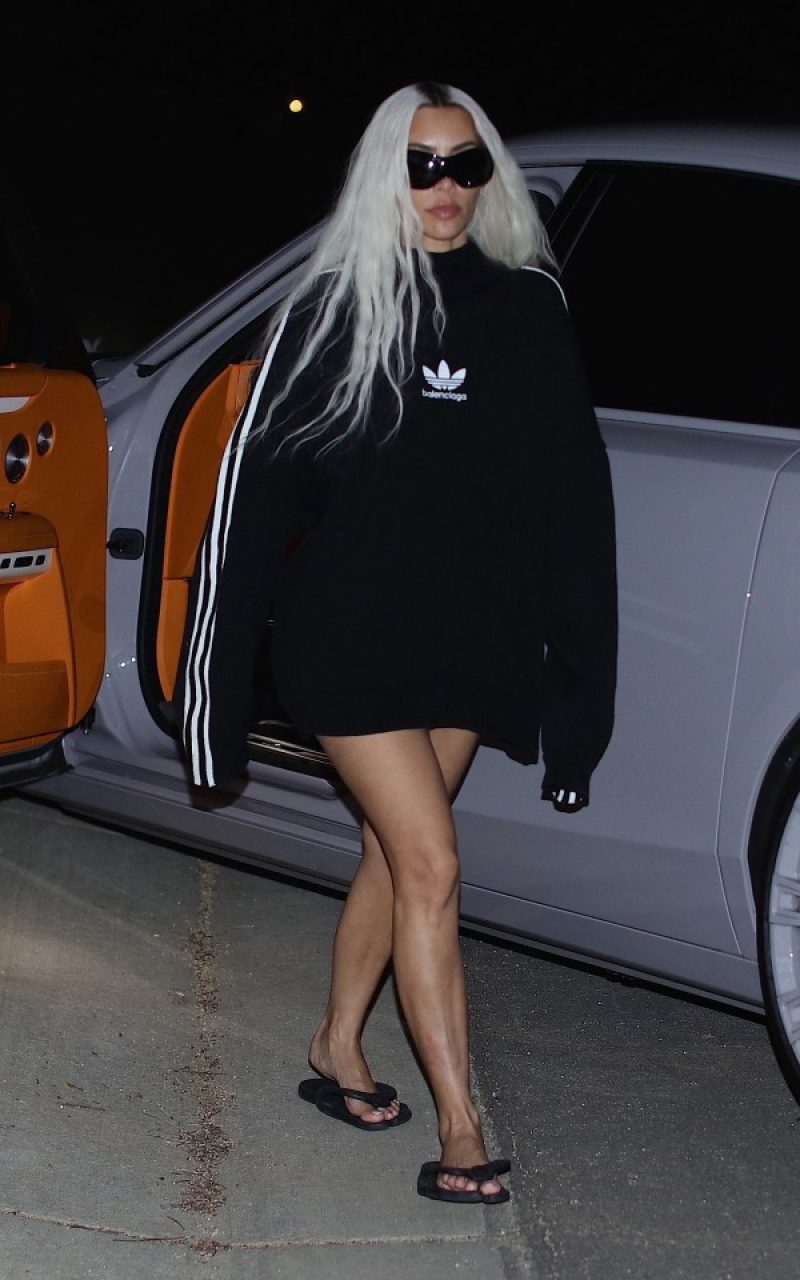 KIM Kardashian has been slammed by critics for her seemingly cheap fashion choices in new photos.

The snaps were shared on a popular Kardashian forum showing the beauty mogul getting into her Rolls Royce after a photo shoot.

Kim, 42, looked exhausted from her long day at work, dressed casually in no pants, a baggy Balenciaga hoodie, and flip-flops.

She covered her eyes with black sunglasses, leaving her long platinum locks flowing down.

The Hulu personality’s de-glammed look ignited a slew of comments from fans who thought Kim’s usual keen sense of style missed the mark.

They particularly took aim at Kim’s choice of footwear and hairstyle, calling her out for their supposedly “cheap” appearance.

“They are f***ing Balenciaga flip-flops designed to resemble the cheap foam ones they give out for free after you get a pedicure. Except they cost like $500. Repulsive lol.” one person commented.

“How does someone so rich look so cheap? Lol I truly don’t get it,” another remarked.

A third user targeted the Skims founder’s blonde extensions that she’s been rocking since channeling Marilyn Monroe at the Met Gala in May.

“I really don’t understand it either. I have legit bought better wigs from Amazon for Halloween. She must think it looks good or is some type of aesthetic, but it’s just giving cheap and dusty.”

On a recent episode of The Kardashians, viewers got a glimpse at the lengthy process Kim endured to turn her naturally dark roots blonde.

She even showed off her natural hair length without the super-long wig she’s been sporting for months.

While getting ready for the annual fashion event, the mother-of-four revealed the baby hairs around her forehead and ears and silky hair texture.

Her newly-dyed locks were then pinned back into a sleek topknot as she emulated the late singer’s iconic look.

In an online thread, one person questioned why Kim generally hides her natural hair length.

They wrote: “Kim’s natural hair length-why don’t we ever see it?”

Another posted: “It’s clear she has thin hair. Her part is pretty wide, even when it was dark. She colors it in at times.”

A third disagreed: “It doesn’t look sparse or too fried here to me. Nothing a trim couldn’t fix.”

Kim’s style was questioned earlier this week after she shared a photo of herself sporting pieces from the Adidas x Balenciaga collaboration.

The model was seemingly shading her ex-husband Kanye West, 45, who both brands dropped.

The plan backfired, however, and the SKKN mogul herself came under fire for supporting Balenciaga following their controversial new ads.

Fans ripped the high-fashion brand over a series of ads featuring kids, one of which also showed what appeared to be documents about a child pornography case in the Supreme C

According to a Fox News report, photographer Gabriele Galimberti said the pics were part of a series called “Toy Stories.”

Angry comments erupted online as one critic wrote: “Kim publicly said she would eat s**t to stay young. There is literally nothing she wouldn’t do for fame and money! The sad part is she has much more money than she could spend in a lifetime.

“She probably lives off her money making her money, and she’d still sell her soul for 1 dollar. I’d never expect her to put children in front of that!”

A second person replied: “She’s just so ignorant and vapid.”

And else added: “This whole thing is really gross. Hopefully, she’ll get called out for sexualizing her own daughters for clicks, too. They deserve so much better.”

Kim is a mom to daughters, North, nine, and Chicago, four, with Kanye.

The former couple – who are currently going through a nasty custody battle – are also parents to sons Saint, six, and Pslam, three.

AlamyShe was recently slammed after posting a photo of her wearing Balenciaga and Adidas, seemingly to throw shade at her ex-Kanye West[/caption]