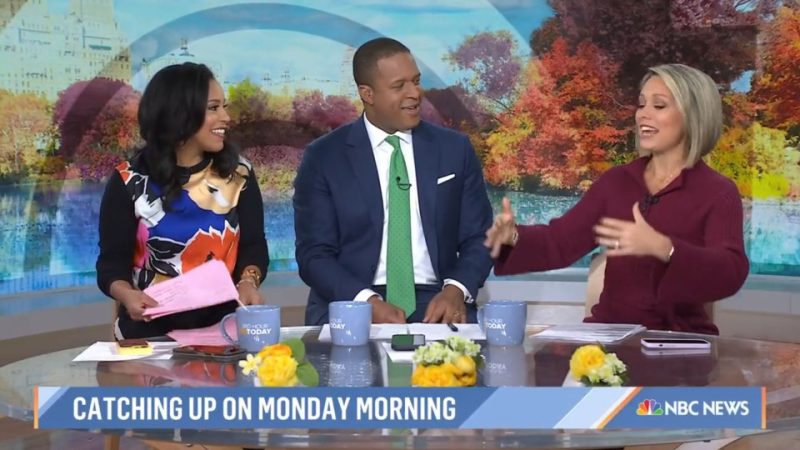 TODAY host Sheinelle Jones has hinted that Dylan Dreyer will replace Al Roker on the show for Thanksgiving.

Al, 68, is currently absent from the NBC programme after he was rushed to hospital due to a blood clot in his leg and some blood clots in his lungs.

During Monday’s edition of TODAY, Sheinelle and her co-host Craig Melvin were joined by Dylan in the studio.

As the trio chatted away, Craig turned to Dylan and said: “How about you? How was your weekend?”

Dylan replied: “It was good. I’m in ‘prepare Thanksgiving dinner mode’ so I’ve got the lists, the boys… we were trying to play and I’m like, ‘guys I’ve gotta make a list, you’ve gotta play this game’.”

An image of Dylan’s handwritten lists then flashed up on the screen as Sheinelle said: “Wow!”

Sheinelle then butted in and revealed: “And somewhere in there you’re doing a parade, like that’s what’s crazy!”

“I know! Working and everything else, but erm it’s all under control and now I feel… and I also, I didn’t take a picture of it, but I also have all of my dishes labeled, what goes in which dish so everything is… I’m ready!” Dylan added.

“That’s so Dylan Dryer!” Sheinelle said as Craig told her: “Good for you!”

Dylan admitted she was feeling “excited” about the holiday celebrations, but perhaps she was also referring to Today’s coverage of the Thanksgiving Day Parade in New York City.

TODAY viewers got a glimpse of what to expect when Craig, Dylan, and Sheinelle, along with Hoda Kotb and Savannah Guthrie, headed outside to speak to the executive producer of the parade, Will Coss.

“This year we’ve got a really exciting parade, we’re back on the streets of New York City, 28 floats, tons of performances, the fantastic marching bands from around the country, dance groups and we’ve got a couple of special performances,” Will explained.

“That’s pretty awesome!” Hoda said excitedly, as Will revealed the production has been in the making for the past 12 to 18 months.

“Of course, we’re gonna be there as well,” Savannah then said as Hoda nodded in agreement.

However, one person who won’t be present this year is their co-host and good friend Al.

Father-of-three Al usually hosts the TV show’s coverage of the memorable Macy’s Thanksgiving Day Parade on the Plaza, but understandably he will be sitting out of 2022’s festivities.

Al was rushed to the hospital for blood clots after being absent from the Today show for nearly two weeks.

He revealed last week that he was treated for blood clots in his leg and lungs.

Al shared a photo of a flower bouquet and a coffee mug, captioned: “So many of you have been thoughtfully asking where I’ve been.

NBCSheinelle Jones, Dylan Dreyer, Craig Melvin, Savannah Guthrie and Hoda Kotb got a glimpse of the parade during Monday’s show[/caption]