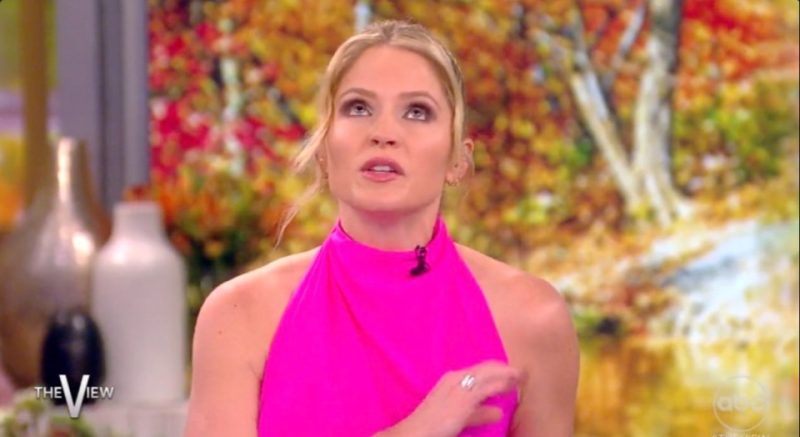 FANS of The View have claimed that Sara Haines made a dig at a former host of the show during Monday’s broadcast.

Speaking to her co-hosts on The View, she said: “Crazy stuff has been happening since I last saw you all, I mean it’s breaking my heart that we are starting once again with this kind of topic.

“GLAAD and other activists are pointing fingers at the rise in anti-LGBTQ+ rhetoric and the political policies,” Whoopi continued.

“This is what rhetoric brings, words matter. This is no put down on prayer but what is going on here? This is crazy.”

Whoopi’s co-hosts Sara, Sunny Hostin and Alyssa Farah Griffin agreed with her and also had their say.

“But I think it does go well beyond DC and politicians, I think we’re living in time when people have taken a self-righteous flag in the way they live and they have banged it over people’s head.

“As someone who was raised in the church, it breaks my heart that people weaponise religion in the way that they’re doing, because self-righteousness – which might seem kind of evasive when you look at it – is the division of people.”

Fans tuning in at home claimed that Sara was making a subtle dig at former co-host Candace Cameron Bure.

Taking to Twitter, one person wrote: “i love that shade sara threw a former cohost candace. she didnt mention her by name but we knew who she was talking about lol.”

Another tweeted: “Say it louder,Sara #TheView,” while a third added: “TheView once again Sara is PREACHING.”

Sara’s alleged dig came just days after Candace said that she doesn’t expect her new network, the Great American Family, to include LGBT storylines in its Christmas movies.

In a recent article in the Wall Street Journal, the 46-year-old explained that part of her decision to switch from making movies at the Hallmark Channel, where she had been for the past decade, for the new Great American Family network was based on their values.

In a post, she said: “It breaks my heart that anyone would ever think I intentionally would want to offend and hurt anyone.

“It saddens me that the media is often seeking to divide us, even around a subject as comforting and merry as Christmas movies,” she continued.

“But, given the toxic climate in our culture right now, I shouldn’t be surprised. We need Christmas more than ever.”

Last week, the former Full House star was scheduled to be a guest on TV show The Talk, but it seems she may have dropped out after her recent controversial comments.

Candace was expected to join the show to promote a new animated holiday special she is in.

Her name was on advance media previewing the episode, but when it aired, she was nowhere to be found. The show didn’t even mention her name.