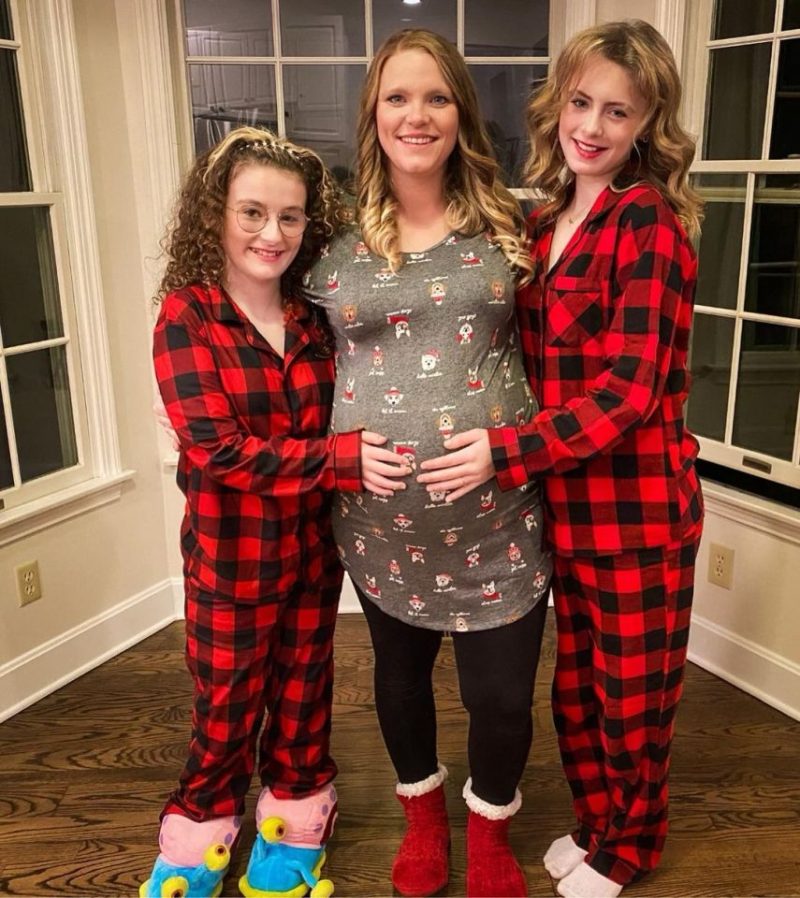 TEEN Mom Leah Messer’s sister Victoria has shown off her big baby bump, revealing her twins’ due date in a new photo.

Fans were caught off guard when Victoria, 28, revealed she expecting twin girls with a Father’s Day post to her husband on Instagram.

INSTAGRAM/victoriahopemesserTeen Mom Leah Messer’s sister Victoria showed off her baby bump with Leah’s daughters and her nieces, Aleeah and Aliannah[/caption]

Leah‘s younger sister gave her Instagram followers a pregnancy update when she posted a photo of herself and her twin nieces on Monday.

Victoria’s baby bump was on full display as she stood between Aleeah and Aliannah, both 12, who each placed a hand on her stomach.

All three were dressed for bed, as the 28-year-old wore a Christmas-themed top while the sisters both donned plaid pajamas.

The soon-to-be mother of five captioned the post: “We can’t wait to meet our second set of first generation TWINS!”

More Teen Mom fans quickly joined in as one person remarked:
“So cool, 2nd set of twins in the same family to be born in the same month!”

While another fan commented: “I wish we got to see more of your journey becoming a mommy.”

They continued: “May this year end beautifully for you and yours.”

As previously mentioned, Victoria celebrated Father’s Day with a special announcement on her Instagram.

Victoria gushed about her love for her husband Royer Rodriguez in the post, revealing she knew that he was going to be “the best father and stepdad.”

Victoria wrote: “I couldn’t be any happier to do life and raise our children with you!”

She shared how her “beautiful family will be growing” and added, “We’re having twins on December 16th.”

Victoria also opened up about the gender of her twin babies.

In the nearly two-minute video, Victoria and Royer appeared to be playing a game of softball.

Leah’s sibling swung the bat and struck the incoming ball.

She seemed surprised when a pink mist flowed out of the ball and into the air.

The pink mist meant that the couple are expecting twin girls.

Leah again jumped into the comments section and gushed about the baby news.

The Teen Mom 2 star poked fun at herself: “And they all thought it was me pregnant!” with a laughing emoji

She continued: “How did your due date land on the twins’ birthday though?!

“Congratulations you guys! You’ve got this!”

Leah is the mother of three daughters: Ali and Aleeah and Addie, nine.

Leah recently shared a behind-the-scenes video from a new family photo shoot with her own twin daughters.

The MTV star shared a video from the shoot with her 1.4m followers on TikTok.

In the clip, Aleeah showed off her blonde hair, which was glamorously curled.

She looked like a pop star in the making wearing baggy denim jeans, a blue top, and matching sneakers.

Meanwhile, Ali wore big round sunglasses and red lipstick, with her curly hair tied with a pink bow.

She looked grown up dressed in a pink T-Shirt, a grey skirt, and brown leather boots.

The twins struck a variety of poses for the camera.

Teen Mom fans couldn’t believe how grown up yet how different from each other the preteens now look.

“They are getting so big and even though they look nothing alike, both are so beautiful,” wrote one.

“They are so freaking adorable. Aleeah looks like an absolute pop star and Ali looks like the coolest, trendiest girl you know. So drastically different but both so cute,” agreed another.

A third wrote: “These girls have grown into such beautiful young ladies.”

Leah shares the twin girls with her first husband Corey Simms and nine-year-old Adalynn with her second husband Jeremy Calvert.