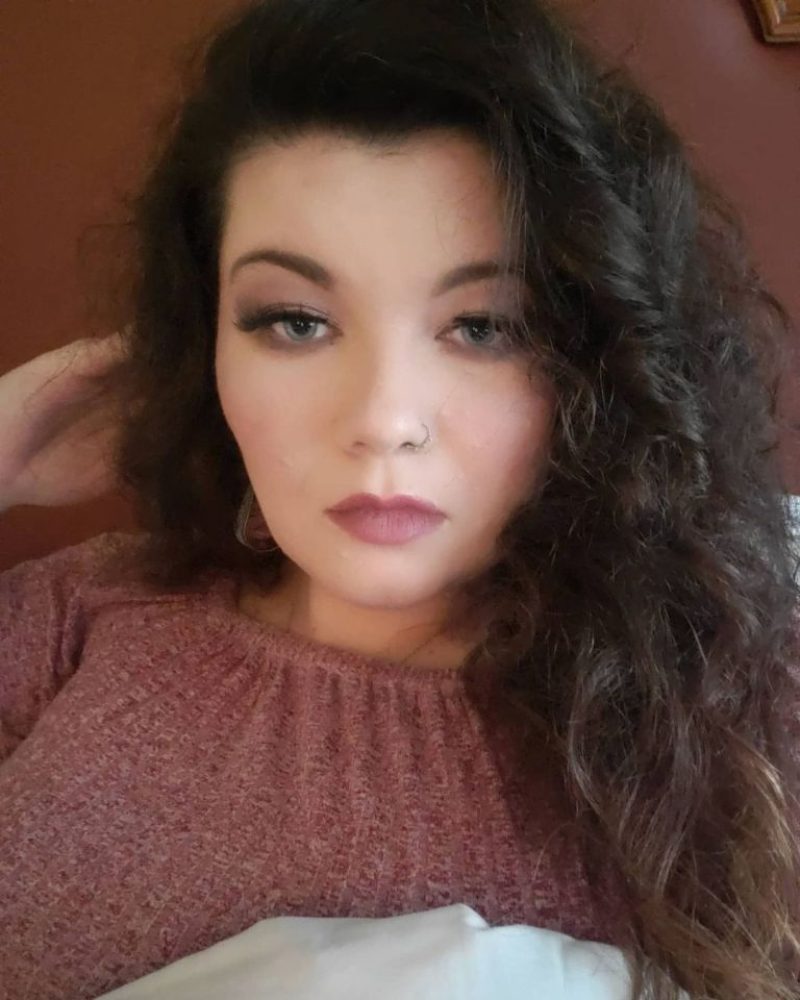 TEEN Mom Amber Portwood has made a new confession on social media about herself, after losing custody of her 4-year-old son James.

The Teen Mom star posted a photo of herself, looking slimmer than ever, wearing a black dress with a ivory-colored lace cardigan.

With one hand on her hip, she gives a stern look to he camera.

Her lengthy message on the photo reads: “I am, actually, none of these conditions that weave in and out of my minutes every day. I am not just some angry, sad, desperate, lonely, manic, passionate, loud, sweet, smart, funny, creative, sarcastic girlfriend and mother.

“I am what is underneath all of these conditions, disorders, addictions, and traits –those qualities that make me an excellent reality star and give such good material for gossip magazines and tabloid television.”

She continued: “I am what you are about to read. I am a collection of poems, ruminations, research, philosophies, stories, feelings and anecdotes formed by my experiences and reading.

“I am an unfinished sculpture and a work in progress. I am figuring this out as I go along and sharing what I learned.

“I am strong. I am beautiful. I am crazy. I am me,” she finished with a link to her book, So You’re Crazy Too?

She captioned the post: “I’m always learning and evolving… never be so afraid that you just don’t try.”

Fans loved the message and posted comments of support.

“You are an ever evolving soul, and I love that about you! You are absolutely beautiful from the inside out!” wrote one fan.

Another cheered: “Rooting so hard for you girl.”

“I see the growth and don’t believe everything I read, see, hear!” wrote another.

One critic wrote: “Stop talking about it and do it. S***, you’re missing your kids milestones every day. Take some accountability and do something to change it.”

Amber’s post comes as The U.S. Sun exclusively revealed that she now has greater access to her son through phone calls and FaceTime chats, since her no-contact order against Andrew, 38, has been lifted.

The more open lines of communication between Amber and James could be a game changer for the Teen Mom star’s ongoing relationship with her son, considering he now lives over 2,000 miles away from her with his dad in California.

The judge’s ruling states that Amber is now “entitled to liberal telephone calls and or FaceTime communication with the child.”

If Amber and Andrew cannot agree on the days and times of her calls, the judge set a schedule for every Tuesday, Thursday and Saturday at 5:30 pm PT.

Amber’s no-contact order was lifted back in June, and Andrew appears to have relocated with little James to California in recent months.

After a long and brutal custody battle between the Teen Mom star and her ex, an Indiana judge granted Andrew sole custody of James in July and granted his petition to re-locate with the four-year-old to California.

The custody judge wrote that several factors weighed into her decision to award Andrew sole custody over him and Amber’s son James.

The judge zeroed in on the star’s book she teased in her Instagram post, which was released just weeks before her and Andrew’s final custody hearings.

In the judgment, she wrote that in the book Amber “discusses her significant history of substance abuse, her history of domestic violence, her volatile attitude and propensity for aggression, her extensive mental health issues, her belief that the in-patient facility she attended for anger management should have instead been for drug use.

“Her fear she will never have overnight parenting time with her son, that she finds herself canceling on her son more often than she would like, and the idea of getting off probation soon concerns her because she will be unwatched and unchecked,” the judge concluded regarding her concerns about issues Amber addressed in her book.

Additionally, the judge mentioned the Teen Mom OG star’s outbursts in the final stages of the case, which transpired earlier this year.

“Mother was often emotional during the deposition and had to leave the room on several occasions.”

She also factored in Amber’s behavior during the final hearing dates, which were in early March, and wrote in the judgment that “Mother demonstrated difficulty regulating her emotions at different points while testifying.”

Amber’s ex Andrew, meantime, is furious after he was accused of trashing her home and he has proof he didn’t do it, a source exclusively told The U.S. Sun.

The source claimed Andrew was sure to document his departure from the home to prove the property was in good condition when he and their son James, 4, moved out last month.

The insider claimed: “There was a walk-through of the house the day Andrew left.

“Several people saw the way things were, and that everything was left in order.

“Andrew is notorious for documenting everything. The condition the home was left in was of course filmed and photographed.”

However, Teen Mom Next Chapter viewers saw Amber return to her Indiana house- and the property appeared to be trashed.

The MTV star walked through the home with ex-fiancé Gary Shirley, his wife Kristina, and her daughter Leah, 14, by her side during the episode.

In addition to the overgrown grass in the yard, it appeared that Andrew left a number of personal effects all throughout the home.

There were clothes, bits of bedding, and more strewn about in every room.

The tub was full of debris that could not be identified.

Carpets throughout the house were stained, as were many of the walls and other surfaces.

Gary, Kristina, and Amber noted an odor of urine in the home, though it’s unclear whether it was human or animal.

Closets were still full and there were toys all over the house as well.

As Amber prepared to head upstairs to the room that was once her son’s, she said: “Is this even real right now? Please God help me.”

Leah said: “I would have called CPS on him.”

After looking over the home, Amber told Gary: “I feel really sick to my stomach.”

Gary responded: “Nobody should live like that. Not any child.”