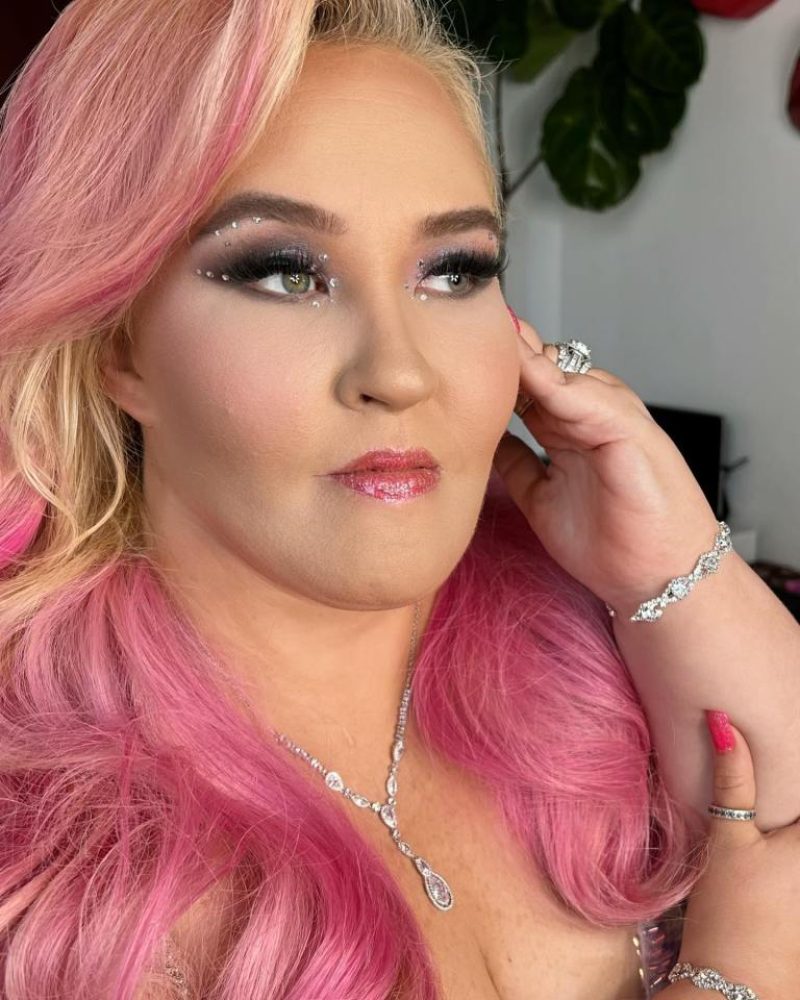 MAMA June has shown off her massive fake lashes and hot pink hair in a new video after a beauty makeover.

The From Not to Hot star first debuted her new look while she vacationed in El Paso, TX back in October of this year.

June Shannon, 42, flaunted her pink hair and fake eyelashes when she took to TikTok to notify her fans that she’ll be “shouting out” several small businesses in the coming weeks.

In the video, the TLC star stated “I’m here for a couple different reasons,” before proceeding to name them.

She first reminded her followers that “there’s only thirty-five days left till Christmas,” then told her fans that “this Saturday coming up, is small business Saturday.”

June’s long lashes were on full display throughout the runtime of the TikTok as was her pink-streaked hair though the color appeared to have faded some since she first showcased her makeover.

Back in October, June revealed her new makeover on Instagram with a glammed-up post that impressed the reality TV star’s fans.

June posted several photos of her makeover, with the first featuring the TV personality all done up while she visited El Paso, Texas.

Pink hair dye highlighted her natural blonde locks as she donned bright red lipstick and a black and white shirt.

The second photo is similar to the first, though June added jewelry to her wrists and neck as well as rhinestones around her eyes.

The third pic, shared because she “still looked awesome,” is a selfie of the Here Comes Honey Boo Boo alum.

It showed June with her hair up into a side ponytail after the day’s events and after some of her makeup had been removed.

In the post’s comment second, one fan wrote, “The most glam version of you ever put out!”

Another person commented: “Wow! You look so beautiful.”

While a third fan agreed, writing “You look great!”

June also showcased her hot pink hair in a new video posted by her husband Justin Stroud on Instagram.

The post featured several clips of the couple from various outings and other time spent together.

Justin took to Instagram to fawn over his wife, writing: “I feel like I’m falling in love every day…”

Text over the video read: “I spend every day with my best friend.”

The first clip in the video showed the couple posing in front of a plant wall backdrop with a neon sign that reads: “You’re like really pretty.”

Mama June’s bright pink hair is on full display in the photo.

Recently, the From Hot to Not star shared a heartfelt tribute to her husband, leading to backlash from fans.

In a nearly minute-long video posted to TikTok, Mama June shared pictures of herself and Justin before switching to a montage of quotes about love, relationships, and life.

June captioned the post: “No matter [what you] will be my forever.”

Justin and June tied the knot in a courthouse ceremony in Georgia on March 23rd of this year.

In the months since, however, some fans have felt like June has been more focused on her romance with Justin than repairing her relationship with teenage daughter Honey Boo Boo or her other kids.

One TikTok user commented: “Please Think about your Kids, a man is like a Bus Stop one on Every Corner.”

Another person said: “Great job mom!!! Choose a man over your f*cking daughter!! Bravo,” while a third fumed: “ur forever should be ur f*ckin kids!”

Someone else raged: “stop being hungry for loser men … your kids and grands will love you unconditionally that should be all.”

Another accused her: “Here’s your perspective. Men > Your Children,” while a different person wrote: “where’s your kids? they should be your forever, not a guy. Probably should take the ‘mama’ out of ‘mama June’.”

Someone else simply stated: “You should be spending time with Alana.”

June’s daughters Lauryn ‘Pumpkin’ Efird and Alana ‘Honey Boo Boo’ Thompson are in talks for their own reality show without the estranged matriarch.

An insider close to the family exclusively told The Sun that Pumpkin and Alana have a meeting lined up about their own show later this month.

“They are in talks about having their own show and they will be meeting about it in the next few weeks.”

The source said that the family is on their way to Los Angeles right now, although it’s unclear if they’ll be meeting with production while they are out there.

“Pumpkin packed up the SUV. She is driving out there with Josh, the twins who are just two months old, Ella and Bentley. Alana and Dralin are also driving.

They are taking two cars because they can’t all fit, especially with all those car seats!”

The source said the family plans to stop at the Grand Canyon and take in the other sights along the way.