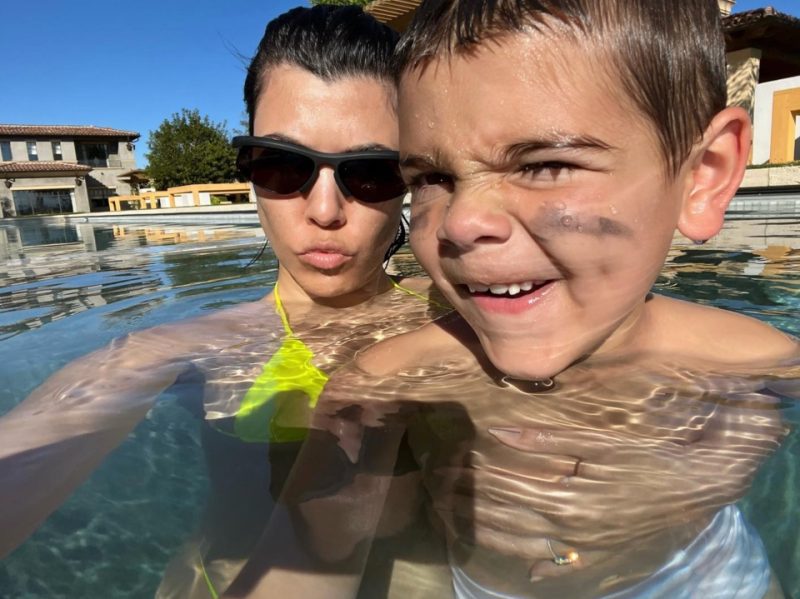 KOURTNEY Kardashian has revealed she keeps a hunk of her son Reign’s hair in her secret bedroom drawer.

The Kardashians star, 43, horrified fans by admitting she “often” smells the seven-year-old’s locks.

Kourtney made the confession during a chat with her sister Khloe, 38, for Interview magazine about her new Lemme sleep supplements.

At one point, Kourtney said: “I will tell you one thing that’s in my secret drawer.

“I have Reign’s hair, because we didn’t cut his hair until he was five. So I have his long braid and I smell it often.”

Kourtney added: “I’ll show you when you come over later.”

Khloe hastily declined the offer, saying: ” Oh no, I’m fine with that. It’s like, oh my gosh. Rapunzel?”

Kardashian fans were shocked by Kourtney’s admission, with one writing on Reddit: “That part made me go ‘lol what?’”

Another posted: “Am I the only one who thought this was weird?”

A third was less surprised, commenting: “Ofc Kourt keeps her son’s hair in a drawer and smells it.”

Kourtney has three kids with her ex, Scott Disick – Mason, 12, Penelope, 10, and Reign.

Last month, she left fans divided after revealing she still co-sleeps with Penelope.

“She’s slept with me every day since she was born and pretty much still does,” Kourtney said on Amanda Hirsch’s Not Skinny But Not Fat podcast.

“Unless she has a friend sleep over or unless she leaves me to go sleep at Travis’ [husband Travis Barker] or Auntie Coco’s [Khloe Kardashian] or Auntie Kiki’s [Kim Kardashian]. But besides that, we are so close.”

This isn’t the first time Kourtney has opened up about her children’s sleeping habits.

In 2018, she said she had a “different experience” of co-sleeping with each of her kids.

In a blog post on her website Poosh, the Hulu star noted that she read The Attachment Parenting Book by Dr William Sears while she was pregnant with Penelope.

The book has lessened the stigma around parents and kids sleeping in the same bed.

Kourtney also said she did “responsible joint sleeping” with her eldest child, Mason.

“I remember going through times of trying to get him to sleep in his own bed. Many nights he would start off in his room and make his way into ours,” she wrote.

“I eventually embraced a family bed and followed his lead for when he was ready to sleep in his room. When he was seven, he started sleeping in his room on his own.”

She revealed she has a strict policy concerning junk food and diets for her children and has banned Mason from eating fries.

The Poosh founder recalled a time when her eldest child wanted fries from McDonald’s but she refused.

Following the backlash, Kourtney explained on Instagram: “We love and eat lots of French fries, but we do try to avoid fast food French fries!”

Kourtney then proceeded to list the ingredients in French fries, which include “potatoes, vegetable oil, hydrogenated soybean oil, and natural beef flavor”.