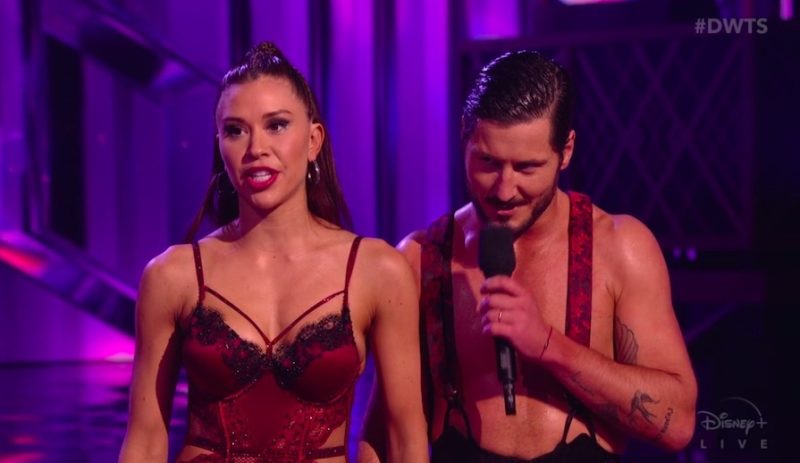 DWTS finalist Gabby Windey has endured an embarrassing moment during the final episode of the competition show.

During her freestyle dance to The Cellblock Tango from the musical Chicago, Gabby got her shoe stuck in her dress.

She was wearing a sexy maroon and black lingerie set with a flowy skirt that showed off the flare in her dance moves.

As she twirled on the floor, her heel got caught in the frills of her skirt.

It was still stuck after her partner Val Chmerkovskiy picked her up from the floor, and she remained caught in her skirt until the end of the dance. Val quickly unhooked her when the lights went down.

The blunder did not go unnoticed. Len Goodman, a longtime judge on the show, mentioned the flub during judging.

DWTS pro drops out of finale after suffering injury during fall

All of the judges praised her and the dance, and Len said she “stayed cool” through her wardrobe malfunction.

Even with the malfunction, Gabby and Val got a perfect score from the judges.

TikTok star and teenager Charli D’Amelio won season 31 of DWTS, but fans of the show weren’t happy with the results.

The competition was tight, and Charli was up against Wayne Brady, Shangela, and Gabby Windey who all performed two routines to win the Mirrorball Trophy.

Gabby scored the position as runner-up, but Wayne and Shangela went home empty-handed.

While Charli’s fans were thrilled that she won, other people took to social media to complain about the outcome. Some called it “rigged.”

A DWTS fan said: “This was rigged from the jump…a trained Dancer…with years of experience…that has gotten favoritism from the jump #DWTS.”

Tons of fans believe that Wayne deserved the win because of his positive attitude and how much he’s improved over the season.

Judge Len Goodman and professional dancer Cheryl Burke are leaving Dancing With the Stars at the end of this season.

Cheryl, who has been on the show for 26 seasons, announced her DWTS retirement on social media.

She wrote: “The cast, crew & fans have seen me through my highest highs & some of my lowest lows, & I honestly don’t know who I would be today without them. I also know that it is time for me to begin the next phase of my career, although dance will always be a part of me.”

Cheryl will be focusing more on mental health advocacy and podcasting, but she’s also admitted to coveting Len’s seat on the judge’s panel.

Len has been on the show since it started 17 years ago.

DWTS fans will miss him dearly. One said: “Thank you Len Goodman! A true professional with laser focus vision and an inspiration to many around the world.”

Disney+Thankfully, the wardrobe malfunction was at the end of the dance[/caption]

PrevPreviousToday fans beg for Al Roker’s quick return to show as weatherman resurfaces for first time after rushed to hospital
NextWho is Katherine Ryan and how many children does she have?Next