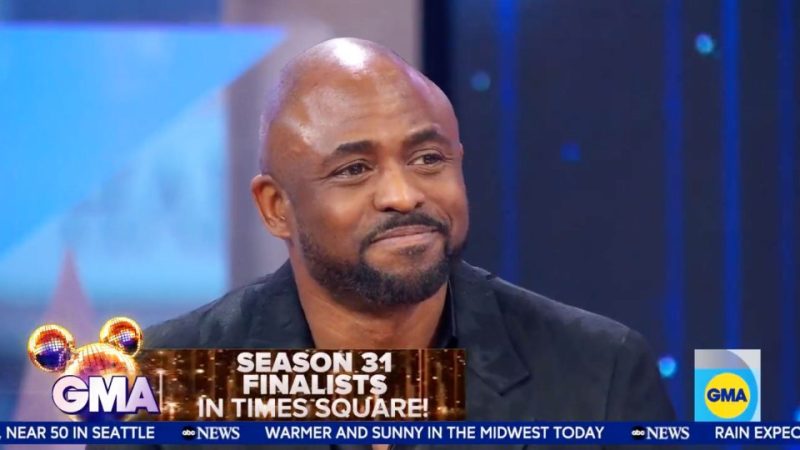 DANCING With The Stars finalist Wayne Brady has held back his tears on live TV.

The Good Morning America hosts surprised him with a sweet video from his daughter, Maile, 19.

GMAMaile, 19, told him that he is ‘always a winner’ and that she is ‘so proud of him’[/caption]

On Tuesday morning, the four DWTS finalist appeared on the morning show.

They sat down for interviews, sang with Jordin Sparks, danced, and freestyled.

During the interview portion, Michael Strahan told Wayne that they had a “special message for him.”

“It’s from your daughter,” he said.

Everything to know about comedian Wayne Brady

Maile appeared via video and showered her dad with love.

“Hey dad. I am so proud of you for working as hard as you did, balancing everything, and doing the show. You are always a winner. And I’m just so excited to spend time with you now that it’s over,” she said.

The camera flashed back to Wayne, who shut his eyes and smiled.

“How sweet is that, man?” Michael asked.

“You did, and you brought it. Each and every one of you did,” Robin Roberts said.

As Wayne tried to not cry, Michael threw a joke his way.

“And then you iced right after she said that,” he said.

“As she was talking to me, I was like ‘ughh’,” Wayne gestured putting ice on his knee.

Maile is the only child of Wayne, whom he shares with his ex-wife, Mandie Taketa.

Although Wayne was a fan-favorite throughout the season, he did not win the mirrorball.

Him and Witney placed third after an impressive season.

Some fans thought he was at a disadvantage because he missed out on rehearsal time.

The night before the finale, Wayne hosted the American Music Awards on ABC.

His partner, Witney Carson, even made an appearance on the show for a short dance number.

Although it was a dream role for him, the extra duties made him more tired and skip practice.

“Could Wayne be at a disadvantage after he just hosted the AMAs? That’s exhausting and less time to rehearse,” one fan asked.

To that, another fan replied: “I think it could work but for and against him.. like it got a few more eyes on him so may have gotten him some additional votes but also yeah, it’s gotta be exhausting. Luckily for him, they love handing out 10s in the finale.”

A third chimed in, doubting that he will win, and wrote: “Gabby or Charli will for sure get the Mirror Ball trophy tonight!”

“If Wayne does not win, I’d still be just as happy if someone else won it!!” commented an optimistic fan.

“Plus, he will probably get a lot of additional support after the AMAs last night. I’d still be just as stoked for the other three too though!!”

A Reddit user replied to them, saying: “I think Wayne could take it. His type is the demographic favorite, he really doesn’t have any outside controversies, and people are still upset Witney didn’t win with Milo or Kel.”

DWTS fans wanted Wayne to win, but knew that Charli D’Amelio would be crowned the winner.

Many of them said she had an “unfair advantage” because she already had dance training.

Fans took to Twitter to express their opinions on the matter.

“If Charli wins, I’ll be disappointed. I’ve watched this show for years and it’s always been about the journey of dancing.

“I’m still rooting for Wayne Brady to win #dwts of course,” said another.

Another fan replied: “Same here! Between Wayne and Charli for me though!”

However, the first fan disagreed: Charli is a strong competitor but I think Wayne could take it.”

Another fan agreed that even though Wayne should win, Charli most likely will.

“I’m rooting for Wayne Brady, but realistically, I see Charli winning it all! All her dances are perfect!” they wrote.

Another chimed in: “I want Wayne to win so bad. But I know for a fact Charli and gabby are the bottom two for that trophy without a doubt #DWTS.”

An angry fan wrote: “This is the most pointless finale ever tbh. Charli automatically wins because of her fanbase and voting! The only way Wayne or Shangela [has] a chance is if they rig and that’s the truth. I feel Gabby will be 2nd either way #dwts.”

ABC/Eric McCandlessWayne and his partner, Witney Carson, placed third on the finale of season 31[/caption]

SplashMaile is Wayne’s only child, whom he shares with ex-wife, Mandie Taketa[/caption]

PrevPreviousWho are August Alsina’s brothers?
NextWelcome to Chippendales cast: Who stars in the mini series?Next