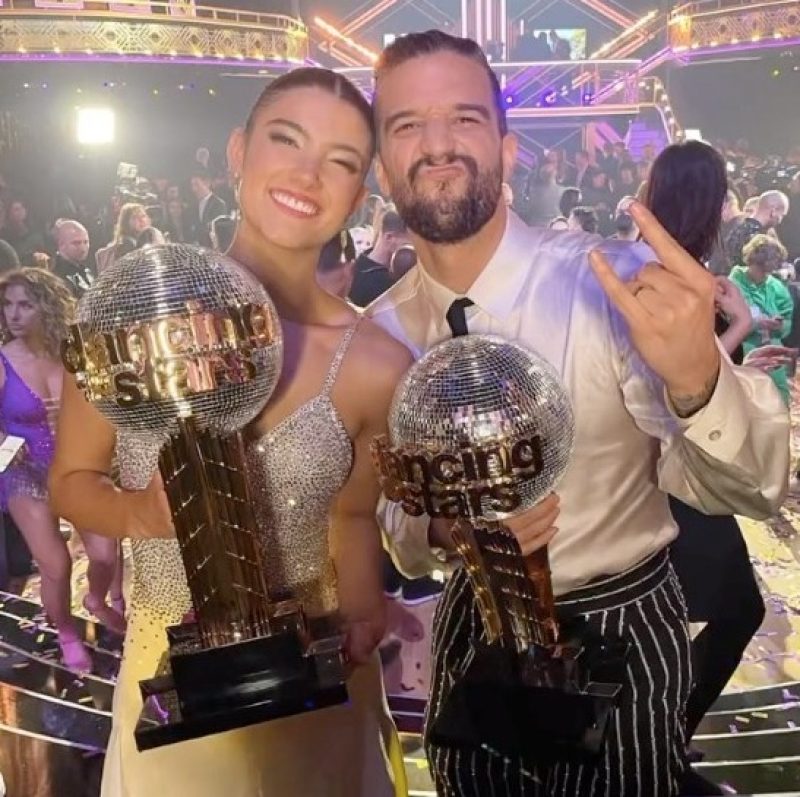 DANCING With The Stars fans have been left divided as Charli D’Amelio is crowned the winner of season 31.

Some fans believe the show is rigged based on the results.

Monday night’s finale of DWTS saw stiff competition as four contestants vied for the mirrorball trophy and title of champion.

It was one of the tightest finales in DWTS history, as each contestant has consistently been at the top of the leaderboard throughout the competition.

The first round was a redemption dance, picked by the judges while the second was the highly-anticipated freestyle round.

DWTS pro drops out of finale after suffering injury during fall

After 11 weeks, a winner was finally crowned and fans are left divided.

In the end, Charli and Mark, secured the win.

This is the third win for Mark, making him the second highest-winning pro in DWTS history, after Derek Hough.

Gabby and Val were the runner up, while Wayne and Witney and Shangela and Gleb went home empty handed.

Many DWTS fans were happy with the results and congratulated the pair.

“YES!! Congrats Charli and Mark for winning this season!! Well deserved!! Been rooting for them since the season started! #DWTSFinale#DWTS,” wrote one fan. ‘

“I geniunely think Charli and Mark were THE pairing tbh. like they fit each other like a glove and that’s why they won. Not bc Charli can dance, but because it was two people that could dance together as they were one seamlessly. Shoutout to both of them for a wonderful run #DWTS,” said another fan.

An third added: “So so so happy for Charli and Mark. She is the best dancer I’ve ever seen compete on this show. Very much deserved. Also glad to see Mark get #3!!! #DWTS.”

“im so happy mark won on his first season back, he choreographed some amazing routines and he and charli executed them all perfectly. #dwts,” tweeted a happy fan.

“WE DID IT! @charlidamelio I’m so proud of you and mark through this entire journey of urs. #DWTS,” tweeted a Charli fan.

However, some fans took to social media to comment on how the competition is rigged.

“(don’t get me wrong on charli), but this season was probably the most rigged and predictable season i’ve ever seen! the favortism was obvious and it contributed nothing #DWTS,” wrote one fan.

“Exactly. I’m sorry, but Charli did NOT deserve this win. @officialdwts is RIGGED!!” wrote an angry fan.

A third said: “I think #DWTS was rigged.”

“#DWTS I’m sorry, but if you ever cast a trained PROFESSIONAL dancer, or some d**n TikTok child with over 100 MILLION followers who will vote for her without even watching again, my family will not be watching. Rigged! Rigged! RIGGED!” an angry fan wrote.

“This was rigged from the jump…a trained Dancer…with years of experience…that has gotten favoritism from the jump #DWTS,” said another.

Many fans believed Wayne and Witney deserved to win season 31.

He was the favorite because fans believed he improved the most throughout the season and kept a positive spirit .

However, most fans predicted that Charli would win because she had prior dance experience and perfect scores week after week.

The 18-year-old has been competitively dancing since she was five years old, but does not have any ballroom experience.

She gained her fame by creating dance routines on Tiktok.

Before last week’s finals, fans took to Twitter to say how she had an unfair advantage and how the comedian should win.

An angry fan wrote: “This is the most pointless finale ever tbh. Charli automatically wins because of her fanbase and voting! The only way Wayne or Shangela [has] a chance is if they rig and that’s the truth. I feel Gabby will be 2nd either way #dwts.

“Rooting for a Shangela or Wayne win tonight. Wouldn’t mind a Gabby win. Charli is very deserving (they all are) but she has incredible dance experience and I never like seeing ppl with that much experience win the show #DWTS #DWTSFinale,” said another.

END OF AN ERA

The season 31 finale was a bittersweet ending.

It saw Cheryl Burke dance her final routine, after 26 seasons of being a pro.

Cheryl, 38, took to Instagram to confirm her exit and posted a fire-y photo of her in a bold red ballroom gown.

The 38-year-old is the first female pro to win the mirrorball and the first to win it back to back.

She reminisced on her many years on the show and shared: “I am sitting here full of so many conflicting emotions about the words I am about to write…

“Tomorrow night will officially be my final dance as a pro dancer on @dancingwiththestars. This has been one of the absolute hardest decisions of my life and I am also confident that it is the right one.”

In a long dedication, she reminisced over the show that has shaped her ballroom career.

He has been the head judge since the show began and announced his departure on last week’s show.

The penultimate episode of DWTS’ season 31 featured several shocking moments from Witney’s pregnancy news to Gabby discussing her split and, finally, Len, 78, revealing his next chapter.

Len told viewers: “Whilst we’re all getting excited and looking forward so much to the finale next week, it will also be with a touch of sadness as this will be my last season judging on Dancing With the Stars.

“I’ve been with the show since it started in 2005 and it has been a huge pleasure to be a part of such a wonderful show, but I’ve decided I’d like to spend more time with my grandchildren and family back in Britain.”

The head judge continued: “I cannot thank you enough, the Dancing With the Stars family. It’s been such a wonderful experience for me and I’m looking forward so much to next week’s finale. I’m sure it’s gonna be absolutely brilliant.”

Many fans on Twitter expressed their sadness and wishes him well in their next phase of life.