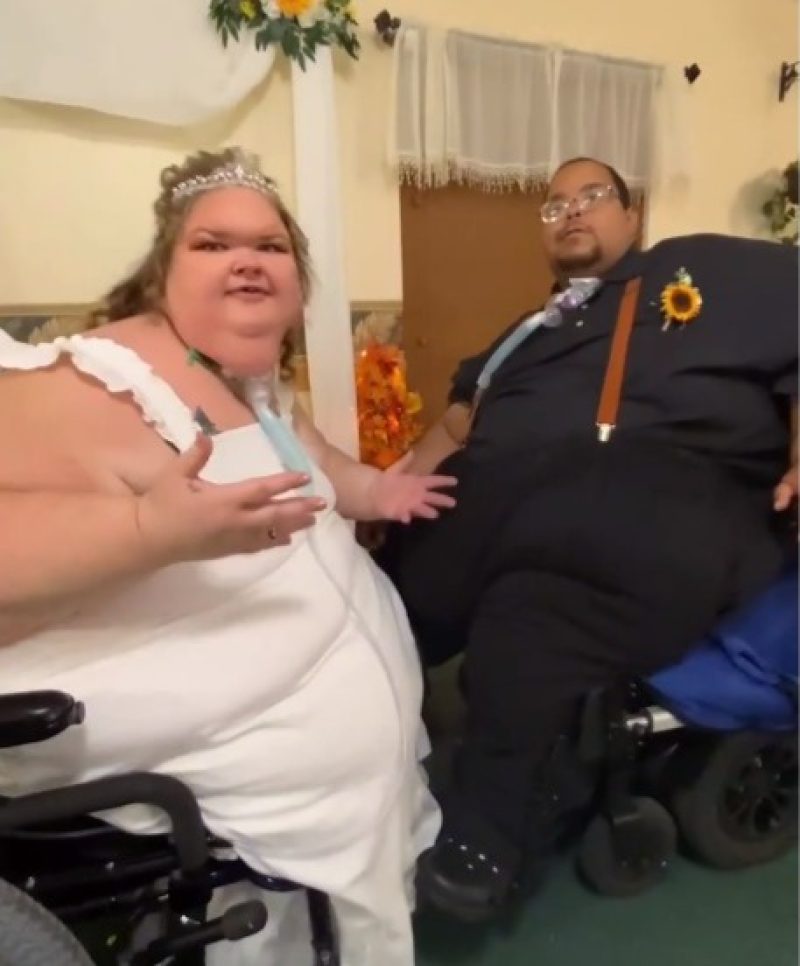 TAMMY Slaton from 1000-lb Sisters has confirmed that she is no longer a Slaton sister because she got married in rehab.

TLC posted a video on their Instagram promoting the new season of the Slaton sister’s reality show.

Instagram Tammy SlatonShe got married on Nov. 19 surrounded by friends and family[/caption]

The video starts with Amy standing in front of Tammy and her new husband, Caleb Willingham.

Amy said: “There is no more Slaton sisters. I would love to present to y’all the Willingham’s.”

Then, Tammy said: “Y’all knew me as Tammy Slaton, but now y’all know me as Mrs. Tammy Willingham.”

Before he kissed Tammy’s hand, Caleb said: “You’re mine all mine.”

Tammy was decked out in her pure white wedding gown with ruffled straps and a sparkly tiara.

Fans on Instagram commented under the video to point out that Tammy hasn’t lost weight in rehab.

Someone said: “Why isn’t she losing weight?? Is it for the show?? It’s not worth it. I’m happy she found love, but sad that they both live with trachs and wheelchairs.”

Another person said: “So, Tammy has not lost any of the weight.”

A fan said: “She won’t lose weight! She gets so discouraged then she gets mad. How are they going to take care of each other? She wanted to be married before she dies. At least she will die happy.”

Another fan said: “I thought she was going to lose weight, instead she gain a husband….not healthy at all.”

Some followers expressed hope that they will encourage each other to lose weight and create a healthier lifestyle as a married couple.

A fan said: “I just wish they can encourage each other to lose the weight really sad to see them both in chairs.”

Another person said: “Congratulations to Tammy but I would love to see her and her new hubby continue their weight loss journey.”

Someone else said: “They can do this together that’s more motivation for them both! I love this!”

Tammy and Caleb got married on Saturday, November 19, surrounded by 30 of their closest friends and family.

A source close to Tammy said: “She began dating Caleb in rehab, and I’m so happy they met in person and were not dating online.”

The source also shared that the happy couple is planning to honeymoon in Florida when they get the opportunity.

Caleb plans on moving in with Tammy when they are both released from the rehab facility.