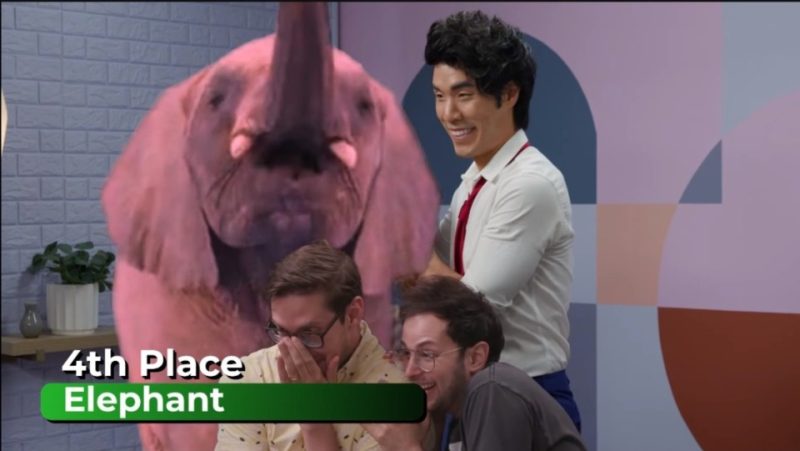 THE TRY Guys have expressed their true feelings toward former member Ned Fulmer following his firing from the group.

The YouTube star was axed from the comedy show for having an affair with an employee.

GettyNed was edited out of future episodes after he admitted to cheating on his wife, Ariel, with producer, Alex Herring[/caption]

However, the team had to do some noticeable reworks to the episode as it was recorded prior to Ned’s firing.

In the 40-minute-long episode titled, The Try Guys Make Pop-Tarts Without A Recipe, the trio blindly baked the sweet treats in hopes of impressing three expert bakers on the judge’s panel.

But with one man down, the team decided to get creative in their editing, mocking the omission of their ex-partner.

Read More on The Try Guys

In scenes Ned was in, they replaced him with an animated pink elephant, which fans joked addressed the “elephant in the room.”

And in another shot, the influencers opted to keep Ned in the background, though only capturing his shirt, which read: “I love bad ideas” – a nod to his cheating scandal.

The move garnered a slew of comments from fans commending how the group handled their ex-colleague’s actions.

“The sheer balls to not even crop him out and straight up covering him with random s**t is amazing,” one person wrote.

“The fact that Keith originally had another person in the room to riff off of, but the final edit doesn’t feel like anything is missing…. literally incredible. Whatever the editors are being paid, it isn’t enough,” remarked another.

“Ned wearing a shirt that says “I love bad ideas” is so ironic and honestly hysterical,” a third laughed.

“It was an absolute brilliant idea to make Ned the elephant in the room,” a fourth applauded.

Upon announcing Ned’s firing in a video on their channel, The Try Guys shared their plans to edit him out of future videos.

They also said that some footage was “fully unreleasable” due to Ned being heavily featured in them.

Ned was booted from the group in September after he admitted to being unfaithful to his wife, Ariel, who he often talked about on the show.

Fans discovered the 35-year-old’s cheating ways after noticing his absence in recent videos and on their podcast.

A deeper investigation by concerned viewers revealed that Ned was romantically involved with the show’s producer, Alex Herring.

The post read: “Family should have always been my priority, but I lost focus and had a consensual workplace relationship. I’m sorry for any pain that my actions may have caused to the guys and the fans but most of all to Ariel. The only thing that matters right now is my marriage and my children, and that’s why I am going to focus my attention.”

Ariel also posted a message thanking fans for their support.

She wrote: “Thanks to everyone who has reached out to me – it means a lot. Nothing is more important to me and Ned than our family, and all we request right now is that you respect our privacy for the sake of our kids.”

The couple are parents to two children: Wesley James and Finley.

The post read: “Ned Fulmer is no longer working with The Try Guys. As a result of a thorough internal review, we do not see a path forward together. We appreciate your support as we navigate this change.”

InstagramAriel also shared a post thanking fans for their support[/caption]

YouTube/The Try GuysThe remaining The Try Guys members, Keith Habersberger, Zach Kornfeld, and Eugene Lee Yang, said they are editing Ned out of future episodes while some her ‘unreleasable’[/caption]