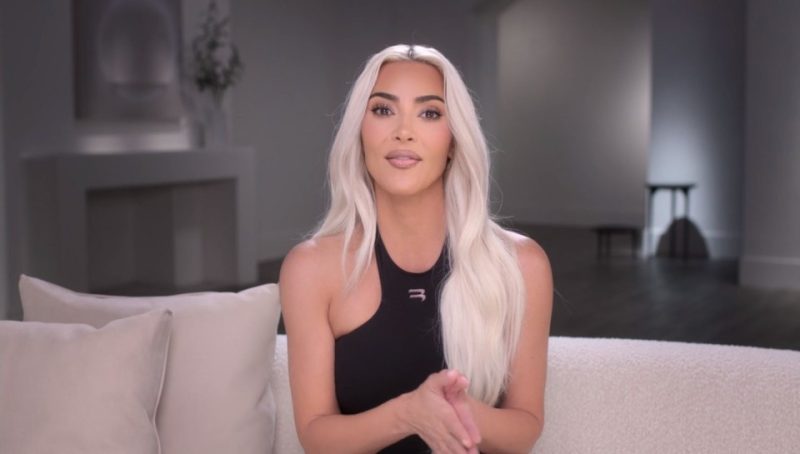 KIM Kardashian has flaunted her tiny figure in tight leggings in a new photo amid fans’ concerns over her drastic weight loss.

On Sunday, Kim shared a photo, initially posted by SKIMS‘s official Instagram page, of her modeling a white sports bra and matching bottoms.

The outfit had the brand name written all over it in gray lettering.

The shapewear’s founder posed, looking off to the side with her platinum blonde locks flowing down.

She had one hand on a wooden chair positioned behind her while a rack of black attire was also in the background.

The caption encouraged fans to sign up for their waitlist, reading: “Join the waitlist for early access to shop,” including a link to the SKIMS website.

The photo comes as fans have grown increasingly concerned about Kim’s shrinking waistline.

The 42-year-old recently admitted to losing over 20 pounds following a strict diet and exercise regimen.

Kim began dropping pounds earlier this year in an effort to fit into Marilyn Monroe‘s iconic dress for the Met Gala.

But her weight loss journey didn’t stop there as she continued to shed pounds in the months thereafter.

An insider recently told The U.S. Sun that Kim is hoping to maintain her thinner-than-ever physique, saying she “does not want to put on weight as she thinks she has never looked better than now.”

The Hulu personality’s confidence in her pin-thin frame has shown in photos as she’s posted many sexy snaps on social media in recent weeks.

Last week, she shared a selfie on Instagram of her sporting an extra-small thong bikini, showcasing her hourglass frame.

She also put her abs on display in baggy jeans and a silver bodysuit with cutouts in the midsection while promoting the launch of her skincare brand, SKKN’s pop-up.

The mom-of-four again raised eyebrows on Thursday after posting more sultry photos of herself donning a bikini top and sparkly low-rise pants, presumably from her 42nd birthday celebrations last month.

Some fans think the consistent thirst traps have been in response to her ex-Pete Davidson‘s new romance with model Emily Ratajkowski.

The former SNL comedian, 29, and the actress, 31, were spotted on a date in Brooklyn last weekend.

“Her first reaction was that he was hitting on Emily to make Kim jealous because he felt she had all the power, but now she finds out they have been dating for weeks.

“They weren’t together because she had chosen not to be, so she knows she can’t expect him to be faithful,” the source continued. “But it’s all the dishonesty from him, the daily messages about how he would wait for her and never wants to be with anyone else.

“It was a bombardment – and I think she genuinely believed it all. She really thought that he was sincere – everyone did – but now she feels like she didn’t know him at all.”

Kim and Pete dated for 10 months before calling it quits in August.

Fans think Kim’s photos are in response to her ex-Pete Davidson’s new romance with Emily RatajkowskiGettyInstagramKim was previously married to Kanye West, the father of her four children[/caption]