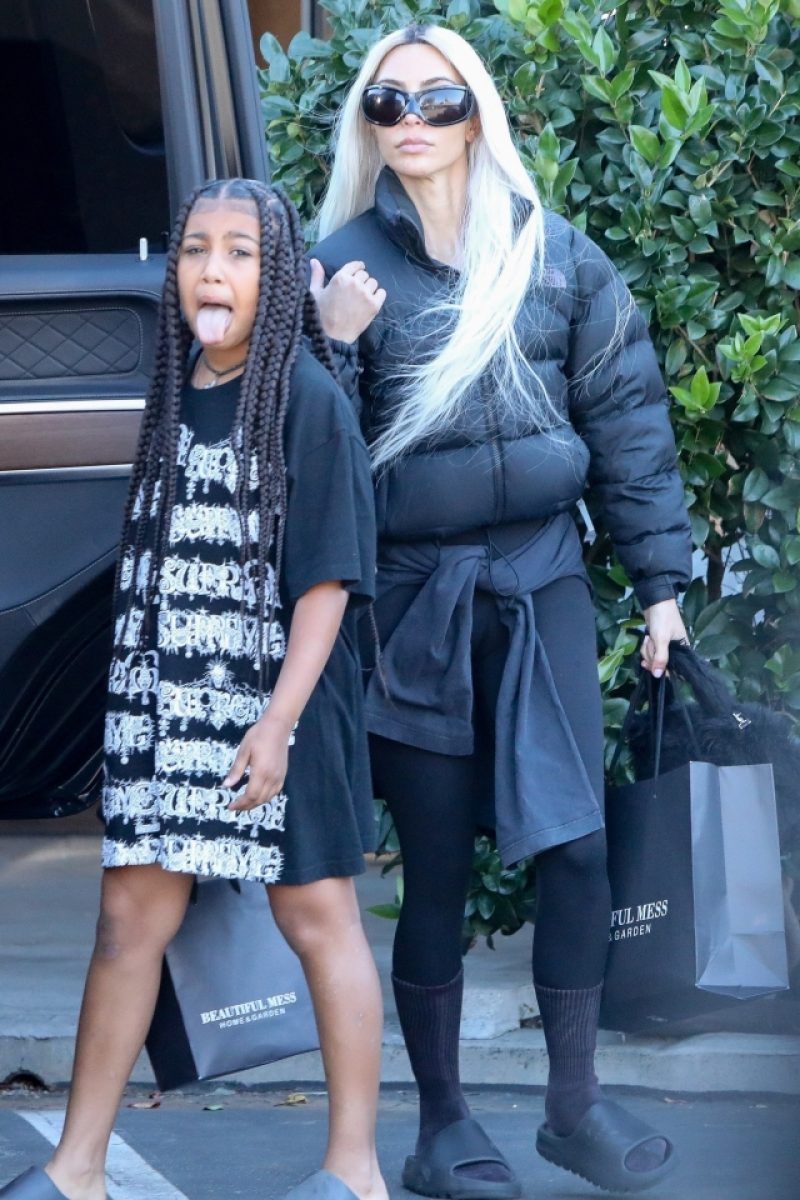 KIM Kardashian has shown of her real body while out on a shopping spree with her family.

The Kardashians star, 42, sported a very dressed down look while she shopped with her daughter North, 9, and sister Kourtney, 43 along with her son Reign, 7.

BackGridKim Kardashian was spotted out with daughter North, 9, while shopping[/caption]

BackGridSister Kourtney and her son Reign, 7, tagged along on the shopping spree[/caption]

The reality star wore black leggings, a large puffy black jacket and a sweatshirt tied around her waist.

The oversized jacket, hiding Kim’s tiny waistline that has been worrying fans for weeks.

She paired her ensemble with a pair of black slip-on flip flops, and socks.

KIM, IS THAT YOU?

Her daughter North, stuck her tongue out at cameras as they walked from on store to another in Los Angeles.

Kim’s sister Kourtney was spotted nearby shopping for items with her son Reign.

Reign looked adorable as he smirked at the cameras, while mom Kourt kept her shades on and looked away.

Kardashian fans have been catching more glimpses of Kim looking natural and not glammed up.

Kim recently ditched her makeup and decided to go barefaced in a TikTok video.

In the opening seconds, she had her hair pinned back while her eyes seemed to have dark circles around them.

She sat in a chair and donned a grayish robe while her pre-teen daughter painted her forehead and brushed the pores on her cheeks.

North demonstrated her makeup skills as she dropped dark and light shades of green on her mother’s face.

The end result was the Hulu star looking like The Grinch from the children’s book by Dr. Seuss.

Kim wore a green jacket as she showed off her newly painted face.

As the clip concluded, she mimicked the lyrics to the class Christmas song, “You’re a Mean One, Mr. Grinch”

This is not the first time the reality star displayed her unedited face on all her social media platforms.

North recently filmed her mother for another TikTok video, which she later deleted.

Kim previously posed in the direct sunlight and flaunted her freshly moisturized skin as she promoted her skincare line, KKW beauty.

The former E! star also allowed unedited photos of her with wrinkles to remain on the internet from a television appearance.

Since the launch of her skincare brand, Kim has been making tons of effort to prove that she uses her own products.

While fans find it refreshing to see Kim in her natural state, they have grown increasingly concerned about her shrinking waistline.

The 42-year-old recently admitted to losing over 20 pounds following a strict diet and exercise regimen.

Kim began dropping pounds earlier this year in an effort to fit into Marilyn Monroe‘s iconic dress for the Met Gala.

But her weight loss journey didn’t stop there as she continued to shed pounds in the months thereafter.

An insider recently told The U.S. Sun that Kim is hoping to maintain her thinner-than-ever physique, saying she “does not want to put on weight as she thinks she has never looked better than now.”

The Hulu personality’s confidence in her pin-thin frame has shown in photos as she’s posted many sexy snaps on social media in recent weeks.

She recently shared a selfie on Instagram of her sporting an extra-small thong bikini, showcasing her hourglass frame.

She also put her abs on display in baggy jeans and a silver bodysuit with cutouts in the midsection while promoting the launch of her skincare brand, SKKN’s pop-up.