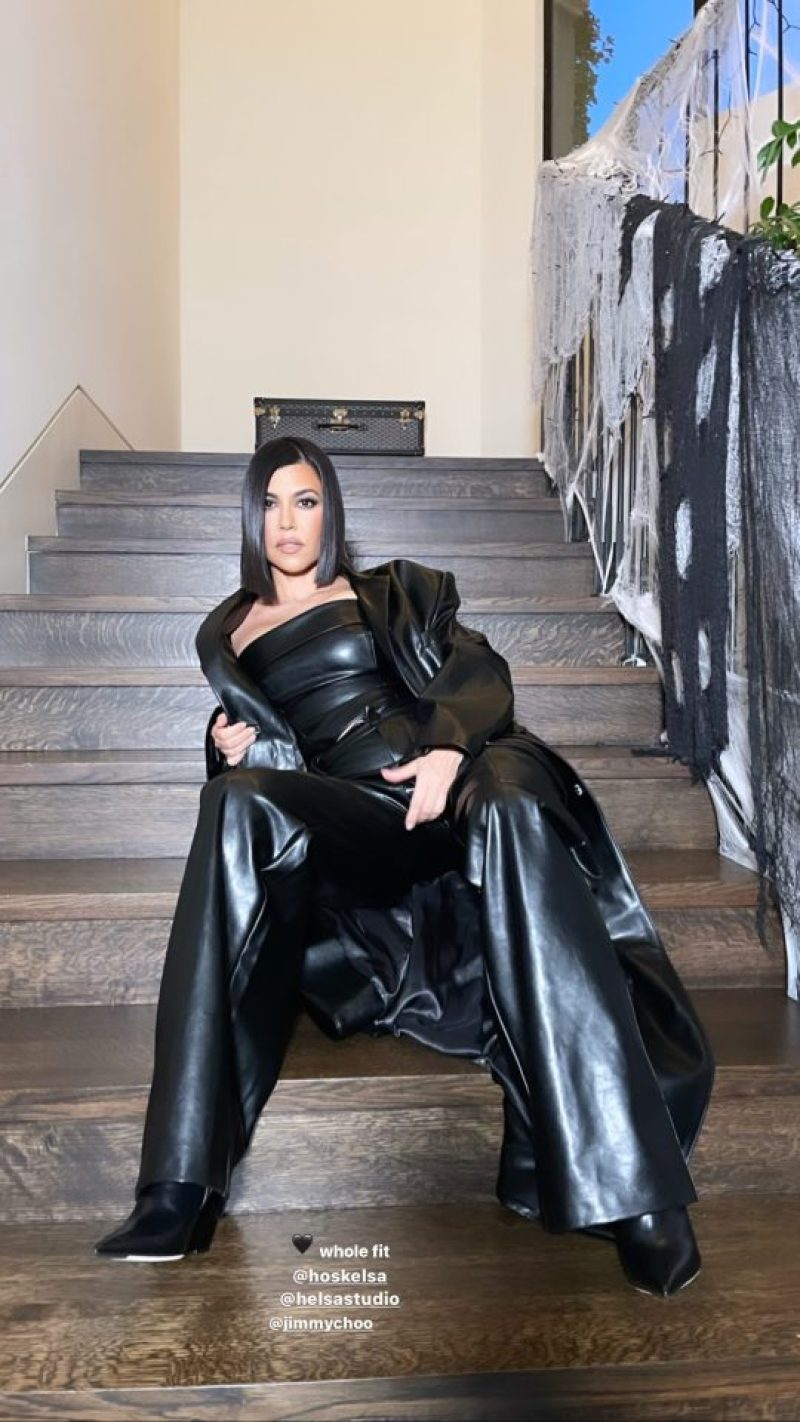 Kourtney, 43, shared a couple of snaps with her 204 million Instagram followers which showed her dressed head-to-toe in faux black leather.

The outfit, which was courtesy of a brand named HELSA, consisted of a $245 waterbased faux leather bustier top and matching cargo pants which cost $444.

The Poosh founder completed her look with a long coat of the same material and black boots as she posed on a wooden staircase at her home.

Kourtney modelled a nude makeup look and wore her brunette bob in a sleek straight smile as she pouted for the camera.

It’s thought that the pictures were taken last month as Halloween decorations can be seen on the bannister of Kourtney’s grand staircase.

However, her fans were more concerned by the bizarre face she was pulling in the second snap.

When one fan shared the pictures on a popular Kardashian Reddit page, one person commented: “Her face in the second pic?” to which someone else suggested: “Mid-sneeze.”

Someone else poked fun and wrote: “Snooze,” while another said: “I’m digging the semi-masculine pose in the first pic.”

One unimpressed Reddit user simply wrote: “Eh. No,” while someone else suggested the reality TV star would have difficulty getting the faux leather pants off and on again.

Kourtney’s new snaps came just a day after she told fans that she was feeling under the weather in a concerning new video and begged them for “help”.

The Kardashians star claimed to be “cleaning out” her bathroom rather than resting at the time.

She posted a makeup-free photo of herself holding a product in her hand.

The Lemme founder wrote: “I’m feeling sick and instead of sleeping I’m cleaning out my bathroom and closet and playing with products. Send help.”

She carried on sharing products that she came across along with links to Poosh about them.

The mom-of-three also showed off her natural skin when she shared another video where she appeared to be wearing no makeup.

Perhaps she decided to go bare-faced because fans had ripped a makeover she’d been given by her younger sister Kylie Jenner.

Plenty of people criticized the Kylie Cosmetics star after she gave Kourtney a glam makeover recently.

INSTAGRAM/kourtneykardashOver the weekend, Kourtney revealed to fans that she was ‘feeling sick’[/caption]