Jessica Simpson shares a rare photo of sister Ashlee’s oldest son Bronx, 14, and fans are shocked by how much he’s grown 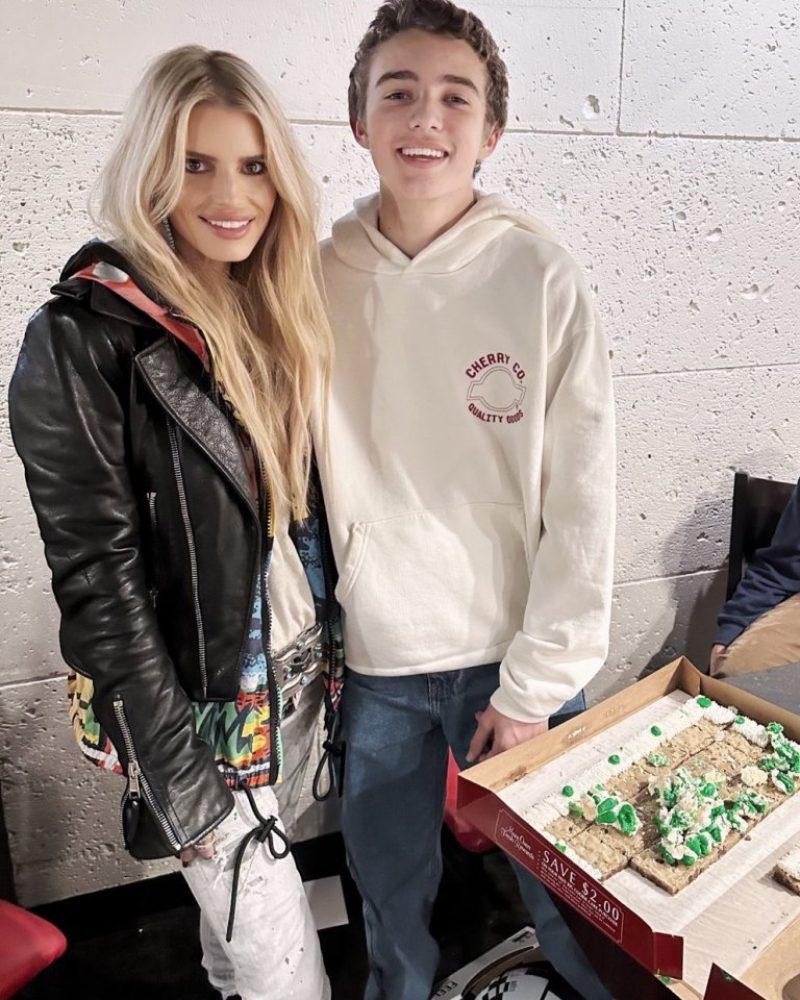 JESSICA Simpson has shared a rare photo of her nephew, Bronx, in honor of his 14th birthday.

The teenager is Jessica‘s sister, Ashlee’s eldest child, with her ex-husband, Pete Wentz, 43.

On Sunday, the singer took to Instagram to give the birthday boy a shoutout, including a sweet snap of the pair.

Jessica, 42, and Bronx posed alongside a rectangular cookie cake decorated in white and green icing.

They smiled at the camera, with Bronx wearing a hoodie and blue jeans while his aunt sported jeans and a black leather jacket.

She completed the look by styling her blonde locks straight down.

Jessica gushed over her nephew in her caption: “Happy 14th Birthday BX!!! I love you SO very much. You are a gift to everyone who is lucky enough know you, love you and be loved by you.

“Being your Aunt…has been…WILL ALWAYS BE…one of the most precious blessings of my life! Thank you for being YOU! @ashleesimpsonross you are my role model.”

The singer’s followers were shocked at how grown the middle schooler looked as one person commented: “Aww he is cute. Geez 14?”

Another echoed: “He has grown so much!!” while a third chimed in: “feels like yesterday he was just a baby!”

The group was celebrating Ziggy Blu’s birthday with a Halloween-themed party.

Around the same time, Jessica sparked concern from fans after showing off her over 100-pound weight loss in a new video.

The clip was an ad for Pottery Barn Kids that was posted on Instagram.

While the focus was supposed to be on the products featured in the room, most comments were about Jessica’s appearance.

“Is she OK?” one commenter asked.

Another wrote: “Respectfully … she looks frail,” along with a sad face emoji.

“Wow!! She lost so much weight. I hope she is OK. She’s a beautiful lady,” wrote another fan.

Another concerned fan wrote: “OMG. She does not look well. Her eyes are so sunken. Something is not right.”

“Too thin! She looks unhealthy. Why does her speech seem slow/slurred?” another fan asked.

Jessica later clapped back at speculation that she’d gone overboard with her weight loss.

She shared a video of herself belting out her ballad at home, singing: “I’m not weak ’cause I don’t want to fight/

“Holding me down/ It’s a love song/ Party of one/ I know it’s bad for my health to hate myself.”

The former reality star shared a lengthy caption alongside the video, in which she hit out at people’s “incessant nagging” and “hate.”

Jessica wrote: “As much as I have learned to block out destructive noise…peoples’ comments and judgements can still hurt deeply with their incessant nagging ‘you will never be good enough.’

“The most important thing I have learned through the last 5yrs without alcohol being a guard for escapism, is that I CAN and ALWAYS WILL get through it.

“I feel compassion for the opinionated hate that some people can so effortlessly just blurt out with such intensity on social media.”

She went on: “We all have our days of wanting to be, look, do, and feel better. Nobody is alone with that feelin’ that I can promise you.

“I woke up at the same time anxious and insecure but also angry and defensive — like some of you.

“Don’t give up on yourself because someone else did. Stay true to YOU. It has worked for me in this chaotic life thus far.”

Jessica concluded: “Nothin’ and nobody will rob me of my joy. Ya might come close but it is mine to own. Yours should be too.”

The MTV alum’s significant weight loss began after she started her journey to sobriety in 2017.

GettyJessica is also a mom to Jagger and Ziggy Blu with her husband, Evan Ross[/caption]

Refer to CaptionJessica clapped back on social media saying, ‘nobody will rob me of my joy’[/caption]