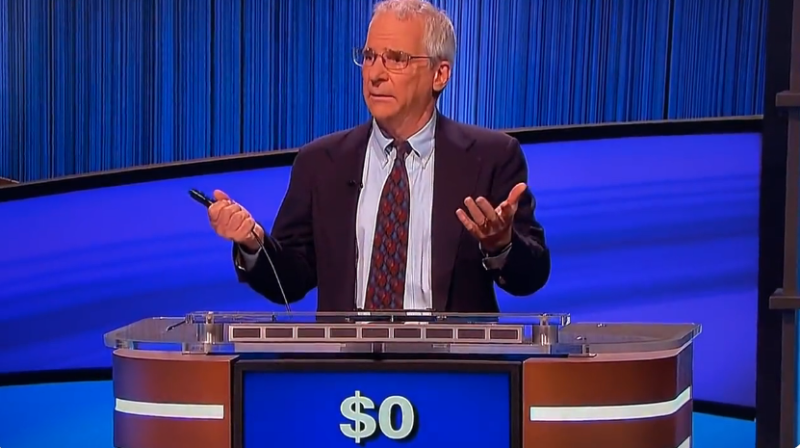 Sam, who has a secret rap career, faced the prompt during the Tournament Of Champions final last week.

NBCHe correctly answered ‘Doja Cat’ when presented with this prompt[/caption]

Host Ken Jennings, 48, read out in a deadpan voice: “This ‘feline’ not only got ‘freaky deaky’ with Tyga, she also told us to ‘get into it (yuh).”

Without missing a beat, Sam confidently pressed his buzzer.

The fan-favorite spread his hands like the clue was obvious and declared: “It was Doja Cat.”

Ken looked stunned, before replying: “Yeah…! You’re a fan I can tell!”

Viewers went into a frenzy over the scene, with one dubbing it the “best TV moment of 2022”.

One tweeted: “Sam the Professor Champion buzzing in to correctly answer Doja Cat in the Jeopardy! Tournament of Champions final was one of the best tv moments of 2022.”

Another posted: “Sam Buttrey Doja Cat fan reveal has got to be a top ten jeopardy answer of all time.”

A third added: “You have no idea how excited I got when Sam got the Doja Cat clue. #jeopardy.”

“Sam getting Doja Cat on #jeopardy is my season highlight,” yet another viewer declared.

Sam also gained many fans when he revealed that he produces “offensive” comedy songs.

The associate professor of operations research in California told Ken on stage during the ongoing finals: “I’m a keyboard player but with the help of computer software I can create entire songs that I think are hilarious.

But in reality range from the unfunny to offensive,” he joked.

“I’ll be making you a mixtape of my two favorites: ‘The Colonoscopy Song’ and ‘Don’t Put Your Cat Butt in My Face,’” Sam jokingly promised.

Sam’s SoundCloud page was found and became a smash hit with Jeopardy! fans.

The page has 19 tracks total and the genres range from reggae to rap to country.

In The Colonoscopy Song, Sam sings: “When you get to be the big 5-0 like me you’re filled with wisdom and maturity.

“And there’s another side of life that you’re ready to see – you get to have a colonoscopy. You get to see your own butt on a big TV.”

“Far, far better than your average SoundCloud rapper, to be sure!” another wrote.

This year’s tournament has featured more super-champions (or 10 regular season wins) than any year prior – four prior victories are needed to be considered, or winning the professor’s or college tournament.

But one after another, super-champs like Ryan Long, Jonathan Fischer, Matt, and Mattea got kicked to the curb, now, it’s down to the final three with only one super champ left.

Sam has technically never lost and made it after beating Matt Amodio.

The first player to win three matches gets the $250,000 grand prize and serious bragging rights.