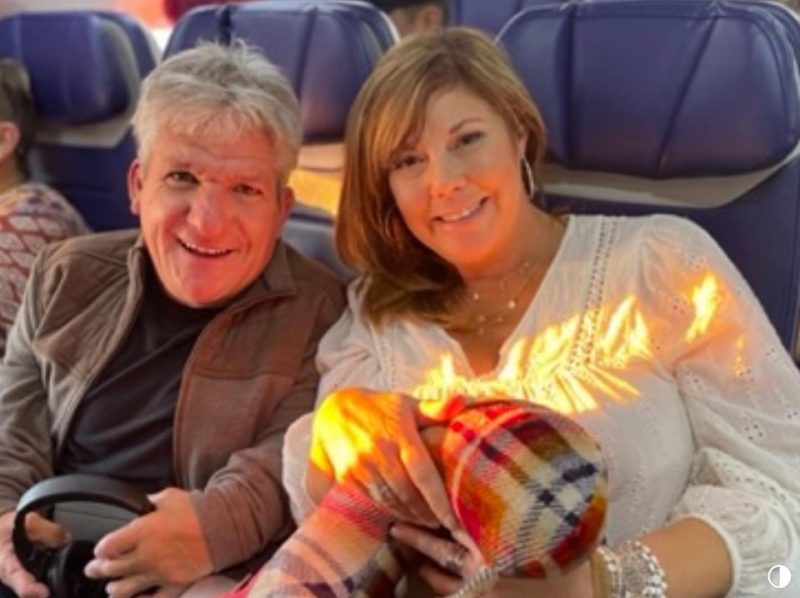 On November 18th, the LPBW alum and his girlfriend, Caryn Chandler, got on a plane and traveled “across the country.”

Matt shared snapshots while he was high above the ground and flying in the air.

He captioned the post: “Headed out of dodge at the crack of dawn yesterday across the country to go celebrate Thanksgiving with 6000 other people.”

On November 19th, Matt’s son, Zach, 32, and his daughter-in-law, Tori, 31, celebrated the third birthday of their daughter Lilah.

Tori wrote: “You have grown so much in confidence and sass this last year! You are so much fun and love making us laugh.

“I love how silly and sweet you are. You are the best big sister ever, and you help keep both of your brothers in line!”

Although Matt did not attend the festivities, his ex-wife Amy, 60, attended the birthday bash.

In an Instagram Story, Amy can be seen with the birthday girl as Lilah unwrapped her pink present.

Tori and Zach are the parents of two other boys: Jackson, five; and baby boy Josiah.

In an online thread, fans speculated there was tension between father/son after he refused to introduce his girlfriend to his youngest grandson.

Tension started brewing ever since Matt decided to put up 16 acres of the family’s plot for sale.

In a recent preview, Zach revealed: “Everyone’s met Josiah, but we don’t have plans for Caryn to meet Josiah.”

He continued: “Like, they still think they did nothing wrong.”

One fan theorized: “Matt and Caryn presumably did not attend Lilah’s birthday party.

“Because they are still not getting along with Zach and Tori.”

Another fan claimed: “Based on the show, Tori doesn’t want Caryn around. Zach hasn’t said that outright.”

A third fan suggested: “We don’t even know if he was invited.

“After last season, their relationship is probably not in the best shape.”

A fourth person chimed in: “No one wants them there. So they didn’t get an invite to the party.”

An insider recently told the U.S. Sun that Caryn is eager to leave the farm behind and retire.

The source explained: “Caryn and Tori are definitely not as close as they used to be.

“And the feud between the sons has been a lot.

“Caryn is ready to just have Matt hand the farm over and they can go to Arizona and retire.”

The insider concluded: “That would be her dream scenario, but whether Matt agrees is yet to be decided.”