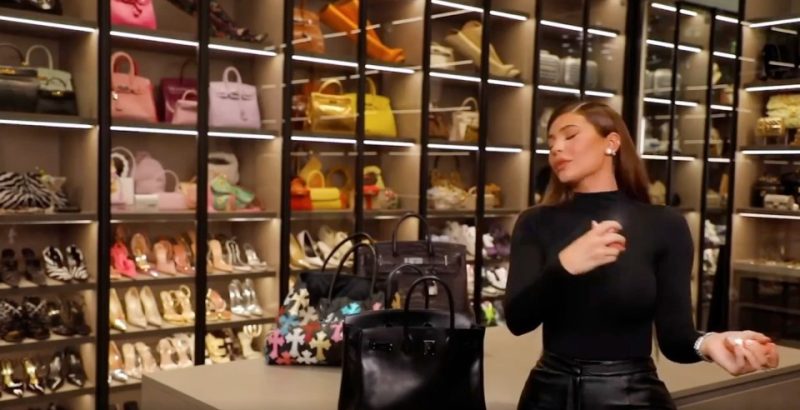 KARDASHIAN fans have been split over Kylie Jenner’s wild perfume-spraying technique in a resurfaced video of the star.

She showed fans how she likes to ensure she gets fully coated in her scent of choice and some found her ways a bit excessive.

Fans of Kylie, 26, dug up a clip from 2020 in which she showed off what she keeps in her bag, including a perfume that she teamed up with her sister Kim Kardashian to create.

“I love just reapplying,” she proclaimed in the video.

The mom-of-two then proceeded to spray several sprays on each shoulder, down around her belly button, and in a half-circle around her head.

A portion of the video was reposted on TikTok, where fans shared their thoughts in the comments.

One critic wrote: “That’s WAYYYY too much.”

A supporter, however, wrote: “Women’s perfume isn’t that strong to not be subtle you can apply a lot and it’s still quite subtle.”

Someone else wrote: “Literally one spray is good.”

A fourth fan commented: “That’s how I put on perfume lol.”

Kardashian fans have been on Kylie’s case for days now.

Recently, the makeup mogul was slammed after her big sister Kourtney Kardashian showed off the makeover her younger sibling gave her.

Followers picked the Lemme founder apart after she attempted to pull off Kylie’s signature lips.

The eldest of the Kardashian sister shared a selfie to show off the results of her glam by Kylie.

Kourtney pouted her dark pink lips, which were heavily lined and appeared to be coated in layers of matte lipstick.

Wearing a leopard print gown, the Hulu personality captioned the post: “Kylie Jenner did my makeup. That’s all.”

Fans were quick to tear the look apart.

Kylie normally gets her own glam done by her full-time makeup artist Ariel Tejada.

The two are close friends, and recently, he mocked her with a humbling comment during a TikTok video.

The Keeping Up With the Kardashians alum shared a video to the platform where she was showing off one of her usual stunning looks from the makeup chair.

But Ariel could be heard off-camera saying: “Do you like the unevenness of your water line, like your lip line?”

The reality star looked taken aback by her employee’s off-key comment as she shot him a stern glare.

Fans have also been buzzing about the star for other reasons – namely her flawless figure.

Kylie recently showed off her postpartum physique during a recent episode of The Kardashians.

She told viewers: “These are the years that I’m supposed to be naked.”

In a preview for the upcoming Season 2 finale of The Kardashians, Kylie prepared to get ready for the Billboard Music Awards.

The clip saw the Hulu star trying on her outfit for the event, which she attended alongside her baby daddy Travis Scott, 31.

Kylie wore a “naked” illusion Balmain dress that hugged her curves just months after the birth of her son.

The gray ensemble gave the illusion of being see-through and emphasized her wide hips and toned stomach.

Tying on the outfit with her team, Kylie flicked her hair back and said: “I like the vibe.”

In a confessional, she revealed that she was feeling proud of her body and looking forward to showing it off on the red carpet.

“I’m still a mom, but these are the years that I’m supposed to be naked,” she began.

Kylie and Travis attended the Billboard Awards in Las Vegas in May, which was three months after the birth of their son, formerly known as Wolf.

The pair brought along their four-year-old daughter Stormi to the event.

Since giving birth, Kylie has been feeling confident about her post-baby body.

The E! alum has shown off her enviable curves on many occasions in a variety of sexy outfits.

The Mega AgencyShe was praised for showing off her figure during a recent episode of The Kardashians, though[/caption]