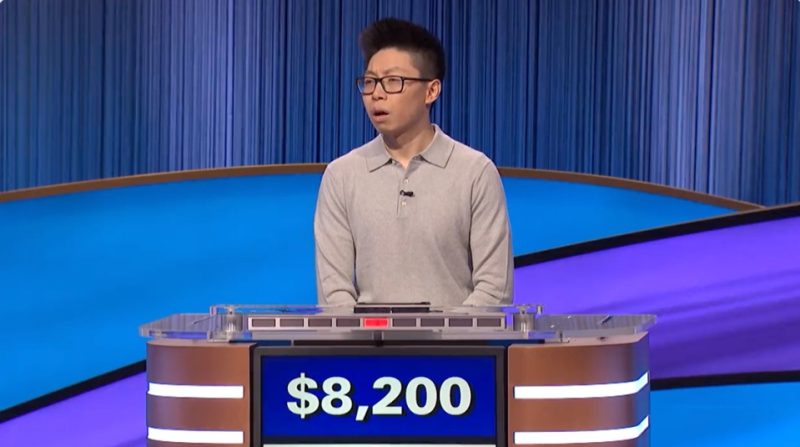 JEOPARDY! host Ken Jennings has taken the blame for a challenging clue that seemed to get the under the skin of player Andrew He.

The legendary former champion owned up to his part in the incident online,

Ken, 48, took to Twitter to weigh in on a “‘tough clue” from a previous Jeopardy! episode.

The clue appeared in a category called “Spelementary,” which asked players to spell words using the symbols of the elements given.

He quote tweeted a snippet of the episode shared by the show’s Twitter account, adding some info of his own.

Ken wrote: “I confess: the tough $2000 clue here was my fault. I was lobbying the writers for a real expert-level one and just wound up annoying Andrew and Amy Schneider! (Sam Buttrey probably didn’t mind.)”

In the episode, Andrew buzzed in and was given the following clue: “Arsenic + Tellurium + Radon.”

He began to answer but paused to think and ran out of time.

The player let out an audible sigh, showing his frustration.

His competitor Amy then buzzed in, incorrectly guessing: “What is Astor?” as no one was able to get the answer.

Fans have been buzzing about the famous game show for more reasons than its complex questions.

Sam came from behind to win on Friday, extending the Tournament of Champions finals against all odds.

Amy has won 40 times and was facing off against Andrew – a six-time champ and the fan favorite – and Sam in the finals.

The first player to win three matches gets the $250,000 grand prize- Andrew and Amy both have two wins.

So Friday’s episode could have been the end of the Tournament of Champions – instead, Sam entered the chat and put himself on the board.

“Everyone is very much in this Final Jeopardy which may be the final one of the tournament,” Ken admitted – it was not so.

Final Jeopardy under “English Cities” read: “William the Conqueror’s son built a fortress on a key Northern river in 1080, giving this city its name.”

Amy and Sam were correct with: “Newcastle” and Sam revealed he bet the house, a huge $11,200, and Ken was astounded.

“Everything depends on Amy Schneider,” Ken said, turning to the legend who has the second-most wins on Jeopardy! ever.

The crowd gasped as she revealed her small bet: “just 1800” Ken said – Amy slumped into her podium.

Then, the crowd erupted before Ken even announced Sam as the winner, he could barely do so as the applause boomed.

He picked up his first win of the finals with $22,400 and the audience, his rivals, and the internet went absolutely wild.

Fellow contestant Megan Wachpress tweeted: “The ToC audience was pretty evenly split as to favorite to win it all.

“But during the break before this game it became clear that *everyone* wanted Sam to win this one and the LOUD cheer that went up when he did (which you maybe get a sense of on TV?) was a glorious moment.”

Now all three have check marks next to their podium and game six of the finals comes Monday.

The California-based associate professor of operations research has endeared everyone with his knowledge and A+ personality.

Sam revealed during one mid-game chat that he is a SoundCloud beat maker.

“I’ll be making you a mixtape of my two favorites: ‘The Colonoscopy Song’ and ‘Don’t Put Your Cat Butt in My Face,’” Sam jokingly promised to Ken.

In another on-stage story, Sam acknowledged he knows he looks like famous actor Steve Martin, and his comedic delivery was a winner.

“Apparently a lot of people thought I looked like Steve Martin [when I won the Professor’s Tournament]. That’s an amusing comparison to me – I like it because not only is he hilarious…”

Sam added (turning straight to the camera): “But he’s also famous for being the most handsome man in the world.”