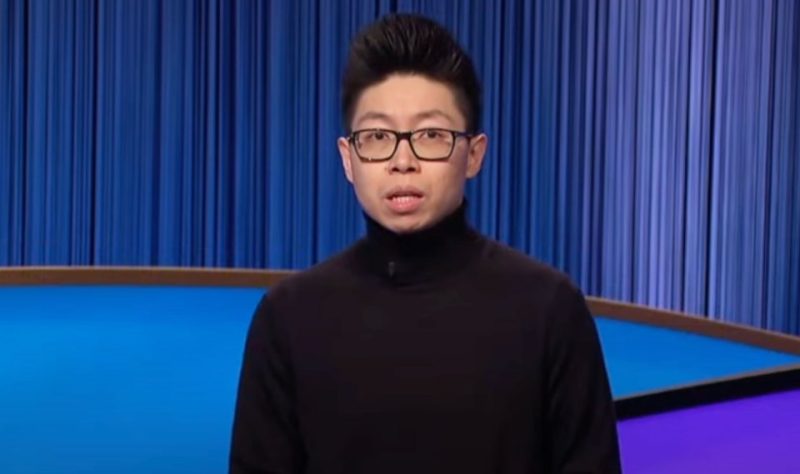 On November 15th, during the Tournament of Champions, Jeopardy! contestant, Andrew He, wore a black turtleneck sweater.

JeopardyAndrew He wore a turtleneck sweater during an installment of Jeopardy![/caption]

The Apple co-founder was typically seen in a black turtleneck and a pair of denim jeans.

Viewers jumped online and gushed over how Andrew’s fashion statement as he resembled the iPhone inventor.

One fan praised: “Andrew is killing it with the minimalist chic looks. A black turtleneck is classic ‘tech genius.’”

Another fan added: “I said to my wife: ‘Going for the Steve Jobs look.’”

A third fan mentioned: “I thought he was going to unveil the newest iPhone.”

A fourth person claimed: “Andrew, who’s from San Francisco BayArea and a software guy, would have definitely been up for a Steve Jobs reference.”

A commentator chimed in a To Catch a Thief reference: “Just before taping tonight’s game, Andrew stole a number of priceless jewels from wealthy vacationers on the French Riviera.

“He did not have time to change before taping.”

Even host Jeopardy! host Ken Jennings, 48, had something to say about Andrew’s black outfit.

During the Q&A portion, Andrew was in the middle of telling a story.

Ken interrupted and said: “I like this Sprockets look on you. This is a good look.”

The ABC star was referencing Mike Meyers’ devious Saturday Night Live character, who wore a similar wardrobe and had glasses too.

The crowd nervously laughed as the contestant did not appear amused.

Andrew looked down and shook his head.

Before being ousted from the Tournament of Champions, finalist Mattea Roach praised Andrew for how he gave a “master class on how to play Jeopardy in a tournament context.”

Mattea described him as someone “open-hearted and gracious in both victory and defeat.”

On November 18th, Sam Buttrey came from behind to win and extended the tournament finals against all odds.

The first player to win three matches gets the $250,000 grand prize.

Ken admitted: “Everyone is very much in this Final Jeopardy, which may be the final one of the tournament.”

Game six of the finals takes place on November 21st.

After the Tournament of Champions concludes, Ken will step aside from the iconic game show in January.

Co-host Mayim Bialik, 46 – now handling the Celebrity Jeopardy! spinoff- is expected to take over the reins.

Over the summer, Ken and Mayim were officially announced as the permanent replacements of the late Alex Trebek.

JeopardyAndrew has been competing against Amy Schneider and Sam Buttrey[/caption]

Jeopardy Productions, IncKen will be stepping aside as Jeopardy! host in January[/caption]

PrevPreviousMichael J Fox supported by his family and Back To The Future co-star Christopher Lloyd as he receives major honour
NextPete Davidson ‘needs to date a normal girl’ and NOT a celebrity, friend claims as comic ‘dates’ model Emily RatajkowskiNext