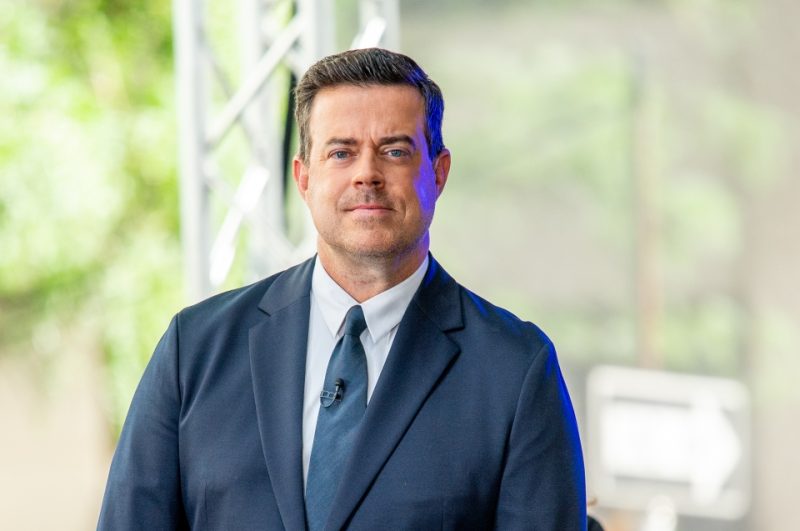 TODAY’s Carson Daly has a wild dating history from his romance with Tara Reid to being dumped by Jennifer Love Hewitt.

Daly’s dating drama first happened when his split up with the I Know What You Did Last Summer actress,.

The two dated in the late 1990s after they met in the MTV scene.

Their romance ended when Carson found out Jennifer dumped him over the radio.

“I woke up to Howard Stern telling me my relationship with [Jennifer] was over,” Daly told PEOPLE in 2000.

“Then I heard Steve Kmetko on E! say, ‘Just off the Associated Press: Jennifer Love Hewitt and Carson Daly have officially broken up.’”

When Daly, now 49, confronted his ex, he said: “If we were going to break up officially like this, maybe we could have just talked about it.

“I don’t see why you had to tell your publicist. And now I have been publicly humiliated.”

In 2005, Love Hewitt came on Last Call With Carson Daly to hash things out.

On the show, Daly admitted to getting a tattoo of Love Hewitt’s name on his leg, which was since covered up, allegedly at Tara Reid’s demand, with a crab claw pocket knife.

Daly told his ex: “I blame the breakup on you, you blame it on me.”

“For the time being, no matter what happened, I was a really good girlfriend to you and you were a great boyfriend,” Love Hewitt told Daly.

“We had a lot of fun and it was a good time in our lives and we should end it like that.”

“It really was,” Daly said, but added that “it ended a little weird, I got to be honest.”

Jennifer agreed but didn’t think it was worth such a fuss, remarking: “It did, but that doesn’t matter,” she said.

Although he reiterated that it was “weird,” Carson eventually conceded that it “doesn’t matter.”

They got engaged just seven months after their wild getaway and they were sharing an apartment in New York City but their romance was fleeting.

Reid initially postponed their summer wedding to film The Guest, but then the couple decided to cancel their engagement in 2001.

Daly said he “dodged a bullet,” by not marrying Reid.

He told ELLE in 2013: “To some extent, I dodged a bullet. I was getting serious about my career, and she wanted to shoot movies and just party [during] her time off.

The Today show host wanted to share his life with a “regular person.”

He said: “I realized I’d have more in common with a regular person than with a celebrity.”

GENIE’S OUT OF THE BOTTLE

Daly even had a rumored romance with pop star Christina Aguilera.

The two reportedly dated in 2002 while he was the host of MTV’s TRL.

Eminem added fuel to the fire in his song The Real Slim Shady.

He rapped: “S***, Christina Aguilera better switch me chairs. So I can sit next to Carson Daly and Fred Durst.

“And hear ’em argue over who she gave head to first.”

However, Aguilera denied the claims that Eminem wrote.

“It’s disgusting, it’s offensive and, above all, it’s not true,” her rep told the New York Daily News at the time.

Daly also reportedly had a couple of flings with stars like Jamie Pressly from Not Another Teen Movie and singer Ashlee Simpson in the early 2000s.

The TV host finally slowed down with his now-wife Siri Pinter after meeting on Last Call With Carson Daly in 2002.

Pinter, now 41, started working there in 2005 as a writer’s assistant when she hit it off with Daly.

The two initially kept their romance a secret before they went public.

Daly and Pinter stayed in a relationship for several years before they eventually tied the knot in 2015.

The couple has four children together including one son and three daughters.

While Daly announced that him and his wife filed for a “sleep divorce” over the summer, they are still very much so together.

Jennifer Love Hewitt (pictured) dated Daly in the late 1990s before she dumped himGettyDaly is now married to Siri Pinter, 41, (pictured) and they have four kids together[/caption]