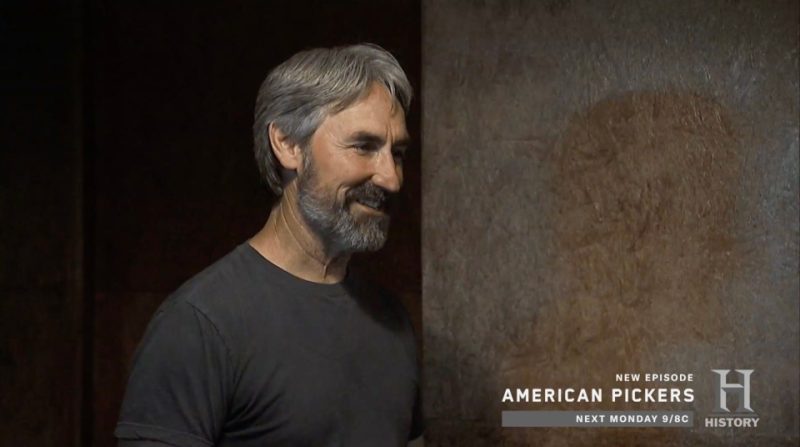 AMERICAN Pickers’ Mike Wolfe has gone on a getaway with a famous country singer while his co-star Danielle Colby recovers from surgery.

In an Instagram photo, Mike, 58, claimed he was “chilling with” Sleepy Little Town singer JT Hodges.

The American Pickers star took a snapshot of the Hunt You Down hitmaker while he stared at the fireplace.

The History Channel claimed they were watching the Italianate fireplace from the 1909 Historic House In Columbia, Tennessee.

Recently, Mike was on another getaway, this time around with his girlfriend, Leticia Cline, in New York.

The couple sat at Frank Sinatra’s table at the an Italian restaurant, P.J. Clarke’s, in Manhattan.

Mike’s brother Robbie Wolfe, and Jon Szalay – who also works on the reality show – joined them at the famous table.

Meanwhile, in a recent Instagram photo, co-host Danielle, 46, surrounded herself with her adorable pet dogs.

She petted the head of one furry animal while the other canine licked her face.

Mike’s co-star star gushed: “I love being able to spend time with my grand doggers!”

Danielle mentioned her daughter Memphis, 21, has also been “taking good care” of her.

She closed: “The pups are doing their best too.”

The reality star has been in recovery since her hysterectomy, the surgical removal of the uterus.

In the meantime, the TV personality has documented the recovery process online and shared photos and emotions as she struggles to return to normalcy.

‘VERY DIFFICULT FOR ME

Danielle previously opened up about her mental health struggles in an emotional post to her Patreon followers.

The TV star confessed to dealing with bouts of depression: “While I’m incredibly thankful to have family accessible to me and have such wonderful children who will drop everything to help take care of me, the depression during this time has been very real.

“To be honest, the depression has been very difficult for me to deal with.”

She continued: “I am working through it in my way, but in part, it is preventing me from writing much because I don’t feel very many positive things right now, even though I realize everything that I am thankful for and the blessings I have.”

The TV personality admitted: “There are simply times when our brains do not want to understand because our brains simply get depressed.

“I can tell my brain over and over again how thankful I am, and somehow, at times, the depression wins out.”

Danielle concluded: “Very raw, struggling, but by no means suicidal or in fear of self-harm, just hurting physically and emotionally, so I am giving myself space to feel my deep feelings, grief, sorrow, anger, etc.

“I am working on being very intentional with my actions and words.”

Not known, clear with picture deskMike Wolfe shared a photo of singer TJ Hodges staring at a fireplace[/caption]

PrevPreviousWhat was Nicki Aycox’s cause of death?
NextKourtney Kardashian stuns fans as she reveals natural skin in new no-makeup video as she sprays product onto her faceNext