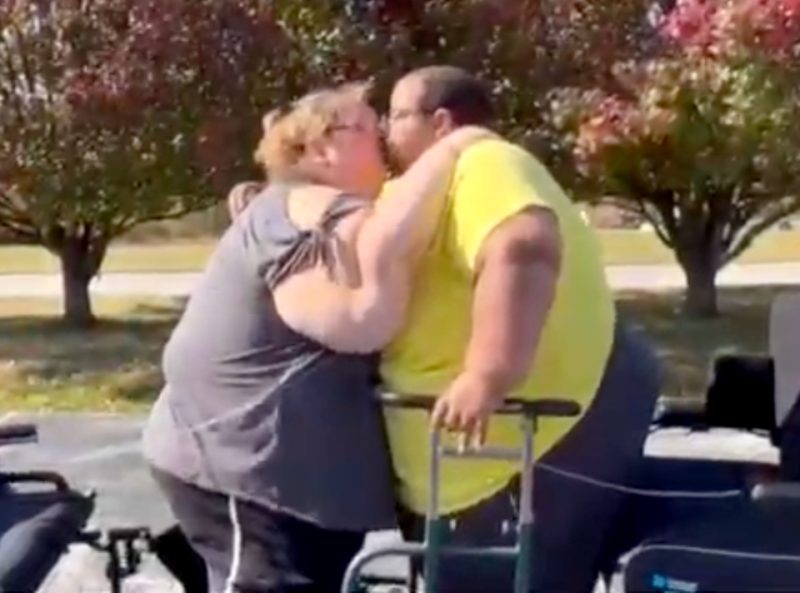 1000-LB SISTERS star Tammy Slaton is married to Caleb Willingham and tied the knot at their Ohio rehab center.

Over a short engagement period of nearly three weeks, Tammy is now hitched to her new weight clinic boyfriend.

People reported she became Mrs. Tammy Willingham on Saturday with a small celebration of 30 friends and family.

Her sister Amy was able to join the celebration.

Tammy looked lovely in a white wedding gown, veil and tiara, and held a bouquet of sunflowers.

The 1000-Lb Sisters star said: “You all knew me as Tammy Slaton, but now you’ll all know me as Mrs. Tammy Willingham. I’m married now!”

Previously, The U.S. Sun reported Tammy got engaged in October to her secret boyfriend at the time.

In a video shared exclusively with The U.S. Sun, Tammy accepted the sweet proposal from Caleb in the parking lot of her rehab center in Ohio.

Tammy has been through a fair share of tribulations on her road to love, and she met her new fiancé during her second stay at a weight clinic.

A source close to the 1000-lb Sisters star gushed: “She began dating Caleb in rehab, and I’m so happy they met in-person and were not dating online.”

It is uncertain at this time if Caleb will have the same release day as his wife, although once Caleb is released he has plans to move in with Tammy in her new Kentucky apartment.

Tammy moved out of the duplex she used to share with Amy that was robbed last fall when the TLC star first checked into her second round of rehab.

As Tammy has been slowly able to stand, walk short distances, and move on her own, she and Caleb have been looking toward more future plans.

The insider shared Tammy and Caleb are considering a big Florida trip in the future for their honeymoon plans.

The U.S. Sun previously reported Tammy lost enough weight for her bariatric surgery and is now even standing and walking.

A source close to Tammy exclusively told The U.S. Sun the procedure went smoothly and there were few complications.

However, once the surgery was complete, Tammy had to return to her weight rehab center to monitor her recovery progress.

Tammy’s sister Amy was even able to make the drive up to join the small celebration of 30 peopleTammy was engaged for three weeks and Caleb plans to move in with her in Kentucky after their release from the clinicTiktok/itsqueentammy86The US SunThe U.S. Sun previously shared the couple’s sweet engagement video in the parking lot of the Ohio rehab[/caption]