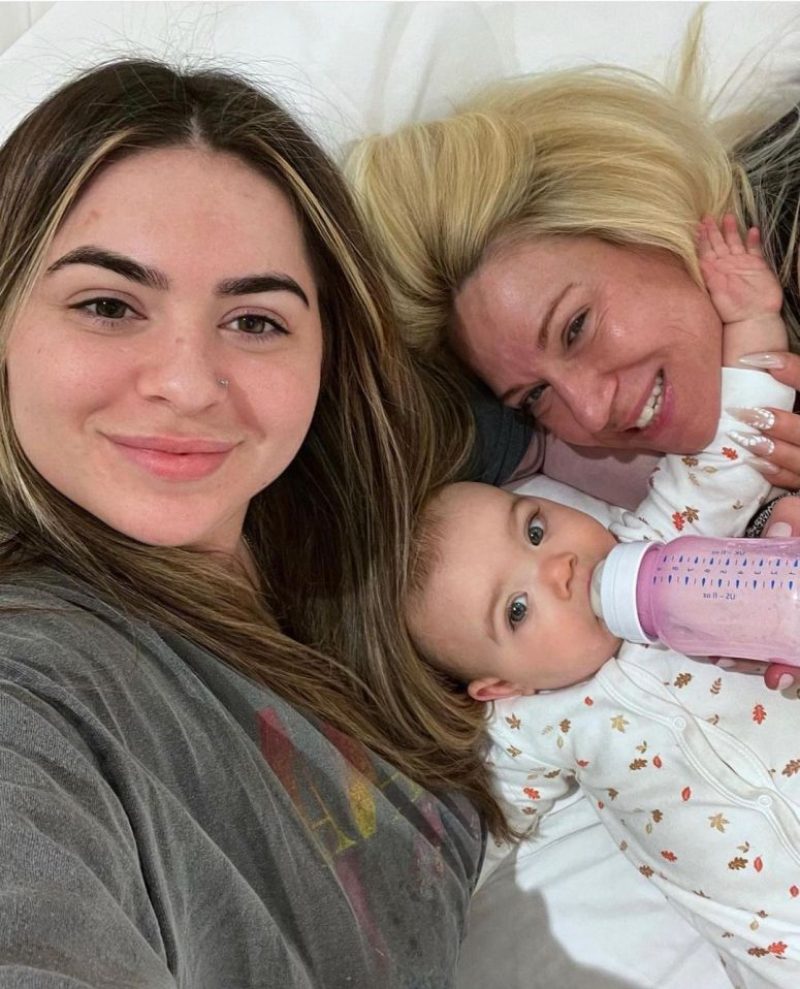 THERESA Caputo put away the makeup and hairspray, and went all natural for a photo cuddling with her granddaughter.

But it was the third member of the picture, Theresa’s daughter Victoria, that stole the show.

On Friday, the Long Island Medium shared a lovely shot of three generations together in one bed.

Theresa, 55, smiled wide as she laid on the bed with nearly nine-month-old Michelina Rose, who placed her hand on her grandmother’s chin.

The reality star’s trademark razor-sharp nails were painted a crystal color, as she laid her hand on top of the baby’s arm.

Next to them was Theresa’s 28-year-old daughter Victoria, who snapped the selfie.

The new mom also posed without any makeup, and fans couldn’t stop raving about her clean look.

“Victoria is absolutely beautiful without makeup!!!” one fan exclaimed as another added: “U look great Vic!”

A third joked: “Who’s that girl next to you? Wow didn’t recognize ur daughter.”

While one person gushed: “Natural beauty & so much love in this pic.”

The natural reaction was the exact opposite Theresa received just days earlier, when fans say she overdid her look.

Again, the star shared Instagram photos of herself with her granddaughter. But this time, Theresa was all made up.

In the first photo, the Medium carried the baby girl while holding a green handbag that matched her dress and heels.

The TLC star flashed a smile while teasing her curvy figure.

In the following snapshot, Victoria and her husband Michael posed together as they held their first child.

Theresa continued to flaunt her steamy dress as she stood next to the couple.

She captioned the post: “It was a beautiful night with family celebrating Mary and Tom.”

One person said: “Beautiful family! Lower the hair though! It takes away from your pretty face.”

Another added: “The hair,” along with a rolling eyes emoji.

“Not crazy about the hair! You’re too pretty to cover up with that mop,” a third user mentioned.

A fourth person wrote: “That mile-high hair though is ridiculous.”

“That hair is almost impossible now,” one commentator chimed in.

In another photo of her and her granddaughter, fans were worried.

One critic said: “Terrifying nails! You’re going to scratch the baby if you’re not careful.”

Another added: “I love you so much, but I think those nails and that long hair around that baby is a bit too dangerous.”

A third person mentioned: “Holding that baby with those long, sharp nails? Grandma, do what is right for the baby.”

One fan argued: “Just a PSA…I know you love them, but changing a baby’s clothes or diapers with those nails is going to be an issue.”

Another fan criticized: “Might have to rethink those false nails now, grandma.”

Another fan harshly recommended: “Be careful! Those talons don’t get her eye!”