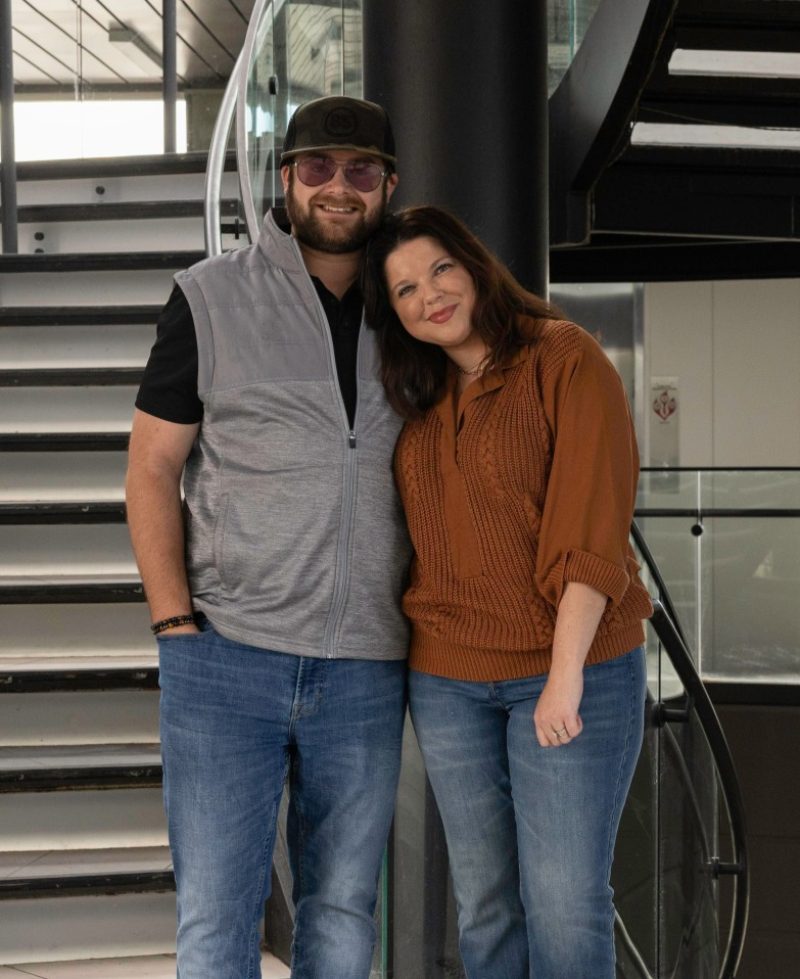 AMY Duggar and her husband Dillon King keep the romance in their relationship alive with a very racy Sunday tradition, the couple revealed in an exclusive interview with The U.S. Sun.

Amy and Dillon, who have been together for more than seven years, said for the first four years of their relationship they shed their clothes every Sunday and walked around their home naked together.

Amy Duggar, pictured with her husband Dillon, had a very racy Sunday tradition to keep their romance aliveAlex Kent for The US SunInstagram/amyrachellekingThe tradition is less frequent since the birth of their son Daxton in 2019[/caption]

Calling those years “the best four years”, the couple admitted that the racy routine now occurs less frequently following the birth of their son Daxton, who was born in October 2019.

“We waited four years [after getting married] before we had kids and it was the best four years,” gushed Amy.

“We got to have naked Sundays and all things like that.”

“Can’t do that anymore with a little three-year-old running around and jumping in bed,” added Dillon.

“It’s a lot different!” he laughed, revealing they’ll still sometimes indulge in the tradition if their son is visiting his grandparents.

When asked about any plans to potentially expand their family, Amy and Dillon insisted they aren’t in any rush though they do envision having one more child at some stage.

Something Amy said she won’t be doing is following in the vein of her uncle Jim Bob Duggar and Aunt Michelle, who had 19 children between 1988 and 2008.

The Duggar family shot to fame in the mid-2000s on the hit TLC reality TV show, 19 Kids and Counting, which followed Jim Bob and Michelle as they raised their 19 children under incredibly strict Christian beliefs.

“We’re very much in agreement about that,” added Dillon. “Two is still in question.

“We love one, but if we have a second, daddy is going to get snipped.”

Turning to Amy, Dillon then joked of Jim Bob and Michelle: “They’d freak out about that, wouldn’t they?”

Amy and Dillon say they don’t want a “huge gap” between Daxton and their prospective second child – who they may even consider adopting – but, for the time being, they say they’re both too busy with work to think about procreation.

Dillon and his business partners are preparing to launch a second branch of their restaurant and cigar lounge Wellington’s in Springdale, Arkansas, which will be opening its doors later this month.

Describing life as good but “busy”, the couple said they always make sure to spend quality time together when their busy schedules overlap.

“I call him my Tazmanian devil because he is just spinning in circles everywhere he goes,” Amy said of her self-professed workaholic husband.

“And I’m like cook, I got the kid, I got the house, I’ll see you later honey!

“[But] quality time is very important to us, so Sunday is our family day.

“Sunday is when I turn the phone off and the laptop doesn’t come out.

“And [in the week] he comes home from work in time for dinner, and he grabs Daxon and spends time with him and plays upstairs and does all the things he loves.”

Dillon added: “I try to be home by seven, that’s our rule … But Sunday is family day.

“Usually, we go to church, come home, and then from there, we figure out what we’re doing as a family – so zero work.”

In an earlier chat with The U.S. Sun, Amy revealed that she grew up secretly kissing boys, wearing swimsuits, and listening to rock music while her cousins lived under the strict rules of her ultra-religious uncle.

“I didn’t grow up in a strict house,” explained Amy, who is the daughter of Jim Bob’s sister, Deanna Jordan.

“Mine was more like, I had rock music, I wore swimsuits, kissed boys, and kind of lived life.

“But it had to be taken aback whenever I went to my cousins’ house.

“I would try not to wear something that showed my shoulders, I wouldn’t show my knees.”Amy added that she tried to “respect their rules,” even though she said she “didn’t understand them at all.”

Among the various rules Jim Bob and Michelle enforced was a ban on all dancing and modern music.

According to the Duggar mantra, modern music is too sexual and impure, and dancing could fuel sexual desires.

Additionally, all women had to dress modestly, covering their shoulders, chests, and legs – even at the beach.

The Duggar girls were expected to wear modesty swimwear that covered their bodies almost entirely.

The ill-fitting garb covered them from their necks right down to below their knees.

They were also not allowed to hold hands with their partners until they were engaged and were required to save their very first kiss for the altar.

Jim Bob even read all of his daughters’ text messages when they were growing up, replying to any messages himself that he disapproved of.

While Amy says she could never imagine growing up in such a strict and suffocating environment, she tried as best she could to “respect” the lifestyle Jim Bob was imposing.

“I did try to respect it to a point,” she said.

“I wasn’t going to be like, ‘this is me and I’m wearing all black…grrr!’” added Amy, imitating a ghoul.

“I wasn’t going to show them my kind of style and all that, so it was a really weird balance.”

While some of Amy’s cousins have since rebelled from Jim Bob’s rule, she estimates that at least half of them are still following her uncle’s laws to a tee.

“[They’re told] ‘you will love your father and mother and you will respect them and don’t ask questions. That’s your authority’ – and that’s just how it is.

“Even for me, I didn’t ask any questions for the longest time. I didn’t understand it, but I didn’t want to ruffle those feathers.

Amy’s husband, Dillon King, who was sitting with her during The U.S. Sun’s interview, was less PC in his opinions of the Duggar way of life.

“[Imitating Jim Bob and Michelle] ‘You don’t get a mind. Do what I say.’

DANCING WITH THE STARS?

Although Amy didn’t live under Jim Bob’s roof, some of her uncle’s beliefs also impacted her own life and career pursuits.

During the filming of 19 Kids and Counting – on which Amy frequently cameoed – she was approached to appear on Dancing With The Stars.

However, Amy was forced to turn down the opportunity because of the Duggar belief that dancing is a “sin.”

“I didn’t turn it down. Are you kidding me? I would have loved to have done it,” Amy excitedly declared when asked about the offer to join the competition.

Amy didn’t name who blocked her from participating in the ballroom dance extravaganza, but a source close to the family previously claimed to The U.S. Sun that it was Jim Bob who pulled the plug.

“Well, my family doesn’t believe in dancing, and … I was on the show at that time,” said Amy.

“And so it was turned down – very quickly – because … they did not want me to dance because that’s a ‘sin’.

“And I was told I couldn’t [take part] simply because that’s wrong and that’s not what women do.”

19 Kids and Counting was eventually canceled in 2015 after nine seasons and 227 episodes when shocking allegations came to light that Jim Bob’s son, Josh Duggar, had molested five underage family members as a teenager.

Amy began to distance herself from the family in the wake of the scandal.

She appeared on just five episodes of the family spinoff Counting On, which didn’t feature Josh, before deciding to quit.

Counting On was eventually canceled in June 2021 after Josh was arrested on child pornography charges.

When asked if she missed starring in either of the Duggar family shows, Amy insisted she didn’t but said she had fond memories from that time.

“The adventures were great,” she reflected. “I mean, we’ve been all over everywhere was insane and so fun [and] you can’t get that back, you know?

“So those are like, core memories that I have. But going forward, I really like where life is headed.”

Should the opportunity arise to star in her own reality show in the future, Amy said she’d be “up in the air” about the idea.

But, if she was able to truly be herself, without some of the “choreography” that can sometimes be orchestrated by producers on such shows, then she’d definitely consider it.

“I think I would if I could truly be myself, and what you see is what you get, then yes,” Amy said.

“With TV and cameras, as you can tell, there’s a camera on me right now,” she continued, gesturing to the lens, “and we have nothing to hide. The skeletons are already out there.”

PrevPreviousDuggar critics accused Jessa of ‘exploiting’ her daughter Ivy, 3, after tot is ‘forced to do despicable move’ in video
NextKardashian fans slam their Hulu show’s ‘worst season yet’ and beg for ‘boring’ & ‘painful’ series to be canceledNext